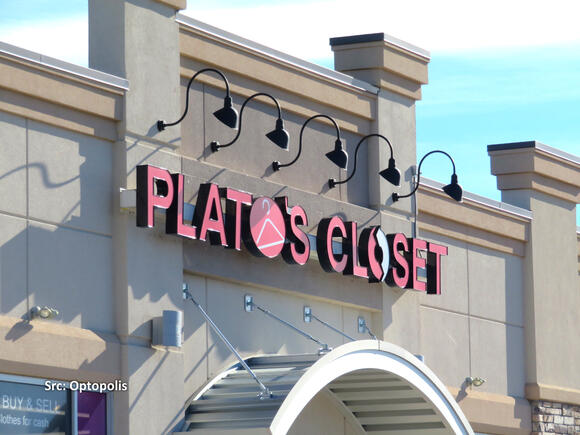 Another unexpected find when driving down Dell Range Blvd and vicinity, it seems Plato's Closet of Cheyenne has decided to shift north of Dell Range!

Plato's Closet appears to have first opened in Cheyenne around the turn of the 2010s near Mongolian Grill; Google Street View confirms they opened in this space between 2007 and 2011, and their local Face Book page displays 2010 for the date of the creation of the local store's page.

It does appear sometime in the last decade, they expanded this location into what is labeled as "Digits" in 2011 Street View, explaining why the store had two separate doors more recently.

About a decade after opening (in 2021), they decided to move to a new location; a sign still on the door of the old location clearly shows they temporarily closed in order to move, their Face Book page displaying October 26th as the date old location officially closed.

According to their Face Book Page, Plato's Closet opened at their new location near Michael's (between Rue Terre and Prairie Avenue) on November 6th. This building was built as part of the Cheyenne MarketPlace in 2007, this space being the first portion of this plaza building to be built as Google Street View shows.

The first tenant to open in this space was Famous Footwear which moved out of the Frontier Mall just a few years after opening in one of the several spaces now occupied by Joann's. Unfortunately, it didn't last much longer after the move, closing around the start of the new decade (exact year/date still unknown here at Optopolis).

Kirkland's, a home goods store somewhat similar to Pier 1 Imports, would be the second store to open in this space, opening by January 2013 as past versions of their website viewable on Wayback Machine confirm. Unfortunately, in spite of being in an otherwise still relatively new and thriving plaza, this Kirkland's closed in 2018.

Below is a video of what this space looked like when it was vacant in 2019.

This space continued to sit vacant/abandoned until September when the inside was began to see clean up, with a huge bin sitting out front of the soon-to-be Plato's Closet. Fortunately, it appears this relocation may have been good for Plato's Closet, with a rather busy parking lot with plenty of come-and-go visitors in this brief stop at the new location.

Is this location better than the old one? Will you be visiting the new Plato's Closet location soon? Let's chat in the comments!