Who Was Frankie Silver? Did She Really Murder Her Husband?

Looking pretty darn guilty was the 18-year old wife, Frances ("Frankie") Silver. She and their infant daughter were the only folks around when Charlie met his gruesome demise. Frankie was later hanged in Morganton North Carolina, sealing her fate as the first white woman ever hung in the state.

In the months that preceded her death, her father and brother made one last attempt to save her with an old-fashioned jailbreak! But sadly, in the end, Frankie still found her fate at the end of the rope of "justice."

But was it really justice? Was Frankie really guilty of first-degree murder, for which she was convicted? 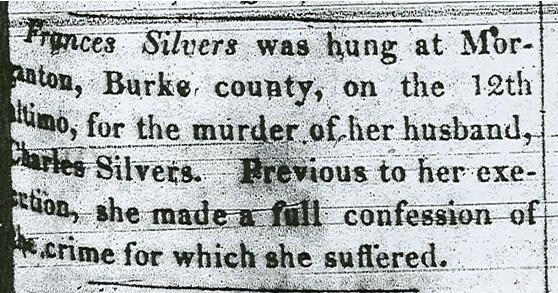 Frankie Silver's story has captivated me for years. In fact, I am a direct descendent of hers. As a woman, I look back on that time in history and wonder, what I would have done in a small cabin in the mountains, with a new baby, and a husband with the philandering and drunken reputation Charlie had? Many suspect, as do I, that Frankie — notably a very small woman compared to Charlie's much larger frame — did what she had to do when Charlie got out of hand. (Word had it, he'd been off on a bender rather than a hunting trip, leaving her alone with their new baby for days before that fateful night.)

A woman of that time would have wielded an ax just fine, I think. But balance her infant's care with the butchering and dismemberment of a full grown man, clean it all up, and then carry on as if nothing happened — all by herself? Doubtful. Frankie most likely traveled the snow-covered miles on foot, carrying her infant daughter, to her family's home and elicited the help of her father and brother to help get rid of old Charlie.

The all white, male jury convicted a silent Frankie in the two-day trial. The judge sentenced Frankie to execution by hanging. Story has it, as she was hanged she sang a song that has weaved its way into North Carolina history:

This dreadful, dark and dismal day
Has swept my glories all away,
My sun goes down, my days are past,
And I must leave this world at last.

Oh! Lord, what will become of me?
I am condemned you all now see,
To heaven or hell my soul must fly
All in a moment when I die.

~read the rest of the song lyrics here: NC Wiki

Though the lore of the region claims Frankie penned the song from the confines of her jail cell, and it was later printed in the local paper some 50 years later, the folk song is more likely the creation of local gossip and a gifted poet. Rumor has it when Frankie died, her father shouted "Die with it in 'ye, Frankie!," a warning for her to keep her secrets (and his?) for the grave.

Only a song of her memory, mystery and speculation remain. The tragedy of her sex and vulnerability, her isolation and desparation, all doomed her to the gallows at the young age of 18.

Frankie Silver was hung in Morganton North Carolina on July 12, 1833. Charlie Silver is now buried in three separate graves in the no-where's-ville town of Kona, North Carolina, deep in the Appalachian Mountains.

I am thankful her daughter, Nancy, survived. She bore the family line that led to me! For more interesting North Carolina history, visit Cultural Resources online. And take a look back at your own family history. What's in your bloodline?

Catawba River, Rock Hill, South CarolinaPhoto by the author. Hello readers. It’s been a while! I no longer reside in the Asheboro, North Carolina community, where I have lived, worked, and reported local news for the past year. Thank you to the residents of Asheboro for your friendliness in spite of a difficult time for many of you.

To have a safe New Year’s holiday you need to make safe choices for yourself and your family. As a refresher on New Year's safety tips, we’re here with a short-list to help Randolph County residents to keep safety in mind.

Asheboro Parties to Ring in 2022

If there’s one thing Asheboro peeps know how to do, it's party. And to ring in the year 2022, after two consecutive rough years for us all, Asheboro is gearing up to bring in the new year with a bang. If you aren’t sure where to go to celebrate the turning over of the year, consider these events and happenings around town – and above all, be responsible and safe for the New Year’s celebrations!

Harbor sealsPixabay License Free for commercial use No attribution required. It’s never easy to lose an animal, whether a beloved pet or an animal you are caring for, like with those animals who live at Asheboro’s zoological park. Some 1800 animals call the zoo their home, residing on the over 500-acre expansive zoo property, nestled within 2600 wooded acres in Randolph county. These animals of over 250 species are cared for by a staff of over 600 people and over 300 volunteers and interns.