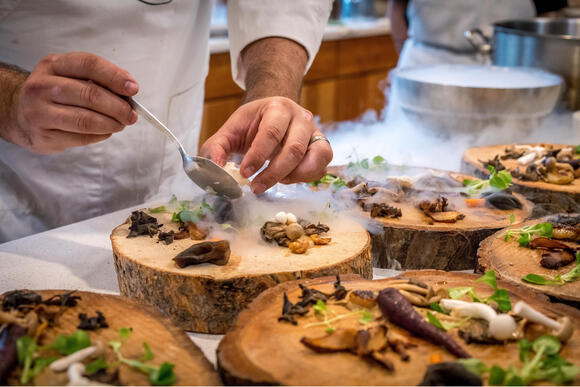 Can you imagine yourself working 50 years in the industry, retiring, but going back to work? If it sounds unreal for you, it’s a real story for Uncle Lou.

He has lived in Manhattan’s Chinatown for nearly 50 years. During this time he worked at restaurants, newspapers, and other fields. He was trying his best to get a solid income and was greatly rewarded by life. It was time to retire and spend his 60s at home.

Once he started his retirement, he said:

“I was so frustrated sitting at home,” he explains. “Like my ex-wife says, every day I wake up, I’m the first one to leave the door. She didn’t like it either. That’s how we broke up.” - Louis Wong in Grub Street

He decided that retirement isn’t for him and started to work again. His restaurant Uncle Lou is located on Mulberry Street. The owner enjoys carrying about this place just because he loves his restaurant industry.

If someone asks Uncle Lou why he is still working, he replies that he loves what he does. It seems that sitting at home is a boring routine which doesn’t bring any pleasure. This is why Uncle Lou prefers to work in his favorite industry and enjoy the results he gets from it.

If you check Yelp’s page, you’ll find so much positive feedback about this place. It proves that Uncle Lou isn’t running after money, but enjoys the things he does at his restaurant.

People enjoy the quality of food, restaurant place, and interior. Uncle Lou does a great job, and it doesn’t matter how old you are. If you love what you do, you can’t even call it a job. Instead, it’s your hobby, an interest that motivates you to live and connect with people.

Everyone wants to make their homes as comfortable as possible. You used to think about your home as a place to relax, connect with family and enjoy your life. This is why you do your best to improve your home on an ongoing basis.

Photo of Woman Taking Order From a CustomerPhoto by Andrea Piacquadio from Pexels. Money is important for all of us. You can pay for your apartment, bills, and live a stable life. Many people enjoy their lives by visiting cafes, restaurants, and travel worldwide. But once COVID-19 hit our life, everything changed.

Where You Can Spend $1.50 on Street Food in NYC

Close-up Photo of a BurritoPhoto by Pixabay from Pexels. The city that never sleeps is one of the best places to eat and from what some people say, it’s also the place with the best street food. It can be difficult to eat on the go as you’ll probably need a snack or something quick when you’re heading somewhere, and New York offers a variety of options for anyone craving something special.

Black-Owned Restaurants in NYC That Are Worth Visiting

Cheerful black women taking pictures on food on smartphonePhoto by ROMAN ODINTSOV from Pexels. The African diaspora in NYC has been growing at an exponential rate over the past decade. African-Americans have become a substantial portion of the metropolitan population, and the immigrant communities from other nations have grown rapidly as well.

Olympics Live Updates 2022 for the USA

Four Person Riding on Snow MobilePhoto by Pixabay from Pexels. If you love sport, then you’re curious how things are in the Olympic Games in 2022. They started on February 4 and will last until February 20.

The Future of Restaurants Is in the Suburbs, Big Cities Aren’t Needed Anymore

Aerial Photography of RoadPhoto by sergio souza from Pexels. We used to think that a variety of restaurants is possible only in big cities. The more city is, the better restaurant choice you’d have.

Tasty dishes, amazing restaurant experience — this is what tourists love the most. When you plan your travel journey, it’s important to spare enough time to find the best places to eat and rest.

Set of blood test vials arranged on pink tablePhoto by Alena Shekhovtcova from Pexels. Since the pandemic started, we all want to end it as soon as possible. We already have many vaccines, tests, and life is slowly going back to normal.

Where You Can Buy Last-Minute Food Gifts in NYC

Photo of MacaronsPhoto by Jill Wellington from Pexels. Many people visit NYC every year. If you’re a lover of this modern, urban city, you might want to buy something special. While most people would prefer to go with physical products, like T-Shirts and souvenirs, there is a special gift you can buy. These are food gifts.

If you live in NYC or plan to visit it, it's time to think about what cuisines you want to try. NYC has a variety of restaurants, bars, and cafes. While it's easy to book a hotel or apartment, it takes time to find a restaurant with a great location and quality cuisine.

Best NYC Pho Restaurant Is Not Going To Work Anymore: Who Is Next?

We all love to go out and have an amazing dinner. NYC is one of the best places in the USA for comfortable living with many dining out options. Many foreigners come to New York to take Instagram pictures and visit restaurants to try different cuisines.