Nick Fiorellini is a freelancer writer from the Philadelphia area. 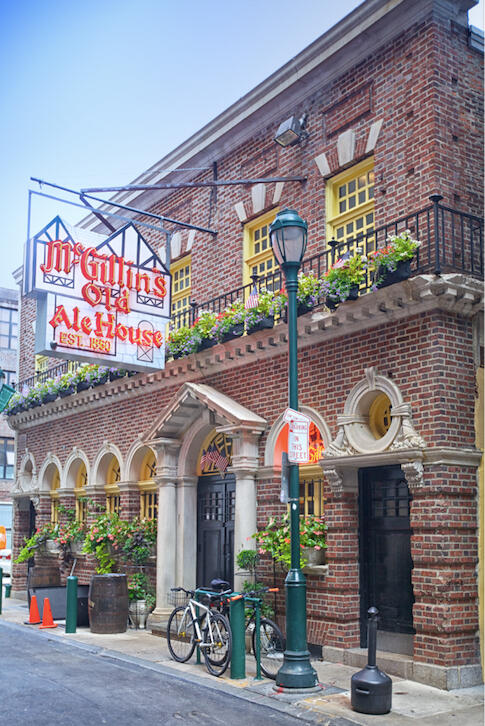 They opened the year Abraham Lincoln was elected president. They’ve survived two pandemics and prohibition. They’ve stayed open longer than some of Philadelphia’s most iconic institutions.

McGillin’s Olde Ale House in Center City is Philadelphia’s oldest continuously operating tavern. The bar was opened as The Bell in Hand Tavern by Irish immigrants Catherine and William McGillin, who raised their 13 children upstairs, in 1860. Catherine and William became known as “Ma” and “Pa”; the laborers who frequented the bar called it “McGillin’s” — and the name stuck, becoming the official moniker in 1910.

The bar remained in the McGillin family until 1958, when brothers Henry Spaniak & Joe Shepaniak (who use different spellings of their last name) bought the bar from Mercedes McGillin Hooper, Ma and Pa McGillin’s daughter. Three generations later, McGillin’s is still in the family, co-owned by Mary Ellen, Chris Mullins, Sr., and Chris Mullins, Jr. — and is brimming with Philadelphia history, from a catalogue of every Liquor License held by the pub since 1871 to over half a dozen historic signs from some of Philadelphia’s most famous shuttered businesses and restaurants.

But the coronavirus pandemic threw a wrench into how McGillin’s operated.

On the day before Saint Patrick’s Day last year, Philadelphia entered lockdown. It was the first time the bar’s tap was actually shut off. (During prohibition, Ma McGillin hired a chef and served food and ice cream downstairs; upstairs, she served “tea”.) And unfortunately, some long-time staff of McGillin’s have passed away due to coronavirus.

To adapt to restaurant regulations, McGillin’s had outdoor dining for the first time in over 160 years. Events hosted by the tavern, like their 161st Saint Patrick’s Day celebration, were partially held outside and socially distanced.

McGillin’s taught everyone: You can teach an old dog new tricks.

But as the city and country reopen, McGillin’s is still adapting to the ways the pandemic continues to shape life in the city.

“Now that we’re open with indoor dining, we’ve got everything looking like it’s back to normal,” Chris Mullins, Jr. tells News Break. “But the one thing that just hasn’t quite yet returned to normal is our menu. It’s about 50-60% smaller than it once was. There’s really hardly any lunch business [because] most workers haven’t returned to their offices. With fewer conventions, it’s also slower in the evening.”

The result, he says, is a menu that consists of a few staples, like meatloaf and shepherd's pie, along with sandwiches and appetizers.

And while, as an institution, McGillin’s has made it through the pandemic, the same can’t be said for some of its partners, Chris Mullins, Jr. explains:

“We have been serving, for the last 25 years, Stoudts Brewing Company. It was a family-owned brewery in Adamstown, Pennsylvania. Unfortunately, the pandemic was the last straw [...] and the family decided to not reopen. They were a huge partner for us; they brewed our house ale, our house lager, and our house IPA.”

“When we kind of get back to the real operation [around] October, we are going to be a different place with different beers, different faces,” Chris Mullins, Jr. says.

Nick Fiorellini is a freelancer writer from the Philadelphia area.

BALA CYNWYD, PA – Do you like breakfast food?. Because the Vandiver-Moylan Post 355 in Bala Cynwyd is serving it hot on Saturday, November 13 at their third annual Veterans and First Responders’ Breakfast. The meal will include pancakes, sausage, bacon, coffee, and orange or cranberry juice. All veterans and first responders are welcomed and eat for free. Families and loved ones are asked to make a donation to the Post.

PHILADELPHIA, PA – Hello, Philadelphia!. Today is Thursday, October 21. Let’s check out Philadelphia’s biggest stories of the day. ‘Why do we just live to die?’: Community comes together to say enough to shootings near Philly schools.

PHILADELPHIA, PA – Hello, Philadelphia!. Today is Tuesday, October 19. Let’s check out Philadelphia’s biggest stories of the day. Philly is one of the most racially segregated cities in America. We measured it.

Philly roundup: West Philly affordable housing complex to be sold, what to do with public monuments & more

PHILADELPHIA, PA – Hello, Philadelphia!. Today is Thursday, October 7. Let’s check out Philadelphia’s biggest stories of the day. Philly’s magnet school admissions are being overhauled – in the name of equity.

PHILADELPHIA, PA – Hello, Philadelphia!. Today is Wednesday, October 6. Let’s check out Philadelphia’s biggest stories of the day. Abortion is a key issue for Pa. Democrats, and it could supercharge the 2022 midterms.

PHILADELPHIA, PA – Hello, Philadelphia!. Today is Tuesday, October 5. Let’s check out Philadelphia’s biggest stories of the day. At the Stephen Decatur School in Parkwood, students develop and hone their leadership skills by participating in the school-wide Leader in Me program, based on the book The 7 Habits of Highly Effective People. The purpose of the program is to equip students with the skills and self-confidence needed to thrive in their local community and classroom.

PHILADELPHIA, PA – Hello, Philadelphia!. Today is Thursday, September 30. Let’s check out Philadelphia’s biggest stories of the day. Most Afghans arriving in America are not strictly refugees, despite how they’re described. And that could be a big problem for them.

PHILADELPHIA, PA – Hello, Philadelphia!. Today is Tuesday, September 28. Let’s check out Philadelphia’s biggest stories of the day. Jalen Hurts has one of his worst performances in Eagles’ 41-21 loss in Dallas (Analysis)

Where to get a frozen or blended drink in Philadelphia

PHILADELPHIA, PA — Frozen drinks have been around for a long time. They got their start during prohibition. They’re famous in Cuba from the frozen daiquiris Ernest Hemmingway had there during his time away from America’s cold winters.

PHILADELPHIA, PA — There are a lot of ghosts in Philadelphia. There’s one on 1216 Spruce Street on the southeast corner of Spruce and Camac; a bigger one on the corner of 2nd and Arch Streets; and another on the sidewalk in front of 2001 Kater Street in Graduate Hospital.

How to learn about LGBTQ history in Philadelphia

PHILADELPHIA, PA — What events or places come to mind when you think of Philadelphia history? Most tour guides, historians, and educators might point to the Battle of Germantown, when Congress members signed the declaration of independence, or the Liberty Bell.

PHILADELPHIA, PA — Dust off your old VHS tapes, they might be worth something to someone. Tomorrow, the Philadelphia Unnamed Film Festival (PUFF) presents their VHS Swap at 2223 Theater from 12pm - 4pm. Visitors will be able to buy, sell, and trade VHSes, DVDs, baseball cards, video games, books, and any other physical ephemera you can find.