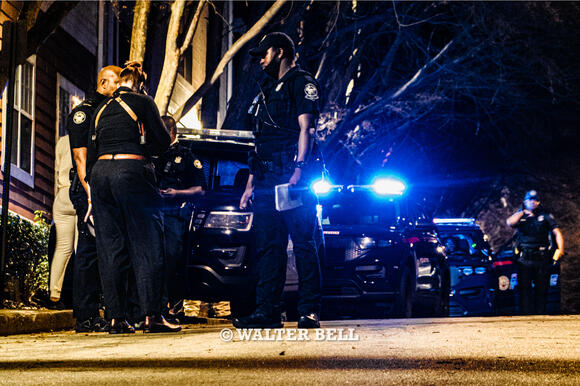 Police investigate a report of a teenage girl shot at a party in a NW Atlanta apartment complex in the English Ave neighborhood says APD.(© Walter Bell. All rights reserved.)

Atlanta (News Focus Atlanta) — Atlanta Police officers were dispatched to a person shot call at 370 Northside Dr NW in the English Avenue Neighborhood of Northwest Atlanta, on Jan. 2, 2022, at around 3:00 AM according to an Atlanta Police Department (APD) press release.

The APD media release went on to state that upon arrival, APD officers located a female victim who appeared to have been shot. Initial examination indicated she had been struck in the hand and ear.

Atlanta Fire Rescue Medics stabilized the victim on scene before she was taken to the hospital in stable condition at time of transport.

The preliminary investigation indicates the victim, a teenage female, and a number of other teenagers, were at the location for a party.

It appears the apartment is a short-term rental. While there, a male discharged a firearm and the victim was struck. Investigators are working to determine the details surrounding the incident.

APD had a section of Western Ave NW next to The Point at Westside apartments, cordoned off with crime scene barricade tape for several hours.

At this time, the investigation continues. No further information was available at that time.

APD reminds readers to please keep in mind the above information is preliminary in nature and is subject to change as the investigation progresses and new information comes to light.

The limited information above is from an official APD News & Press Release issued on 01/02/2022 at 11:01 AM. APD is responsible for the content.

Public safety articles are only to inform the public of incidents.

It is important to note, as guaranteed by the United States and Georgia Constitutions, suspects are innocent until proven guilty, and there have been times when the innocent have been wrongfully arrested and convicted.

Photographs are copyrighted (© 2022 Walter Bell), and downloads, screenshots, and any reuse is prohibited. NewsBreak article share feature is permitted.

Station 41 firefighters, equipment had been at Roswell's Station 6 since November.(City of Milton) NewsFocus™ Atlanta | 03.21.2022 | Milton, Ga. — Milton firefighters returned Monday to an upgraded Fire Station 41, having spent months being hosted by their Roswell colleagues while needed mold remediation work was completed.

Fulton Sheriff Deputy Shooting in Atlanta Investigated by the GBI

Two deadly shootings on Monday investigated by Police; one involving a vehicle crashed into an apartment building.

Person Shot Downtown Inside the Sheraton Hotel According to Police; Additional Shootings Reported Elsewhere in the City

Atlanta, GA (AEC News Focus Atlanta) — New upscale hotel to be connected to the Georgia World Congress Center (GWCC), the No. 1 convention, sports, and entertainment destination in the world.

Friday Coffee with a Cop and Atlanta Fire Rescue in Midtown, 10am - Noon on Dec. 10

Join Midtown neighbors for Coffee with Atlanta Police Zone 5 Officers and Crime Prevention Inspectors who will be available to answer your questions and address community concerns.