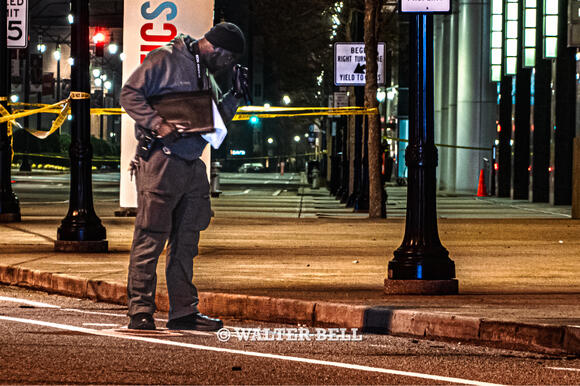 On Sunday, December 26, 2021, the Georgia State University Police Department asked the Georgia Bureau of Investigation to investigate the incident that occurred on 17th Street in Atlantic Station, Atlanta. One teenage male was shot and is in stable condition.

At 10:05 p.m. on Sunday, December 26, 2021, an argument took place between two groups of people and a teenage male near the intersection of 17th and Market Streets in Atlanta. Preliminary information indicates the teen had an argument with a group of people then ran a short distance east on 17th Street. At that time, the teen and people from another group exchanged gunfire.

A Georgia State University Police Department officer who was working an off-duty job on 17th Street saw the incident and responded. The officer shot the teen that fired at the group. The teen was transported to Grady Memorial Hospital.

The officer was not injured and initial information shows no one else was shot during the incident. A handgun was recovered from the scene.

The GBI will conduct an independent investigation. Once completed, it will be turned over to the Fulton County District Attorney’s office for review.

This is the 99th officer involved shooting the GBI has been requested to investigate in 2021.

Incident details above are from an official GBI press release. The GBI is solely responsible for the content.

Public safety posts are only to inform the public of incidents. It is important to note, as guaranteed by the U.S. and Ga. Constitutions, suspects are innocent until proven guilty, and there have been times when innocent people have been wrongly arrested and convicted.

Photographs are copyrighted (© Walter Bell) and any downloads, screenshots, or other reuse is prohibited. News Break share feature is permitted.

Station 41 firefighters, equipment had been at Roswell's Station 6 since November.(City of Milton) NewsFocus™ Atlanta | 03.21.2022 | Milton, Ga. — Milton firefighters returned Monday to an upgraded Fire Station 41, having spent months being hosted by their Roswell colleagues while needed mold remediation work was completed.

Fulton Sheriff Deputy Shooting in Atlanta Investigated by the GBI

Police investigate a report of a teenage girl shot at a party in a NW Atlanta apartment complex in the English Ave neighborhood says APD.(© Walter Bell. All rights reserved.) Atlanta (News Focus Atlanta) — Atlanta Police officers were dispatched to a person shot call at 370 Northside Dr NW in the English Avenue Neighborhood of Northwest Atlanta, on Jan. 2, 2022, at around 3:00 AM according to an Atlanta Police Department (APD) press release.

Two deadly shootings on Monday investigated by Police; one involving a vehicle crashed into an apartment building.

Person Shot Downtown Inside the Sheraton Hotel According to Police; Additional Shootings Reported Elsewhere in the City

Atlanta, GA (AEC News Focus Atlanta) — New upscale hotel to be connected to the Georgia World Congress Center (GWCC), the No. 1 convention, sports, and entertainment destination in the world.

Friday Coffee with a Cop and Atlanta Fire Rescue in Midtown, 10am - Noon on Dec. 10

Join Midtown neighbors for Coffee with Atlanta Police Zone 5 Officers and Crime Prevention Inspectors who will be available to answer your questions and address community concerns.