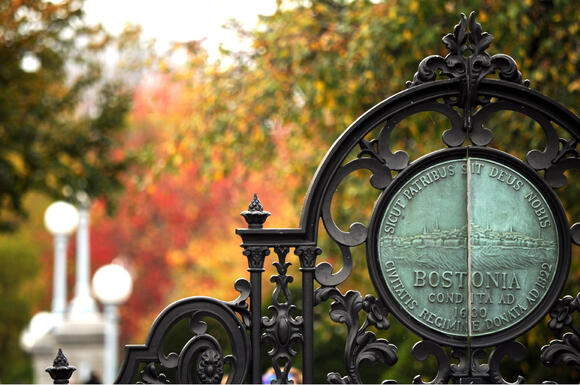 At the gateway to the Boston Public Garden (the public space in Boston).Shutterstock

Last May, I had the opportunity to get to know Boston City for the first time; And whether you want to spend a season in the "New England Capital" or are thinking of definitely moving there, there is information you should know.

These are the 7 facts according to my experience and that you need to know about Boston.

Life in Boston City is cheaper. House rent, public transportation, and restaurant prices are proof of this, in addition to the fact that the average salary is higher. Point for Boston.

If you are not a lover of the cold, stay in Los Angeles. In May, the temperature is enjoyable, but the snowfalls and the cold can freeze anyone in winter. Point for Los Angeles.

If you are of university age or have children who will soon be, although in both cities there are good universities, Boston, apart from having three more universities (13 in total), has some of the most recognized worldwide:

1. Massachusetts Institute of Technology (MIT): considered by numerous rankings as one of the best and most prestigious universities globally. According to the world ranking of QS Universities, it maintains the title of "The Best University Globally for ten consecutive years."

2. Harvard University: Known for its world-class teaching staff and endless opportunities, one of its main strengths is the exceptional diversity of our community.

3. Boston University: Ranked number 26 in the United States, Boston University is a private research university. Seven Nobel laureates have passed through it, including Martin Luther King Jr. and Elie Wiesel, along with 35 Pulitzer Prizes winners and six Academy Prize winners.

If you are a lover of the beach and the mountains, I am sorry to tell you that Boston does not have a mountain system; In addition, although it does have beaches, they are not compared to Los Angeles... Point for Los Angeles.

The City Environment and Security

The Boston City looks cleaner, I noticed fewer homeless on the streets, and personally, I felt safe walking down the street and taking public transport. Point for Boston.

I was fascinated by Boston and its vibrant cultural environment. Above all, it preserves the architecture of its first English immigrants. Churches, buildings are part of its beautiful culture. The City of Los Angeles has a significant number of museums and, at the same time, a multicultural population that gives it a unique touch. Both cities, in different ways, have a lot to contribute at the cultural level.

According to a study conducted by CityHealth, the City of Boston earned the highest rating based on the city's Health policies and its ability to help citizens. Point for Boston.

I admit that I loved Boston. It feels calmer, the people are freanly, and we can get around without stress on the streets. Its historical atmosphere gives it certain magic that makes you think in the past century without neglecting modernity. Now, choosing one of the two cities, I prefer the warmth of the Angels.

On my vacation, I was also in New York City, so I will be commenting on my experience there and comparing it with the City of Stars.

Harmony. The challenge of achieving the feeling of peace and balance that human beings need

Release certain behaviors to achieve emotional balance. Life is complex; There is no doubt about that. However, human beings do not contribute to making it more manageable. We have harmful behaviors that if we start letting go, our coexistence would be much more harmonious.

Information, questions, and answers about the vaccination process for children from 5 to 11 years old

Did you know that nearly 500 children have died since the Covid-19 pandemic began in the US?. It seems a small number compared to the thousands of adults who have died. Still, if we consider that since the pandemic's beginning, the doctors and scientists informed that children were much less prone to complications, that number no longer seems negligible.

Intimate partner violence; A severe problem that continues to grow

Imagen de Diana Cibotari en PixabayPhoto by Diana Cibotari from Pixabay. No, it's ok; I just slipped and hurt my shoulder. - Brenda Arriola, 24-year-old woman.*. Brenda is a young woman who lives in my neighborhood, we met at the supermarket, and I greeted her with a hug since we had a lot of time without seeing us. She complained subtly, and I asked her if something was wrong; she told me the typical answer: She had slipped and injured herself.

The richness and misery of California: the main reasons for this situation and the cities that are at the extreme

Contrast between the metropolis and povertyPhoto by Jon Tyson on Unsplash. The Golden State is known for its diversity. California is one of the most populous states in the United States, one of the largest areas, with incredible climatic, cultural, and racial variety. But it is also the state with the most significant wealth and poverty at the same time.

Analyzing the case of Patricia Alatorre makes one feel sad and helpless. In this case, many factors are involved, but only one heinous ending: the cruel murder of a child whom her family and friends remember as brave and joyous.

"The Squid Game." A series that shows more than cruelty

At this point, few people have not seen the South Koren production “The Squid Game.” A rather crude series that has broken world audience records. With a lot of symbology, an aggressive thematic, not suitable for sensitive people.

The "California Teachers Association" will not allow abuse due to the new "Tik Tok Challenge."

The popular social network TickTick, which went viral at the beginning of the pandemic in 2020, has achieved to capture the attention of everyone, but mainly the youngest. Famous for its challenges, this application has virtualized songs, dances, memes, and everything audiovisual.

"Imposter syndrome." A condition that affects many working women in the United States

This syndrome is related to the inability to perceive success or good work actions; instead, the feeling is of falsehood, as if everything achieved has been by sheer luck and has nothing to do with their ability, intelligence, or a good performance. Those who suffer it feel like a fraud.

BTS come back to Los Angeles City with four concerts

Beauty versus self-confidence in America

self-confidencePhoto from Pixabay - G2f1873E38_1920. Why can you be beautiful and not be able to keep a relationship?. The beauty that attracts rarely matches the beauty that makes you fall in love." -José Ortega y Gasset.

Please don't make me talk about it. I am sorry": Sophie, 32, a resident in Los Angeles City, and with sad eyes, answers in that way my question about if she or someone she knows has had conflicts with gang members.

It is incredible how it is increasingly difficult to get positive news in the media. This is why we want to highlight eight good news that happened at the end of the month. Free Animal Doctor,a nonprofit veterinary clinic, provides much-needed medical services for pet owners. "No one has been denied service for not being able to pay," Leah Walker tells ABC7. They are grateful for the clinic, and like many, they have also been financially affected by the pandemic.

Third dose of vaccine for immunization against Covid-19. Would it really be necessary?

Last Thursday, July 8, the renowned pharmaceutical companies Pfizer and BioNTech announced the development of a new vaccine to strengthen the immune system against Covid-19. If approved, It Would be the third dose to people vaccinated with the vaccine from this laboratory.

8 Simple Tips to Save Money from your Next Month Salary

Did you know that California has 5 of the 10 most expensive cities in the US?. You have surely noticed if you live in San Francisco, San Diego, Los Angeles, Oakland, or San José.