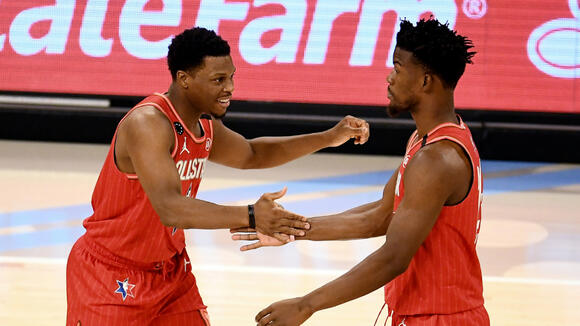 With the NBA draft just happening you already know the crazy free agency moves were going to follow up right after. And that’s exactly what happened at the beginning of this year’s free agency.

One of the biggest moves that happened involved the Toronto Raptors and the Miami Heat.

It was reported and made official that the two teams have agreed to terms of a sign and trade deal that would send Toronto’s veteran point guard Kyle Lowry to the Miami Heat for veteran point guard Goran Dragic, Precious Achiua who will be going into his second year, and a future second-round pick.

Before this deal happened, Kyle Lowry spent the last 9 seasons with the Toronto Raptors and averaged 17.2 points, 7.3 assists, and 5.4 rebounds a game in his last season this past year. Lowry was also a part of the Championship winning team of the Raptors in 2018-19 where he helped bring the team its first-ever championship in team history which was also the first time the team has ever made it to the NBA Finals up to that point and alongside Kawhi Leonard they defeated arguably one of the greatest NBA teams of all time in the Golden State Warriors.

Lowry has now teamed up with some of the best small forwards the NBA has to offer in Demar Derozen to Kawhi Leonard and now to his new teammate Jimmy Butler.

This year is Kyle Lowry is on the third year of his contract is expected to sign a new 3 year deal with Miami that will be upwards of $90 million dollars. With Kyle Lowry being 36 now, he will be hitting 39 by the time this new contract ends.

Personally, me being a die-hard Heat fan I truly didn't really want this to happen and I felt that the Heat could have possibly done better with their selection but it is arguable that Lowry was the best available point guard on the trade/free agency market.

My main issue with this move is that Kyle is, again, 36 years old. Lebron is 36 years old but Lowry is no Lebron and nowhere near physically built like Lebron but Lowry plays a very physical style where he has no problem driving in on the biggest and toughest defenders to get to the free-throw line.

Combining his age and the way he plays there is no possible way he can keep doing this for that much longer. And also not for nothing but Lowry has been known as one of the biggest floppers I've ever laid my eyes on and have witnessed him being such a pest to the Miami Heat for so many years and now he is going to be doing it for the Heat so I'm not truly sure how to take this just yet.

Also quick to note, This past season Lowry only played in 46 of the season's games which was the least amount of games played since he became a starting point guard in his career.

Now if Kyle can play a new role where he doesn't have to handle the ball that much and share the load with Jimmy Butler then this could maybe work. But the moment an injury occurs *God forbid* then the Heat are going to be in serious trouble.

While losing Goran Dragic in this trade the Miami Heat also lost their young up and comer Kendrick Nunn to free agency, who signed with the Los Angeles Lakers after Miami decided not to re-sign him. With that, now the Heat is pretty short-handed at the guard spot.

Regardless, for the sake of my team im hoping for the best but not expecting the best, unfortunately.

Let me know your guy's thoughts on the addition of Lowry and if you guys are either happy with the move or think the Heat could have made different moves like I think they should have & let me know how far you think this new faced Miami Heat team makes it this season.

As always, Hope you enjoyed the read!