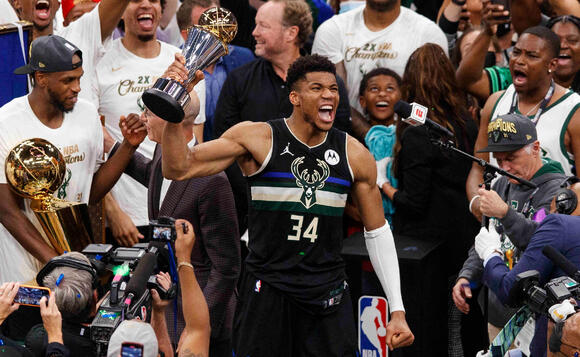 Coming into this game the Bucks had the 3 to 2 series lead winning the last 3 games in a row to get to this point where they needed just one last win to get the championship.

Going into the game though the first quarter begins and Giannis makes the first bucket of the game which was just the beginning of a big night for him.

For the first 3 minutes of the game though both teams struggled to score and by the 9 minute mark on the clock both teams only scored one bucket each.

The second quarter starts and the Suns come out storming and went on a 10 to 0 run in the first 3 and a half minutes where the Bucks didn't score at all and then once again went on another run of 13 points to the Bucks 5 for the next 5 minutes and even took the lead right under the 5 minute mark on the clock itself and from that point to the end of that first half the Suns went on an 16 to 9 point run and ended the quarter in the lead by 5 points with the score of 47 to 42.

So After the Bucks came out strong in the first quarter and the Suns came out discombobulated it was the exact same thing but opposite here with the teams and the Bucks only scored 13 points this whole quarter.

The second half begins and this is where both teams really picked it up and in the first 3 minutes of that quarter both teams scored 8 points each but in the following minute and a half the Bucks went on a very quick 7 to 0 run which got them the lead back and at the 7 and a half minute mark on the clock the score was 58 to 55.

Then for the rest of that quarter both teams started going back and forth again but the Suns ended the quarter stronger and from that 7 and a half minute mark to the end of the quarter the Suns scored 22 to the Bucks 17 and with that quick slight run the Suns were able to tie the game back up heading into the fourth quarter with the score of 77 each.

Going into the fourth quarter the game was already intense with the tie but these last 12 minutes said a lot of things about this Bucks team. Regardless the quarter starts and both teams score a quick 2 buckets each in the first 2 minutes.

And then for those last 3 minutes the Suns could stayed neck and neck with the scoring but that did nothing to help the comeback for them and they only scored 6 to the bucks 8 in those last few minutes and the game comes to an end with the Milwaukee Bucks officially being the 2021 NBA Champions and did it in front of their home crowd. The end score of the game was 105 to 98.

Amazing post season for this team, Even though im still a little salty the Bucks demolished my Miami Head and swept them in the first round im happy that the team that did that was the ones who ended up winning.

OFCOURSE me being a big CP3 fan I am very sad for him as this was the first time he was ever able to make it to the NBA Finals but came up short.

But its nothing for them to hang their heads on as they did great in the playoffs but the better team won and thats just how it goes.

The leading scorers for this game though was Giannis for the Bucks ofcourse who scored a huge 50 points and had 14 rebounds,

the most surprising thing to me about that 50 points is that 17 of those points came from making 17 out of 19 free throws and as we’ve seen all post season thats where he struggled but he got it together right at the perfect time. For the Suns the leading scorer was Chris Paul with 26 points who did everything he could but ultimately wasnt enough.

Crazy thing is there was no other 20 point scorers on either team. That really played a factor for the Suns demise here but thats whatever now.

Giannis ofcourse got the Finals MVP which was well deserved but one person i have to give alot of praise for is Krispy Mids aka Kris Middleton who has showed up time and time again hitting the very big shots for the Bucks especially everytime the Suns would get something going,

it was Middleton who threw water on their fire with a clutch shot. But regardless Giannis gets the Finals MVP.

Again, great season for them, and cant wait to see what the future holds. Its also pretty cool to see Giannis get this championship after signing the huge extension with the Bucks this season showing his loyalty and bringing the city a championship in the same season.

Congrats to the Bucks and Giannis.

The NBA Season is officially over but the Olympics is only a few days away so ill still be reporting on sports and combat sports. And NFL is also right around the corner so stay tuned for that as well.