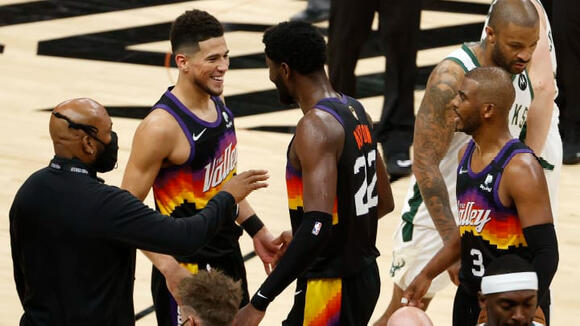 Going into this game the Suns had the 1-0 lead in the series.

The game gets going and in the first 2 and a half minutes of the game we saw the Milwaukee Bucks come out really fast and go on an 8 to 3 run that was led by Jrue Holiday and Giannis who both scored 4 points apiece.

Then between that time all the way to about the 4-minute mark on the clock we saw both teams score back-to-back buckets and the Bucks scored 15 points in those last 6 minutes and the Suns kept up scoring 14 themself.

Then for the next 3 minutes, things slowed down a little and both teams then scored a combined 4 points with a 3 pointer from Cam Johnson and a free throw by Giannis.

For the last minute and a half of that quarter, we saw the Suns make 2 three-point shots in a row, one from Devin Booker and the other by Torey Craig and we also saw the Bucks score a quick 5 points in that last minute as well and the first quarter ended with the Bucks in the lead 29 to 26.

The second quarter begins and this is where we saw the Bucks start to get a little discombobulated.

In the first 30 seconds into the quarter, the Suns scored the first bucket to get things going.

So in 5 minutes of the first part of the quarter the Bucks were only able to score 6 points and then for the next following two minutes only score another 3 points. Horrible!

Although on the Sun's end it also took them 2 full minutes to get their next bucket after that 10 to 3 run.

For the last 5 minutes of that quarter, it didn't get any better for the Bucks and the Suns ended that first half on a 18 to 7 run going into halftime with an 11 point lead with a score of 56 to 45.

Second half of the game gets going and the Bucks are back to normal and they score 17 points in the first 5 and a half minutes of that third quarter and the crazy thing is Giannis scored 14 of them himself.

The suns also had 12 points themself in that quarter up to this point and then for the last 6 and a half minutes of that quarter both teams stayed neck and neck where the bucks scored 17 points and the Suns scored 18 to end that 3rd quarter and the Suns had the 10 point lead with the score of 88 to 78.

Going into this last quarter Giannis already had 32 points and both him and the Bucks knew they needed to pull something off and quick in order to get the game close again and went on a 10 to 5 run for the first 3 and a half minutes and brought the Suns lead down to just 5 points.

But it was just about every time that the Bucks would get something going, Devin Booker had something to say and answered back with a 3 pointer every time and Devin made 3 of them in the first half of the 4th quarter with 2 of them coming back to back right after the Bucks 10 to 5 run to start the quarter and at around the 7-minute mark on the clock, the Suns took back an 11 point lead.

For the next 3 minutes though the Bucks once again started putting shots together and went on a quick 7 to 2 run and brought the Suns lead down to 6 around the 4-minute mark on the clock.

But after a quick timeout by the Suns, they came back out and got right back to their consistent scoring and kept just outscored the Bucks for that last 4 minutes 15 to 11 to keep the lead comfortably to end out the game and the Suns end up taking Game 2 in front of their home crowd with a 10 point win with the score of 118 to 108.

The leading scorer for each team was Devin Booker for the Suns with 31 points and for the Bucks obviously, it was Giannis with 42 points and also had 12 rebounds.

Kris Middleton had a really bad outing and scored only 11 points after being the most consistent player for the bucks up to this point.

Chris Paul is also keeping his scoring up and he had 23 to his name and the surprising stat of the game was Mikal Bridges for the Suns scoring 27 points and Jae Crowder even had a silent 11 points 10 rebound double double.

So it was a very complete team victory for the Suns and a very disgruntled team collapse by the Bucks but mainly just in that 2nd quarter.

Regardless, Game 3 takes place Sunday, July 11th, and will be in Milwaukee where the Bucks will need to do everything they can to not go down 0-3 in this series.

Hope you guys get to watch it as it should be very intense.

hope you guys enjoyed the Read.