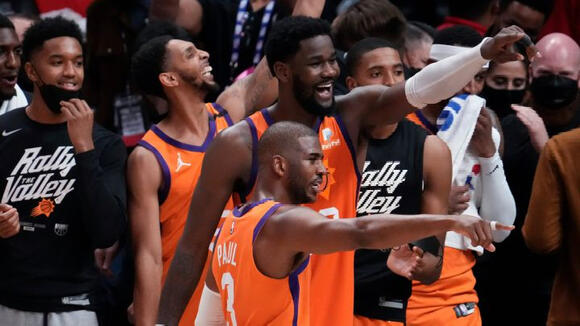 We knew going into this game the Clippers were set to face elimination being down 3-2 in the series.

We saw the Clippers manage to secure a win in game 5 to avoid being sent home and with this game 6 being infront of the Los Angeles home crowd would they be able to avoid elimination again?

One coming from a CP3 assist to Mikal Bridges and one by Patick Beverly for the clippers.

But besides that first shot it took the Clippers almost 3 MINUTES after that first shot, to get their next one and the Suns went on a quick 7-2 run right in the beginning.

After that quick initial run by the Suns the Clippers came surging back and went on an 16-9 point run for the following 6 minutes and then in the last minute and a half of the quarter both teams scored a combined 17 points where they literally just went bucket for bucket till the horn sounded and Boogie Cousins even hit a buzzer beating 3 point shot with a second on the clock.

Very intense beginning of a must win game for the Clippers and the quarter ends 33 - 29 with Los Angeles down by 4.

The Second quarter starts and the Suns set the tone with another quick run this time being a 12 to 6 point run from the beginning of the quarter to the 9 minute mark on the clock.

But in typical Clippers fashion they come right back with a run of their own and go on a 15 to 5 run for the next 4 minutes of the quarter where they took advantage of the numerous misses by the Suns there.

Then once again, very similar to how the game has been going so far we then saw the Suns get it together and end the quarter with a 15 to 7 point run in those last 5 minutes of that first half and the teams go into halftime with the score of 66 to 57 with the Suns in the lead by 9.

Second half of the game is underway and in the first 5 minutes of the quarter both teams stay somewhat even in scoring and the clippers scored 10 points and the suns scored 12.

But for the following next 3 minutes between the 7 minute mark to the 4 minute mark of the clock the Suns once again put their foot right back on the gas and went on an 11 to 4 point run led by Devin Booker.

Then unsurprisingly, we saw the Clippers go on a very quick 10 - 0 run until about a minute and a half remained in the quarter and then we saw what was about to be the beginning of what was to come and Chris Paul said Nahh B! And scored a quick 8 points just himself to end the third quarter and going into the fourth quarter had 22 points.

In the first minute of that last quarter we saw the big man of both teams in Deandre Ayton and Demarcus Cousins score the first buckets for each team but only to see Chris Paul start that quarter exactly how he ended the 3rd quarter which was red hot and score 6 straight points himself for the next 2 minutes.

Then right after that we saw the Clippers once again go on a very quick 7-2 point run in one minute but only to see that quick flame get blown out by Chris Paul once again who made a 3 point shot and got fouled on it by Reggie Jackson which CP3 got a 4-point play out of it.

From the moment of that 4 point play and on the Suns went on a 12-0 run that was led by Chris scoring 10 of those points just himself!

After a made 3 point shot by CP3 we saw a quick altercation where he must have said something to Patrick beveryly after the shot and at a time out when both teams were walking to their benches Beverly took exception to what Chris said and shoved Chris to the ground while his back was turned and Beverly got ejected for his actions after.

With under 2 and a half minutes of the game left, we saw CP3 make one last 3 point shot to give himself a whopping 41 total points before he and the rest of the starters were taken out on both sides and the bench players closed out the game.

The end score was 130 to 103 with the Suns taking the game and series win sending the Clippers home and sending the Suns to their first Finals appearance since 1993.

But to me the most important detail is that this will be Chris Pauls first ever time in the finals in his great 16 year career.

If you havent seen, I made a full video and article recapping Chris Pauls COMPLETE Playoff Career up to now. Hope you guys can give it a quick view or read.

Amazing playoff run so far by CP3 and the Suns, but it is not over yet as they are now set to face the Milwaukee Bucks in the Finals.