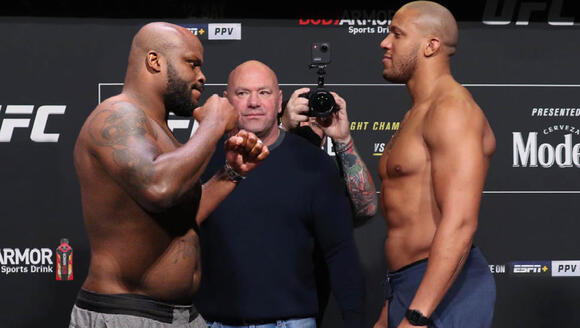 It was just this past Saturday that we watched the 5 round Heavyweight main event between Ciryl Gane and Alexander Volkov take place on UFC Fight Night. Cyril Gane came out victorious with a decision win.

Yesterday I posted the recap video on the fight and at the end of the video I mentioned what I would like to see happen next for both fighters.

When I talked about Gane I said I would like for him to fight Derrick Lewis next, but only IF the negotiations are still ongoing between Lewis’s side and reigning champion Francis Ngannou’s side.

Derrick is coming off of his devastating 2nd round knockout of my boy Curtis Blaydes, which still breaks my heart.

But, I said in the video that if Derrick doesn't want to wait and wants to stay busy he should take a fight against Gane for a #1 contender spot for the heavyweight title.

Not even an hour after I posted the video saying this, the report came out that Derrick Lewis will actually be taking on Ciryl Gane in the co-main event of UFC 265 that's taking place on August 7th.

The event is set to be headlined with a Woman's Bantamweight Title fight between the champion Amanda Nunes & challenger Juliana Pena.

The fact that Lewis and Gane is fighting is not a shock to me at all.

What was shocking here to me at first is that this fight between the two is contracted for the Interim Heavyweight title.

Clearly, negotiations between the UFC and Francis Ngannou’s team went sour and didn't pan out, But Francis only just won the Heavyweight title about 3 months ago when he knocked out former champ Stipe Miocic on UFC 260 back in March.

Three months is 100% too soon for all that. But the more and more I thought about it I realize that this is nothing new to the UFC. They have done this plenty of times in the past with these interim title fights.

If you haven't learned by now, the UFC is a company that is 100% about its money. They will do whatever they can to get as many viewers and buyers for each event as possible.

They could have easily just put these two on UFC 265 without any label on it even though the winner would be the clear-cut number 1 contender to fight Francis. But what they did was make this an interim title fight to spice up the fight a little more for the viewers and to attempt to get more buyers.

A lot of the MMA community is saying the UFC crapped all over Francis and honestly, maybe they did when it came to the contract negotiations as we all know how it is with UFC and their fighter pay but the company isn't stripping him of the title. They are just keeping him on the side to see who wins this fight and then contract negotiations will once again start for him to fight the winner more than likely by December im guessing.

Now if the fight happens between Gane and Lewis and the UFC and Francis can not get a deal done THEN I could 100% see the UFC stripping Francis after, not that I would agree with it but knowing the UFC and seeing how they work from the outside at least I wouldn't be surprised one bit.

Derrick Lewis will be coming into UFC 265 with a record of 25 - 7, 20 of those wins coming by knockout as he is known as the knockout king in the UFC with the companies most knockouts. Cyril Gane will be coming in with an unbeaten record of 9 - 0. Again it will be the co-main event for UFC 265 with the headline being Amanda Nunes vs Juliana Pena for the women's bantamweight title.