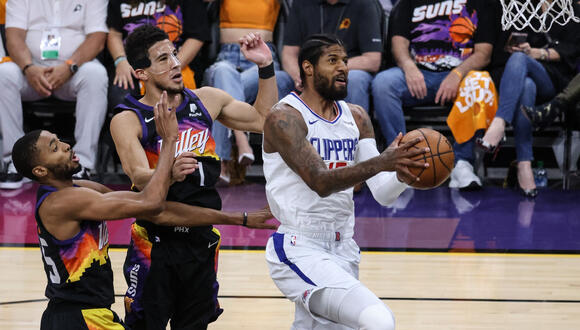 After the Suns took home the very low-scoring win in game 4 in front of the Los Angeles crowd we saw game 5 go back to Phoenix where the Suns were coming into the game with a 3-1 lead only needing this last win at home to send the Clippers packing.

But just like ALL playoffs, EVERY TIME you count the clippers out and say the series is over for them, they just keep coming back!

Going into the first quarter we saw the Los Angeles Clippers come out on a mission and it showed as they went on a 14 to 3 run right in the first 3 minutes of the game and by the halfway mark of the quarter the game the Clippers were up 20 to 7.

In the next 3 minutes we saw the Suns start to come back and went on a 14 to 5 run but for the last 2 minutes of the quarter got outscored by the Clippers 11 to 5 and the quarter ended with the score of 26 to 36 with the Clippers up by 10.

Second quarter starts and both teams score 4 points each almost right away but then the Clippers started turning the ball over and missing shots which led to the Suns starting to make their way back little by little, and between the 10-minute mark and the 7-minute mark on the clock the Clippers didn't score one point, but for the last 6 minutes of that quarter, the Clippers outscored the Suns 14 to 10. Although the Suns still outscored the Clippers in the full quarter 26 to 23 to cut the Clippers lead down to just 7 points going into halftime.

The 3rd quarter begins and for about the first 4 minutes of the quarter, it looked as if the Suns shook off whatever was wrong in the first half and started storming back and went on a 10 to 2 run and brought the Clippers lead all the way down to 1 point.

There was also a moment where CP3 tried to have a screen set to get a 3 point shot off but Patrick Beverly ran around it and ended up taking CP3’s feet from under him and CP3 hit the floor pretty hard and it was called a flagrant foul but luckily CP3 was okay after from what it looked like.

But as the Suns came that close to take over and take the lead, Pandemic P apparently went into halftime and changed into playoff P and for the second part of that quarter the Clippers went on a 30-16 point run that was led by Paul George who scored 20 points in just that quarter alone and the score going into the 4th quarter was 91 to 78 with the Clippers in control.

In the 4th quarter, the Suns did everything they possibly could to try and bring the game back for a chance to win and even went on a 13 to 5 run to open the quarter first 3 and a half minutes only to score just 3 points in the following 3 minutes after where the Clippers made 12 points and took the lead back by 10 all over again.

Then for the last 3 minutes of the game itself, you saw the Suns start to cave in and they only made just 2 points for all of those last 3 minutes. And you could really tell they were done early cause they took out all the starters with a minute left.

The game ends and the Clippers take the game 5 victory as the away team and avoids elimination once again in this postseason sending the series to game 6 which takes place Wednesday, June 30th.

Leading scorers were Paul George who showed up as playoff P who dropped 41 points for the Clippers and Devin Booker for the Suns who scored 31.