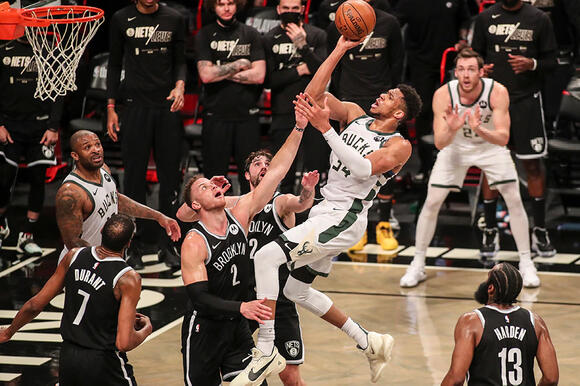 What a freakin week it was for NBA Playoff basketball.

We had both of the Eastern Conference semi-final matchups go to game 7 and both matchups were an instant classic. But this article will be about the first of those 2 games which were of course the Brooklyn Nets vs the Milwaukee Bucks.

Going into this game i honestly thought the Nets would pull it off with the team on Durants back and get the win especially with the game being taken place in Brooklyn but the Milwaukee Bucks had other plans in mind here.

At that point Kevin Durant had 20 points and Giannis had 15 points.

Third quarter starts and the Brooklyn Nets literally cant get anything going at the beginning meanwhile the Bucks on the other end scored 5 out of 7 of their first shots.

The Nets ended with 28 points in that 3rd quarter which isnt bad but the main issue there is that Kevin Durant scored 13 of those 18 points himself and the team got outscored by the bucks by 7 and went into the fourth quarter being down by just 1 point now.

The fourth quarter we started seeing both teams slow it down in the beginning scoring 27 total points in the first 7 minutes of the quarter and then everything started to pick up and get super intense where both teams where going bucket for bucket. 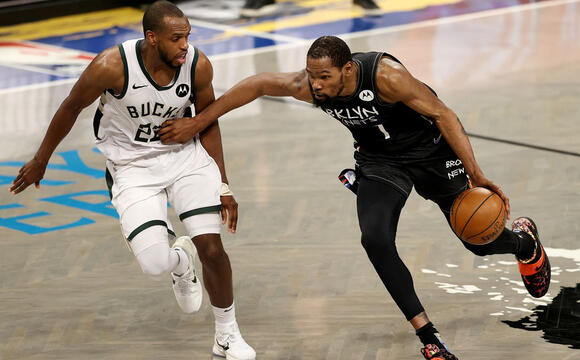 In the last minute of the 4th quarter we saw James Harden get a very idiotic foul on Kris Middleton which sent Middleton to the line to shoot 2 free throws. At that point the Bucks were up 107 to 105 and Middleton hit both shots to give the Bucks 2 more points to put them up 109 to 105.

Then once the Nets got the ball back Durant took a shot which he missed but the ball went out of bounds where the Bucks touched it last so the Nets had another shot where Kevin Durant then made his next attempt. Score was then 109-107 for the Bucks.

Then in an unthinkable turn of events we saw the Bucks give up a shot clock violation turnover where there was just 2 seconds left on the clock and when the ball was inbounded to Brook Lopez it seemed like he had no clue about the time left and committed the turn over and gave the ball back to the Nets for a chance to either take the win, or tie it up.

Thats when Kevin Durant hit one of the most clutch shots in playoff history where the ball was inbounded by Jeff Green to KD from the top of the key KD took an incredible turnaround shot with PJ Tucker defending him like a dog right in his face and Durant made the shot leaving 1 second left on the clock.

Only issue is that Kevin Durant got some of the longest feet in the world and instead of the shot being a 3-pointer like he would have wanted, it ended up being just a 2-pointer which only tied the game to send it into over time.

Although the poster of the video has an error in the title as the shot was, again, just a two-pointer **Video Below **

As epic the whole game was leading upto this point, pretty much nothing happened in overtime besides the Nets completely fall apart and was only able to make just one bucket in the extra time and that was literally in the first 20 seconds of the over time.

Yep you heard that right. Only 2 points scored by the nets and it wasnt even by Kevin Durant. Although KD did have a chance to hit a big 3 point shot at the end but missed badly and airballed it but again the shot would have only been a 2 pointer as his foot once again was on the line. But this time it didnt matter because as i said, he missed and the Bucks scored not much more and only had 6 points in the overtime but thats all they needed and they took the win by 4 points and the series 4-3 moving onto the eastern conference finals.

With all that said though. As much as i am not a KD fan, huge props to him for doing what he could with this ridiculously coached Nets team, and Congrats to the Bucks along with the Milwaukee fanbase for going to the eastern conference finals.

Hope you enjoyed the read