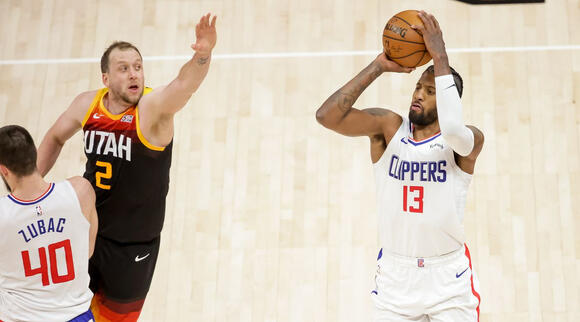 The moment news broke that Los Angeles Clippers star forward and team captain Kawhi Leonard had been ruled out for game 5 against the Utah Jazz, The majority of the sports world, Including myself, wrote the Clippers off and figured their season was going to come to an end in the next two games that were to follow suit. Although there was one person who had other plans. That person was Los Angeles Clippers second-best player on the team, Paul George.

Many times we have seen and or labeled Paul George as inconsistent or just not a big-name player who can handle the big stage and show up for big games in multiple instances. It came to the point where he was even named "Pandemic P" when he failed to have big showings in last year's first-ever NBA Bubble Playoffs where the Clippers did make the Conference Finals but ultimately got eliminated by the Denver Nuggets. Paul George would average just 21 points in that series which would not be enough against the all-around team of the Denver Nuggets.

Going into this season we always knew the Los Angeles Clippers were a stud of a team and would make the Playoff yet again, but we had no idea how they would perform when getting there.

Ending as the conference's number 4 seed, The Clippers had a very rocky start where they would go down 0-2 against the Dallas Mavericks but they were able to rally back and end up winning the series in game 7. Ironically they had the exact same start in the next round which is the current round and went down 0-2 against the red hot Utah Jazz. But once again the resiliency of the Clippers showed and they were able to win the next two games to tie up the series.

Although after game 4 it was then announced Los Angeles Clippers star forward Kawhi Leonard was going to be out for the next game and possibly even longer due to suffering a right knee sprain in the 4th quarter of that game 4 match up.

It was now up to Paul Goerge to do something he hasn't done since his days as the number one option during his days on the Indiana Pacers, which was lead the team. And that he did.

With Kawhi out of the game, Paul George put the team on his back and had a monster outing getting a big double-double by making 54% of his shots scoring 37 points on 12 of 22 attempts, with 10 out of 11 made free throws. 16 rebounds, along with 5 assists, 1 steal, and 2 blocks to add to his clutch performance.

The Los Angeles Clippers had an amazing defensive team effort when it came to slowing down Utah Jazz star guard Donovan Mitchell. Mitchell came into this game averaging over 35 points a game in the last 5 games he played but only ended with 21 points making only 31% of his shots. Los Angeles Clippers point guard played a big part in that defense.

The Clippers ended up winning this game 119 to 111 in front of the Utah home crowd while being a very big underdog and now take the series lead of 3-2.

Game 6 takes place in Los Angeles in the Staples Center Friday, June 18th where the Utah Jazz will be looking to bring this series to game 7.

Can Paul George have another amazing showing and performance? Or will Donovan Mitchell come back down to earth and have another big game we have come to see from him?

We can only wait to find out.