After 11 long years of missing the Playoffs in general, The Phoenix Suns are now in the Western Conference Finals 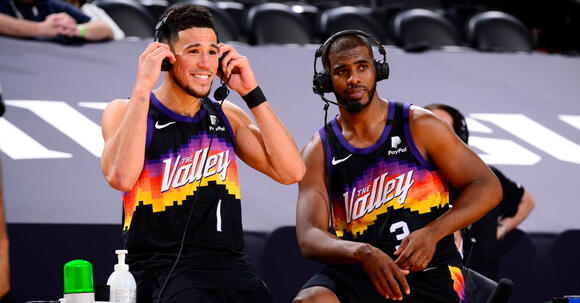 Unless you are a die-hard Phoenix Suns fan, I'm pretty sure no one outside of that bubble predicted this to happen but the team is now headed to the western conference finals!

The last time that we witnessed the Suns in the playoffs, in general, was over 10 years ago in the 2009-10 season where they coincidentally also made it to the western conference finals. They ultimately lost to the eventual champions, Los Angeles Lakers that included the late and great Kobe Bryant.

Coming into this season there were many questions that needed to be answered about the team. The main one being how the newly acquired future hall of fame point guard Chris Paul would play into the team's success and or downfall.

The 36-year-old veteran came into the new season fresh off what was looked at as a mediocre season with the Oklahoma City Thunder in the previous year. He played in 70 of the season's games but the two seasons before that where he was on the Houston Rockets we saw CP3 miss a total of 48 games between those 2 seasons on Houston so it was always going to be a factor when talking about his health going forward.

Fast forward to now and Chris has played and started in 70 of the season's 72 total games missing only two all year. Not only that, this season Chris is shooting at a .499% with his field goals which is the second-highest season average of his career with the first being in 2008-09 when he was on the then known as "New Orleans Hornets" with the shooting average of .503%. Paul has been doing one of the greatest jobs in using his veteranship with mentoring these young players. Especially Devin Booker.

Since being drafted in 2015 with the 13th pick by the Suns, Devin Booker has been nothing short of extraordinary. He started in 51 of the 76 games that he played in his rookie year and averaged just 13 points with the 27 minutes per game that was given.

In his second year, he went from that 13 points per game average all the way to 22 points per game and started in all of the 78 games that he played. It was clear as day that the Suns had a very special player on their hands and if there was any doubt, it was quickly evaporated the night of March 24th of that year.

Between the 2017 season to now, it was evident that Devin Booker was a superstar averaging 25 points throughout these mentioned seasons and even made the all-star team this year and the last year. Last season Booker was just only one win shy of leading his team into the first-ever NBA Bubble Playoffs.

This season we went on to see Devin Booker lead this Suns team to a first-round series victory against the defending champions and Lebron-led Los Angeles Lakers. This was the first time in Lebron's illustrious career that he has been knocked out of the playoffs in round 1.

Then we went on to see Devin Booker and Chris Paul lead the team to a second-round SWEEP of the Denver Nuggets who was led by the newly crowned season MVP, Nikola Jokic. Although the last game there was some controversy where many, including myself, thought Nikola was unrightfully ejected from the game. But that is a story for another day.

Regardless, Now two of some of the most favored teams to make it to the finals were eliminated.

All at the hands of Devin Booker, Chris Paul & of course the very key role players such as Jae Crowder, Deandre Ayton, and more so the shooting duo of Mikal Bridges and Cameron Payne who have been shooting lights out.

Now the Suns are just waiting to see who they will be eventually matched up with in the conference finals as the Utah Jazz and Los Angeles Clippers are still battling it out. As of this writing, the Utah Jazz leads that series 2-1.

Personally, I would love to see the matchup of Booker vs Mitchell in the conference finals but will we get that?

Only one way to find out and that is to keep watching the already super entertaining NBA Playoffs.

But let's hope it happens.

Hope you enjoyed the read