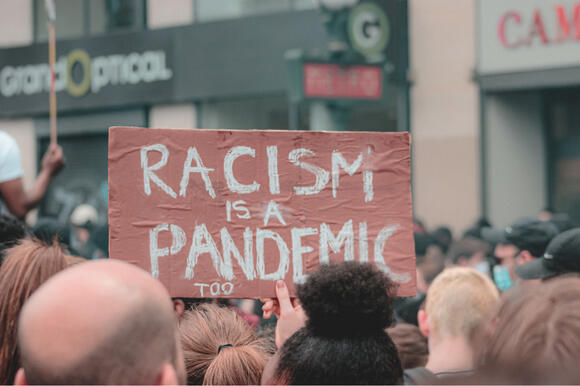 A woman holds a sign in a crowd.Photo by Mathias P.R. Reding from Pexels

Racism has been declared a public health emergency by Chicago Mayor Lori Lightfoot. On Thursday, Mayor Lightfoot linked systemic racism to the 9.2-year difference in life expectancy between Black and non-Black residents in Chicago.

Data released earlier in the week from the Chicago Department of Public Health (CDPH) showed that Black residents have an average life expectancy of 71.4 years, while non-Black residents average 80.6 years.

There were five key factors listed that play a major role in the gap, including chronic disease, health concerns, homicide, infant mortality and opioid overdose. Health concerns included a variety of diseases, such as coronavirus, flu and HIV.

In response to this, Lightfoot announced that new initiatives and collaborations addressing racism will be put into place involving city officials and community leaders.

This includes developing a way to discuss and address how historical policies — such as Jim Crow restrictions and redlining — have have an impact on the Black community.

“At almost every single point in our city's history, racism has taken a devastating toll on the health and well-being of our residents of color – especially those who are Black," Lightfoot said. "Without formally acknowledging this detrimental impact, we will never be able to move forward as a city and fully provide our communities with the resources they need to live happy and healthy lives.”

The CDPH also made an announcement that it will be allocating $10 million to develop six Healthy Chicago Equity Zones. The funds used for this project will come from the city’s COVID-19 relief funds that were distributed by the Centers for Disease Control and Prevention (CDC).

"The launch of the Healthy Chicago Equity Zones is an extension of the racial and health equity work implemented by community leaders, public health entities, city government, and health institutions," said Ayesha Jaco, executive director of one of the participating organizations, West Side United.

These zones will be led by regional and community organizations and focus on increasing the number of vaccincated residents in Chicago neighborhoods that have been most impacted by the COVID-19 pandemic.