5 People You'll Find in Almost Every Yoga Class -- Which One Are You? 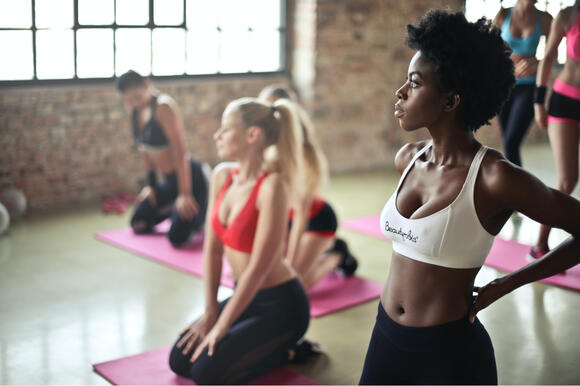 (Photo by Andrea Piacquadio from Pexels)

This last year threw us all for a loop. Now that gyms, studios and other exercise facilities across the country are slowly beginning to reopen, more people are showing up to yoga classes again.

From the corporate employee to the stay-at-home mom, each yoga class has a different mix of personalities. Even so, there are a few yoga characters you’ll see often during your yoga classes. You might not see all of the five people listed below each and every class, but there’s a very, very good chance you’ll encounter at least one or two each session.

1. The extremely flexible one

We’ve all seen them before. The ones who gracefully move from one pose to the next seemingly without any effort. Simply touching their toes isn’t enough. They’re the ones who put their entire palms under their feet and their elbows are still bent. We all want to be this person. Few of us actually are.

How to spot this person: Every movement they make is graceful, and they can get into any pose. Every. Single. Time.

(Photo by Elly Fairytale from Pexels)

2. The current or former athlete

You can tell this person is athletic. Maybe they’re flexible, and then again, maybe they’re not. But they’ve definitely got this movement thing down pat. It’s possible they’ve never done yoga before, but because they’re already limber, they’ve got a leg up on the total beginners.

How to spot this person: They might not be the most flexible, but they’re confident and physically nimble in their movements.

3. The one who doesn’t want to be there

There’s always at least one person in a yoga class who wishes she (or he) was somewhere else. Why are they there, then? For the sweat, of course. They know the exercise is good for them, and they’ve heard that there are mental benefits as well. But the truth is, even with all the touted benefits, they would probably prefer to be doing just about anything else.

How to spot this person: They’re looking at the clock every few minutes and sighing (loudly) when they realize they're only five minutes into their 90-minute class.

Do you remember your first yoga class? It was probably a little intimidating, and you thought you were doing everything wrong. What’s a downward facing dog?! The first-timer is very self conscious and tries extremely hard to fit in. This person is also very aware that she (or he) is inept, clumsy, awkward and not even close to being as lithe as everyone else.

How to spot this person: No matter what pose is called, they’re looking around to see what everyone else is doing to make sure they haven’t made a huge error.

(Photo by cottonbro from Pexels)

The know it all tries to predict what the teacher is going to say before it’s said. This individual also takes it upon herself (or himself) to move into the hardest variation of the pose, even when the instructor hasn’t offered that variation. Sometimes it’s ok, and sometimes the know it all inadvertently disrupts the teacher’s intended flow.

How to spot this person: They try to guess the next pose and move into it before the instructor calls it, and then they go on to find the most difficult variation.

Throughout your yoga journey, you’ll probably transition from one of these people to another. You might even go through cycles of one, two, three or all of them from time to time. Just remember, each yoga practice is an opportunity to become a little more in tune with yourself.