Crazy finish in Moto3 at Losail, with Andrea Migno getting the better of Sergio García in a race that was marked by the drama of Ayumu Sasaki.

The Moto3 race, the first of the year, was immediately marked by the penalty of pole position owner Dennis Foggia, as well as Tatsuki Suzuki and Izan Guevara, all starting from behind the grid.

A great start to Ayumu Sasaki, with Andrea Migno and Jaume Masia in pursuit. Ivan Ortolá was fourth and Sergio García was fifth.

The yellow flag soon after was raised as a result of the crash of Carlos Tatay, who had risen to fifth. García will have touched the rider who left the track in disbelief. It was certainly not the start the CFMotor Racing PruestelGP rider would have wanted.

However, the trio of penalized riders received the warning to fulfil with the Long Lap Penalty.

Highlight for Diogo Moreira, rookie in the category, who started in 18th place and was already in seventh place.

After three laps, Sasaki was leading with 1.006s over Migno, Deniz Oncu was now third, with Masiá and García in fourth and fifth respectively.

García was, however, warned that he would have to serve a Long Lap Penalty due to irresponsible riding, and then another crash, at turn 16, with Lorenzo Fellon and Suzuki. 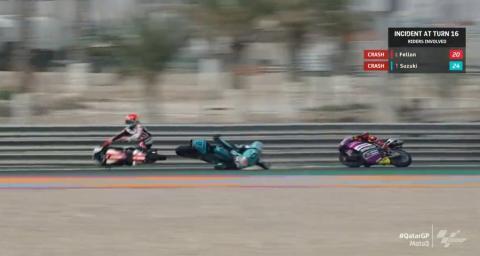 The crashes were repeated in Losail, now with Scott Ogden also going to the ground.

Up front, Sasaki was unstoppable and was now leading with 2.6s over Migno. So was the top 10 of the race with eight laps completed:

If at the front everything was going well for Sasaki, Migno kept second place and Masiá third, but behind the fight was intense with Kaito Toba, John McPhee, García constantly changing positions, with Moreira also in the fight.

With nine laps to go, Masiá was out of the race after crashing at turn 12, now with Toba also involved, touching the rider and causing him to lose control of the bike. The incident would be analyzed by the Race Direction. 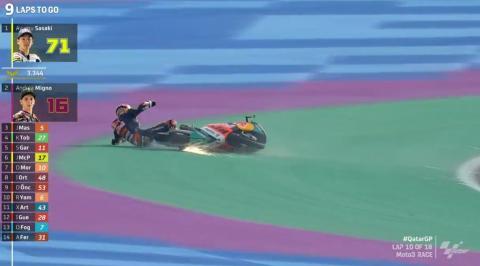 And out of nowhere, drama! Sasaki, who was more than three seconds ahead, avoided a highside crash but was left with a damaged bike. The fairing on the left side was compromised, with this one losing all the advantage it had and being overtaken shortly afterwards. Migno was the new leader of the race, and Oncu second, with Toba in third.

García reentered the fight and moved up to second with six laps to go, at a time when Sasaki was already 12th.

The battle for second place was intense: García and Oncu were constantly swapping places and Sasaki was now out of the race, bringing the number of riders who would not finish the Qatar GP to seven.

With three laps to go, this was the top six, with Moreira in sixth:

All open for the end of the race, with Migno leading with just 0.055s over Oncu, second. Intense exchange between potential candidates for victory.

One lap to go: Migno up front, 0.044s off García, Toba in third, Oncu fourth and John McPhee fifth.

Intense race finish in Losail, with Migno entering the home straight practically side by side with García but managing to hold on to the victory. 0.037s separate the riders and Migno is the first Moto3 winner of the year.

How many millions does Suzuki save with the exit in MotoGP?

Suzuki's exit at the end of the current MotoGP season is one of the news stories of the year. The Japanese manufacturer had signed a contract in November 2021 that allowed the GSX-RR to continue racing in the world championship until the end of 2026, but with the exit at the end of this year there is a hefty sum that Suzuki avoid spending over the next four seasons.

Fabio Quartararo doesn't even 'get angry' with problems overtaking and warns: 'My position was much further back'

After talking about some problems he has with his bike to overtake, something that was clear again at Le Mans, Fabio Quartararo went further and even confessed that the phase of getting 'angry' is now a thing of the past. Although he was happy with the result and speed, he warned that his real position isn't the one he ended at.

'Without the crashes at Le Mans we would be ninth, I couldn't be faster' - Marc Marquez

Although he said goodbye to the France GP with the goals he set himself, Marc Marquez explained at the end of the race that he didn't have the pace to go faster and that without the crashes ahead of him, he would have fallen short of the targets for the sunday. His day however didn't start in the best way, with the rider not feeling well right after waking up.

More stock than we can sell - offloading Suzuki

A customer’s perception is reality. Although not yet entirely set in stone, Suzuki’s departure from MotoGP seems more and more likely as the days drag on. The riders are visibly weary of their predicament, as is their team. As a consumer myself the very way in which Suzuki has handled this break up has left me feeling that as a brand, they are completely lost for direction. They seem untrustworthy from a consumers point of view. It’s a pretty horrendous time for everyone involved. (just between us though, Aleix Espargaro did say he’s excited to be the best bike on the grid in 2023 though. So that’s nice for him)

'In my position you can't be everyone's friend, not even the riders' - Livio Suppo

Livio Suppo arrived in 2022 and has taken up the duties of Team Manager at Team Suzuki Ecstar. The Italian has previously worked at Honda and Ducati and was one of those responsible for Casey Stoner and Marc Márquez becoming champions in MotoGP.

Autódromo Internacional do Algarve – April 24th. - At the 2020 Portuguese GP, he made his 141st premier class start (and last) of his career with Ducati; he qualified 12th and finished the race in sixth place for his most recent top six finish.

Steve Sargent, Chief Product Officer, Triumph Motorcycles:. “The Grand Prix at COTA was a real race of attrition with many front-runners not scoring any points, such as 2022 race winners Celestino Vietti and Somkiat Chantra, and contenders Aron Canet, Sam Lowes, Fermin Aldeguer and several more. The result meant that the standings have opened up and we welcomed Tony Arbolino to the list of Moto2 winners using Triumph 765cc triple power. Celestino still holds the lead of the World Championship but his points gap is now much reduced and behind him there are four riders all within 11 points of each other. We are very pleased to have powered Aron and Cameron Beaubier to new race and outright COTA lap records respectively too – the sign of a hotly competitive weekend.”

Could Takaaki Nakagami be in danger with the rise of Ai Ogura?

Takaaki Nakagami became the first full-time Japanese in MotoGP in a long time in 2018, but after five years he may have his place in jeopardy - at least at LCR Honda - with compatriot Ai Ogura emerging in the Moto2 World Championship.

Chicho Lorenzo and the current Yamaha's moment: 'Signing with Darryn Binder was a good crap, and Morbidelli disappeared'

Chicho Lorenzo was 'attacking' Yamaha and is of the opinion that the team had casting errors, especially when it comes to satellite, while regretting the current moment of Franco Morbidelli.

Time for new stars: Rookies Cup kicks off in Portimão

With the arrival of MotoGP in Europe, the 2022 season of the Red Bull MotoGP Rookies Cup begins, which is part of the Portuguese GP program in Portimão next weekend. There will be seven rounds, with two races each, until September. The squad has 26 riders, who attack the title and succession to David Alonso. With last year's top seven finishers reaching the world championships, the highest ranking that remains is Tatchakorn Buasri - who in 2021 achieved four podiums.There are seven more riders who remain, but the vast majority are newcomers or embark on the first full season: four of the 26 registrants participated sporadically in the last year.

Lin Jarvis points out the two problems with M1

Yamaha team boss Lin Jarvis points to the two problems encountered by the M1 during the MotoGP weekend in Qatar, related to the new aerodynamic wings. For the Yamaha team, the Mandalika round will have a decisive character for defining plans in MotoGP. After ninth and eleventh places for Fabio Quartararo and Franco Morbidelli respectively. The Iwata based brand are now hoping to take a step forward after an initial disappointment, at a circuit where they have already achieved good results.

Bend the knee to the King: Enea Bastianini debuts on MotoGP wins at Losail

History was written for Gresini Racing in Qatar. Enea Bastianini makes his debut to win in MotoGP in a race of great level and growing for the rider, on a day where Brad Binder was second and Pol Espargaró third. This victory means the return to the wins to the italian team, which didn't happen since 2006 with Toni Elias.

No mistakes in the victory for Celestino Vietti in Qatar. The rider made the best use of his pole position to win the intermediate class race in Qatar. Great start to the race for pole position owner Celestino Vietti, as well as Tony Arbolino and Arón Canet, from ninth to third. Pedro Acosta, considered by many to be one of the favorites, was 24th after a bad start when he was forced to make the first corner too far.

The first Warm Up session of the year came to an end, with Enea Bastianini being the fastest on the track. Johann Zarco reached second in the final seconds and released Miguel Oliveira to fourth. Aleix Espargaró was third.

With the end of another edition of the Dakar Rally last january, Yamaha saw Adrien van Beveren and Andrew Short finish in fourth and eighth places, respectively. However, this participation was also the end of a journey of 44 editions, which Yamaha decided to put an end to. The japanese manufacturer announced today that it is withdrawing from future participation in the Dakar and also in the Cross-Country Rallies World Championship.

Mandalika was a Nightmare, so was the race simulation for Fabio Quartararo

On the third day of testing at Mandalika, many riders chose to do a race simulation at the indonesian track, and Fabio Quartararo also did so, but considered it a real nightmare in the end, due to the tyre choices he had to put on the motorcycle.

Forty years ago the original XT600 Ténéré made real adventure a possibility for everyone. Developed from Yamaha’s Dakar race bikes, the first Ténéré literally opened up a new world for any rider with the desire to get away from the ordinary, escape from their comfort zone and see new faraway places.

The general opinion of MotoGP riders on the Mandalika circuit was that the conditions were on the verge of sustainable for testing, but far from practicable for competition. In question is the dirty asphalt and with some problems in its own integrity dropping stones with the passage of the motorcycles.

‘If you are slow, having a bike that is easy to ride isn't important’ – Andrea Dovizioso

One of the aspects that is talked about in adapting to a MotoGP bike for a rider who is new to it has to do with the ease of riding. In the opinion of Andrea Dovizioso, who is now rediscovering the Yamaha YZR-M1, this cannot only be considered, as speed is also a crucial element of the equation.