Adventure journalist Morgan Tilton covers the outdoors with a focus on travel, industry news and human endurance. Featured in more than 70 publications, she’s a recipient of more than a dozen North American Travel Journalists Association awards.

How to stay safe from black bears while camping and hiking 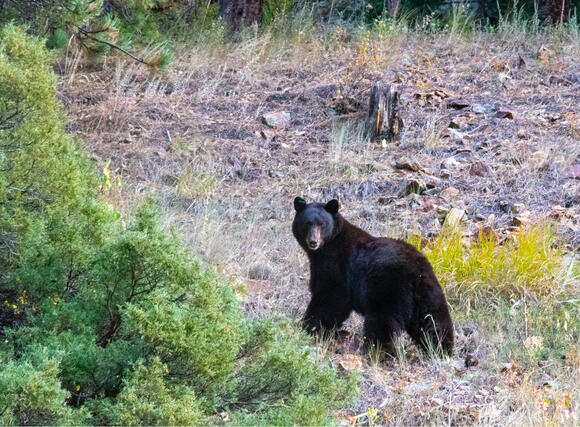 Black bears are typically shy and run away from people.(Photo by Jason Clay.)

How to stay safe from black bears while camping and hiking

The number of people living in Colorado and exploring the outdoors continues to grow — and so does the opportunity for humans to come across black bears.

Nearly 12,000 black bears inhabit the Centennial State ranging in color from brown to cinnamon, blonde or black, according to Colorado Parks and Wildlife (CPW).

Most human and bear encounters involve food. From late summer to early fall, bears seek 20,000 calories per day to stock up for winter hibernation from November to mid-March.

The stocky mammal can reach up to 600 pounds. As an opportunistic hunter, the black bear follows its nose—which is 100 times more sensitive than a human’s—and can smell food up to five miles away.

A total of 89 bear attacks on humans have been reported in Colorado since 1960, according to CPW records.

The most recent death was in 2021: 39-year-old Laney Malavolta was walking her dogs when she was mauled by a sow north of Durango.

To date, nearly 2,181 reports of sightings and encounters with bears have been recorded in 2022. In 29 of those situations, bears were relocated, and 51 bears were euthanized.

Euthanasia is not frequently necessary. “Some people are reluctant to report bears to CPW because of a false belief that we will euthanize the bear….Over a three year period, only 2.3 % of reports led to euthanization,” said Joey Livingston, Statewide Public Information Officer for Colorado Parks and Wildlife.

Bear-human incidents are influenced by weather patterns and climate change including spring freezes and drought, which affect the natural forage that is available.

The total number of bear reports filed from Colorado’s northwest region was up year over year in 2021 because of severe drought, according to the 2021 Bear Conflicts Report released by CPW, while the volume of reports in other regions dropped where precipitation was adequate through winter, spring, and summer.

“The less natural food in a given year, the more bears come into human areas looking for food. In Colorado, a localized spring freeze can affect bear incidents in small sections of the state,” said Livingston.

The vast majority of a bear’s diet is grass, berries, fruit, nuts, and other plants plus insects and scavenged carcasses, reports the CPW.

How to avoid black bears while camping

Run-ins with bears can be mitigated through simple practices that keep food secure.

Whether you’re at an established campground or a remote designated campsite, the best action to take, according to Livingston, is to “eliminate scent attractants and secure food. Bears spend their day looking for any possible food sources and will return to areas they received a food reward. If you prevent a food reward, they have little reason to come back.”

Bears are intelligent, have excellent memories and will return to places where they’ve found food.

Scent attractants are items with an odor such as:

Consider recycled items, too. Though the 2021 death of camper Leah Lokan occurred with a grizzly bear, which is a subspecies of the brown bear, officials found that two reused dried blueberry bags may have played a role in the attack.

Scented items should be secured at night and during the day when unattended.

To secure scented items while car camping or overlanding, place them in air tight containers or double bag them and lock them inside a vehicle or R.V. “Bears can learn to open unlocked car doors,” said Livingston.

Otherwise, some established campground campsites feature a bear-proof storage locker that is mounted to the ground. (Remember to take everything out and with you when you leave including trash.)

If you are backpacking, consider carrying a bear canister, which is a portable, hard-sided container that can be rented or purchased from an outdoor retailer. Choose a bear canister that has been approved by the Interagency Grizzly Bear Committee (IGBC) such as the BearVault BV500 Journey Bear Canister.

Certain areas such as the White River National Forest require the use of bear canisters, so check the requirements with the land management office where you plant to visit.

When you use a bear canister, store it at least 100 yards away from your tent on the ground, ideally hidden by vegetation or boulders, according to the National Park Service. Also store plates and pans away from camp, Livingston noted. Be sure not to set down the canister where it could roll into a body of water or off a ledge, which a bear or other creature could catalyze.

Another traditional tactic is to hang food and scented items from a tree using the counterbalance method. However, bears in certain locations have learned how to snag those bags, reports the National Park Service.

Plus, the counterbalance method is time-consuming to complete: Two filled bags need to be hung 20 feet off the ground on a branch that is 10 feet away form the trunk.

The IGBC has also certified a huge range of hard-sided coolers such as the Jackson Kayak Orion Core (25- to 85-quart), Orca Cooler (20- to 140-quart), or the RovR RollR (45 to 89-quart). Typically, bear-resistant coolers require the use of bolts or padlocks to be effective.

If a bear approaches your campsite, “Stand up, make yourself seem bigger by raising your arms over your head and back away. Do not approach the bear. Make some noise like yelling at the bear to go away. Get into your vehicle and lock the doors. Honk your car door or blow an air horn to try to scare the bear away,” said Livingston.

“Once the bear leaves, pack up and move to another area and do a better job of removing food and scent attractants from your new camp,” Livingston added.

If you stumble across a bear on trail, follow the same steps: make yourself larger by raising your arms over your head, do not approach the bear, and make noise such as yelling at the bear to go away.

Also, “Back away slowly down the trail the way you came or move off the trail to give the bear space,” said Livingston. Basically, “make your presence known so the bear has an opportunity to leave the area,” he added.

You can carry a few tools to help scare persistent bears away including bear spray.

“Bear spray is preferred to a firearm. If you spray a bear with bear spray, you take away its sense of sight and smell so it cannot find you,” said Livingston. Be sure to know how to safely use bear spray.

Audible devices can be utilized, too, such as a whistle, air horn, or personal safety alarms like the eAlarm made by BASU.

Livingston said, “Any unfamiliar noise can scare off a black bear.”

Adventure journalist Morgan Tilton covers the outdoors with a focus on travel, industry news and human endurance. Featured in more than 70 publications, she’s a recipient of more than a dozen North American Travel Journalists Association awards.

New Gold Mountain Via Ferrata climbs through Memphis Mine above Ouray

Founder Sam Degenhard greets campers at the Campfire Ranch central headquarters along the Taylor RiverPhoto provided by Morgan Tilton. On the southerly side of a bend in the Taylor River sits a well-manicured campground with hints of luxury called Campfire Ranch, 189 miles southwest of Denver.

A backcountry snowmobilerPhoto provided by David Clifford Photography and Backbone Media. Lack of on-snow snowmobile safety training is one of the leading factors that contribute to motorized avalanche accidents according to the 2022 U.S. Motorized Avalanche Fatalities Report released by avalanche safety educator Mike Duffy.

Lift operations at a Vail Resorts partners ski areaPhoto by Vail Resorts. Paper lift tickets and plastic ski passes will soon become relics of the past. Headquartered in Broomfield, Vail Resorts will launch new technology that allows skiers and snowboarders to complete a digital scan using their phones at the company’s ski resorts.

First Ascent offers three varieties of handcrafted instant coffeePhoto by First Ascent. A four-member NASA astronaut crew blasted skyward from Launch Pad 39A at the Kennedy Space Center in Florida last week—with a special taste of Colorado in their cargo.

10 tips to help you prepare for riding the Palisade Plunge

What is the Palisade Plunge and why is it a big deal?

Author and mountain biker Morgan Tilton looks down on Palisade from a high point on the Palisade PlungePhoto by Eric Phillips. One of the country’s newest and lengthiest mountain bike trails recently opened on Colorado’s Western Slope in Palisade, which is well known for harvesting state-grown wine and fruit.

What to expect on the Palisade Plunge mountain bike route

Mountain biker Eric Phillips navigates follows through tight switchbacks on the lower-third of the Palisade Plunge route.Photo by Morgan Tilton. The Palisade Plunge is one of the country’s newest, lengthiest mountain bike trails, which recently opened on Colorado’s Western Slope.

Where to stay when you ride the Palisade Plunge

The lobby and in-house bar of the Spoke and Vine Motel in Palisade, ColoradoPhoto by Morgan Tilton. We enjoy camping and looked into the camping options when we planned our trip to mountain bike the 32-mile Palisade Plunge, but it didn’t seem to complement our needs this go-around.

Where to eat when you ride the Palisade Plunge

Mountain biker Eric Phillips enjoys homemade peach ice cream at Mclean Farms in Palisade, ColoradoPhoto by Morgan Tilton. Fueling up before a big adventure and replenishing afterward is one of the most enjoyable, best, and important parts of mountain bike endurance rides.

What basic gear do you need to hike a Colorado 14er?

Raised and still living in Colorado’s high-altitude hamlets, I first started hiking the state’s 14,000-foot peaks when I was a college student more than a decade ago. Today, I’ve climbed more than 40 of the 58 fourteeners that I aim to ascend on foot including official and unofficial peaks.

How to hike your first Colorado 14er

Descending the North Ridge of Ellingwood Point.Photo by Morgan Tilton. Colorado 14ers are the highest peaks in the nation and reach 14,000 feet above sea level or more. Across the state, there are 58 officially named 14,000-foot peaks that are clustered together in seven different subranges of the Rocky Mountains.

What are Colorado 14ers? And why are they a big deal?

Author Morgan Tilton on the summit of Castle Peak.Photo provided by Morgan Tilton. A smattering of the country’s highest-reaching peaks decorates each quadrant of Colorado and stands 14,000 feet or more above sea level. Those summits are colloquially known as fourteeners or 14ers.

Where to enjoy via ferrata routes in Colorado

Writer Morgan Tilton climbing the Ouray Via Ferrata.Photo by photographer, videographer, drone pilot and digital (NFT) artist Eric Phillips. Colorado is home to more than half of the country’s official via ferrata routes.

Best ways to see Colorado's fall colors from up high

The Maroon Bells and Maroon Lake during fall foliage in Colorado.Photo by Scott Mecum. From September to early October, the flying aspen colors take off at higher elevations and in northern Colorado.

SUPing on Carter Lake 54 miles north of Downtown Denver.(Photo by Visit Loveland.) Stand-up paddleboarding remains one of the most increasingly popular outdoor sports nationwide -- and Colorado is speckled with picturesque lakes and rivers that boast jaw-dropping mountain views: a perfect pairing for the sport.