Orlando-Based Creative | Copywriter and Content Strategist Creating content about activities in Orlando, and creative living here in the sunshine state.

How to Tighten and Fine-Tune Your Writing 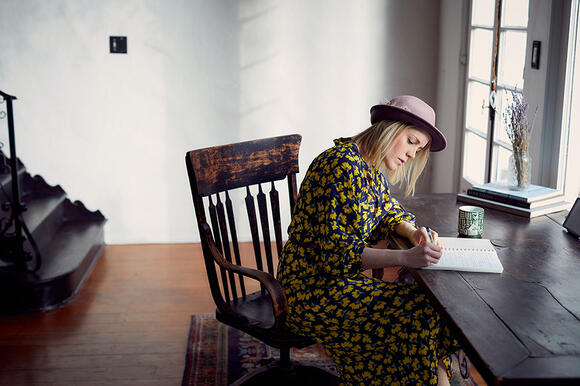 I had a professor who was well-known as being an all-around prick, as many English Composition professors tend to be. I dreaded his class and his holier-than-thou attitude.

At the time I was only concerned with my final grade. Now, roughly three years later, I am beginning to appreciate what this professor taught us with his dreaded one-page papers. That’s right, you had to argue your point in exactly 500 words. If you ventured ahead of the limit you would get points deducted for each extra word.

I’m long-winded by nature. This professor presented me with the first problem I had faced in an English classroom, paring down what I was attempting to say into one concise page while still making a strong argument and giving an articulate and educated insight on the topic.

We argued about gun control, abortion, homelessness, and more. These big-ticket issues that could easily evolve into an hour-long debate had to be conformed to fit a single sheet of paper.

To survive that semester I developed a system of writing and editing that went a bit like this four-step process:

You need to be able to sit down at the keyboard and not reference a single source until after you have frantically placed your thoughts onto the page. You must become an expert and earn the credibility to talk about each and every experience, thought, or premise you are describing. So learn your shit, folks.

This seems counterproductive, right? If you’re an overwriter, don’t pen an entire novella. That’s not the point. You need to get all of your thoughts onto paper. Don’t worry about making it wordy and intelligent, just put pen to paper and word vomit your argument.

Pretend you’ve never read this paper in your life, much less wrote it. In fact, pretend this is the paper of that annoying kid that sits behind you and it always asking ridiculously obvious questions and offering unneeded snide remarks to the narrative. You are editing his paper and you fucking hate that kid. Take a red pen to that sucker and — Mark. It. Up. Strip the paper down to its core. That is where you will find your completed masterpiece.

But you’re not done yet. You better re-read that paper until you have dreams about it and until you can recite it backward while cooking dinner for your in-laws who are questioning your ability to cook without so much as stumbling over a single syllable. Give it to your best friend, give it to your boyfriend, read it to your cat. Make sure that it sounds fluid and to the point. If somebody gets bored and looks away midway through a sentence, review that sentence.

As you can tell. I am still learning and developing even seven years after this lesson was taught to me. But this paper is right at 500 words, so maybe I have picked up on something.

Orlando-Based Creative | Copywriter and Content Strategist Creating content about activities in Orlando, and creative living here in the sunshine state.

Starting from scratch or looking for that one final vendor? August’s lineup of Orlando wedding expos has a number of bridal-focused festivities to keep you busy tackling all your wedding planning to-dos. From Orlando Science Center’s Unveil Wedding Showcase to the Florida Bridal & Event Expo at DoubleTree, you’ll have enough events to thoroughly book your August calendar.

Many individuals and families who normally squeeze in at least one vacation have been grounded in their hometowns for 2020 and much of 2021. But with people filled to the brim with wanderlust, Port of Go! is bringing all the necessary travel inspiration to one place on July 31 and August 1: the Orange County Convention Center in Orlando. This event will include seminars, panel discussions, entertainment, and more. In the wake of COVID-19 and its effect on the tourism industry, this event will provide a career fair and stoke excitement for travel. This international destination and travel expo is being organized by Othal Partners.

July Fourth is right around the corner with only a few days to go before it's time for cookouts and fireworks. If you’re in the Orlando area and looking for July 4 celebrations, you’ll want to browse this list of locations hosting firework displays and other July 4 goodness. From the big theme parks to Lake Eola in Downtown Orlando, these are all the July 4 fireworks displays in the area happening next weekend.

Tampa has no shortage of bakeries available to grab a sweet bite to eat before heading out for the day. Looking to sink your teeth into delicious doughy goodness? Thought so. Check out these three Tampa bakeries, hand-picked for their yummy confectionaries. From the quirky Dough to the traditional handmade donuts at Nicola’s Donuts, you won’t be disappointed by these Tampa area picks.

Orlando and the Greater Orlando area is expansive enough that you can always find something exciting to go see. July 2021 is no exception. From Lake Nona to Downtown Sanford, we’ve collected a highlight reel of all the art events you’ll want to attend next month.

4 Orlando Bakeries to Visit for a Sweet Treat

Orlando is home to numerous bakeries. You’ll want to check out each and every one of these spots to find the spots that make doughnuts you can’t get enough of. Looking for a sweet treat you can savor before heading into the office? Check out the following four Orlando bakeries that are ready to satiate all your sweet cravings.

4 Parks in Orlando to Enjoy Time Immersed in Nature

We’re not talking about theme parks. Check out this roundup of the best nature parks in the Orlando area to enjoy immersing yourself in nature. It’s important to spend time away from the noisy city life, especially as Orlando continues to become more and more crowded. Take advantage of the peace and serenity you can find in these green spaces.

Wedding planning is rough. Wedding expos make it better. Check out these four wedding events coming up in July 2021 to help you with all your planning needs. Wedding expos are a great way to find vendors, get inspired, and figure out what you do and don’t want on your big day.

Check Out These 2 Unforgettable Animal Attractions in Central Florida

With the “Big Ones” like Animal Kingdom and Busch Gardens out of the way, you may be searching for a new animal-focused attraction to enjoy with your partner or children. Lucky for you, Central Florida has no shortage of zoos and animal attractions. From afternoon trips to full day excursions, check out these top spots to visit to learn more about the lovely creatures we share this planet with.

If you’ve lived in the Central Florida area for any length of time you’re probably already familiar with SeaWorld. This marine zoological park and theme park is known for its aquatic animals. In recent years and after backlash due to the documentary “Blackfish”, SeaWorld made an overall shift to focus on the thrills and theme park part of their attraction. If you’re tired of SeaWorld or are looking for an alternative for animal welfare reasons, check out these other notable aquarium and sea life attractions in the Central Florida area.

Surprise Your Pup With a Trip to These Orlando Pet Bakeries

There’s only one thing better than going to a human bakery and that’s taking your dog to a pet bakery. When your diet consists of mostly kibble, a bakery is undoubtedly an appreciated haven. Lucky for Orlandian pups, there are a few bakeries in the area where you can pick up treats and toys for your four-legged companions. Beyond the most well-known chain of pet bakeries, Woof Gang Bakery, there are other local options you’ll want to check out. If these shops are out of the way for you though, we can almost guarantee there will be a Woof Gang Bakery close by.

3 Pizza Parlors in Orlando You Won't Want to Miss

Pizza is sort of difficult to mess up, but you’ll know a high-quality pie from a subpar one within one bite. If you don’t want to waste your money on the typical chain pizza places like Pizza Hut or Papa Johns, then you’ll find yourself plenty pleased with these three delicious spots. Whether you’re firmly cheese only or you’re an everything and then some type of person, you’re sure to love at least one (if not all) or these local pizza places in the Orlando area.

May 2021 has brought in a number of new restaurants and shops to the Orlando area among which is KOS, a coffee shop and brand that focuses on social good and inspiring Koselig living. This shop, inspired by the Norwegian heritage of the owners and the Norwegian word koselig, meaning coziness, offers both goods and sips at their new 129 W. Fairbanks Avenue location. Stop by this airy and bright coffee shop to add a little more coziness to your morning.

Eventually you’re just one It’s a Small World or Haunted Mansion ride away from being sick of your Disney passes. The timeless rides get a bit faded even for the most avid Disney-goer when nothing new is thrown in to add a bit of spice to the usual Disney day-trip. Luckily, Walt Disney World Resort is pretty much always in the process of releasing a new ride or attraction in it’s various Orlando parks.

Whether your sweet tooth is acting up or you want to celebrate an important occasion, Tampa is home to enough dessert experiences to give anyone a stomachache. From DIY, hands-on dessert creation to adult cocktails like you’ve never seen before, check out The Cake Drip, Harry Waugh Dessert Room, and Beans and Barlour for Tampa area dessert spots every local should try at least once.

Ready to plan your big day in Orlando? You’ll want to plan a visit to one of these bridal expos and showcases to take advantage of all the vendors you could imagine in one central location. Wedding expos give couples the opportunity to knock off major to-do list items from the neverending wedding planning checklist. Take your partner or your maid of honor along with you and if they grumble just remind them that these events almost always have tasty food to sample from bakeries and caterers. (Bonus!) Check out the events you can look forward to this June and be sure to purchase any tickets in advance to reserve your spot and, usually, score a discount.

There’s nothing like high-quality BBQ to hit that comfort food craving and Orlando is no stranger to delicious melt-in-your-mouth pulled pork and fall-off-the-bones tender ribs. If you’ve got a hunger for BBQ, try Pig Floyd’s Urban Barbakoa, Bubbalou’s Bodacious Bar-B-Que, and 4Rivers Smokehouse.

The Monroe, the fourth concept by Good Salt Restaurant Group, opened at 448 N Terry Avenue on May 25 in Downtown Orlando’s Creative Village. This 4,000 square foot dining and entertainment space is located on the ground floor of The Julian Apartments. This gathering space features a coffee shop, lounge, and dining rooms. Executive Chef Josh Oakley has prepared a menu that features everything from royal red shrimp to beef short rib. This new and exciting menu is sure to drum up nostalgic feelings for childhood comfort foods reimagined.

Supporting your sewing hobby at one of the typical retail chains is likely an economical or convenience-related choice. If you’ve always gone to Michael’s or Hobby Lobby for your sewing and needlework supplies, it’s familiar and comfortable. But there are undoubtedly better options. Check out these locally-owned sewing and needlepoint shops. The benefits of shopping local for specialty goods is an improved selection of products and staff who have acute knowledge. Chances are good you’ll walk away from one of these four locally-owned sewing shops with better products (probably more products too) and an expanded understanding of your hobby.