Full-time mom, student, and writer. I cover everything from parenting and personal finance to relationships and health. 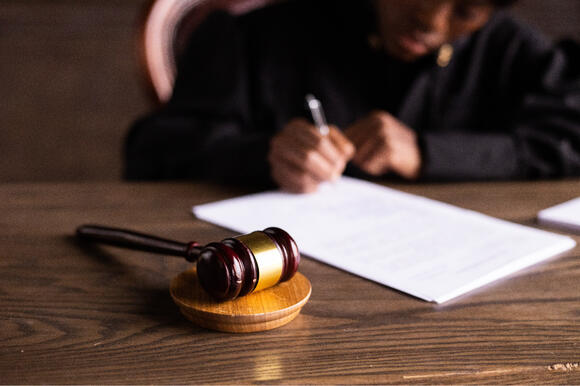 Photo by Ekaterina Bolovtsova from Pexels

"Finally! People are finally listening to what I've been saying all along," one Missouri mom excitedly says after seeing a post that's been circulating about corruption in the St. Louis courts. The mom, who agreed to speak on the condition of anonymity, says she was a victim of legal misconduct in St. Louis, Missouri. The judge and guardian ad litem (GAL) assigned to her case conspired to strip this mom of her custodial rights, eventually giving the father primary custody.

The reason? The mother reported that the father was abusing their children. Despite having proof of the father's violent criminal history and a lengthy list of DFS investigations, the GAL insisted the father wasn't a threat to the children's safety. The judge sided with the GAL, which is often the case in high-conflict custody battles, but not before ordering the mom to undergo a costly psych evaluation, mediation, coparenting counseling, and numerous other services.

The mom wants to fight the decision, but she can't afford a new lawyer. Besides, she explains, "They're all working together anyway. Mine was scared to go against the GAL."

It's a common complaint among Missouri parents, but they aren't remaining silent about the injustices they've experienced any longer. Several Missouri parents were interviewed by journalists Megan Fox and Michael Volpe about the corruption in the St. Louis County family court, with special attention given to cases handled by Judge Nicole Zellweger and GAL Elaine Pudlowski. Pudlowski is currently the defendant in multiple lawsuits that allege she willingly sent kids to live with abusers and colluded with court-appointed mental health providers to make healthy parents appear unstable. This money-making scheme resulted in healthy parents fighting to appeal evaluation results and overturn custody rulings, thus padding the wallets of Pudlowski and her accomplices.

But she's not the only GAL from St. Louis County accused of violating legal ethics and placing children in danger. She's also not the only legal professional who violates state guidelines regarding communication between judges and other GALs. These violations were exposed in January 2021 when a Zoom meeting between Pudlowski and approximately 40 other GALs from St. Louis County was secretly recorded.

In this video, the GALs discuss pooling resources to hire a forensic team so they can find the mole who is sharing information about Pudlowski. During this Zoom meeting, GALs also voice other concerns, none of which involve anyone being upset about the children who've been endangered by corrupt GALs and judges in the area. Instead, they're worried about their careers and how the public feels about their alleged wrongdoings. One GAL even complains that Pudlowski's exposure may result in higher standards for Missouri GALs.

This comment is a great reminder that corruption isn't limited to St. Louis County. In fact, several of the St. Louis GALs in the leaked Zoom video also practice in St. Charles County. Multiple journalists have covered the corruption in nearby St. Charles County family courts recently, and they're not done yet. Several writers are raising funds so they can travel to Missouri and continue exposing corruption in the justice system. It might be the only way the news will get out, as local journalists and legal professionals are often hesitant to speak up about what happens during Missouri court hearings. They fear retaliation.

One lawyer privately told me that many lawyers, judges, and GALs are part of a big clique in the St. Louis area. If you speak out about unethical behavior, you lose your spot in the clique, and judges purposely rule against you in the courtroom. Because of this, some lawyers look the other way when corruption occurs even though they don't actively participate in any misconduct themselves.

Nobody should be afraid to discuss what happens in the legal system or speak out when they feel unsafe. Every legal professional deserves ethical colleagues, every parent has the right to a fair trial, and every child should be heard when they report abuse or neglect. Sadly, that's not happening in every Missouri courtroom right now, but there's hope for the future. Parents are starting to share their horrible experiences now that whistleblowers have leaked documents and videos of unethical behavior, and they won't stop until the system is overhauled.

Full-time mom, student, and writer. I cover everything from parenting and personal finance to relationships and health.

Missouri Residents Can Give the Gift of Electricity This Christmas

Surprise someone special with utility assistance as winter approaches. You can give a loved one or your favorite business the gift of electricity this year thanks to Ameren's popular program.Photo by Andrea Piacquadio from Pexels.

Volunteers temporarily stopped traffic on Hwy K. Thousands of local residents enjoyed a free Thanksgiving meal from Brass Rail.Photo by Karolina Grabowska from Pexels. Many local families struggle during the holiday season. Hectic work schedules, medical conditions, and budget constraints are just a few of the factors that can make Thanksgiving prep difficult.

Wait until you know each other better to discuss certain topics. Don't overshare on your first datePhoto by Jep Gambardella from Pexels. A whopping 84% of American women say that a great personality is more important than looks, and 69% of men agree. That’s why first dates are so important. If you come across as rude, obnoxious, or insecure, you may scare off potential partners before your romance has a chance to develop.

Need Help With Christmas Gifts for Your Kids? Try These Resources

Help Santa make Christmas magical this year with assistance from these organizations. Get help with Christmas gifts for your kids this year.Photo by RODNAE Productions from Pexels.

Do People Expect Too Much From Minimum Wage Workers?

Do you hold minimum wage workers to a higher standard than other employees?. Treat minimum wage workers with respect and kindnessPhoto by Ketut Subiyanto from Pexels. Restaurants can’t find enough workers in my area, so they close early if staff from other locations can’t help. That statement may not surprise you, as the labor shortage extends far beyond my region. There are hiring problems across the country right now, and a large chunk of these issues involve restaurants, retail gigs, and other low-wage jobs.

Here's Why You Should Think Highly of Your Skills or Ideas

Believe in yourself, whether you're making minimum wage or running a billion-dollar company. Your skills are valuable to someone in the world.Photo by Vitaliy Izonin from Pexels.

Here's What Happens to Your Lungs When You Drink Coffee

If you have asthma, drinking coffee may alleviate symptoms. Caffeine can help some people reduce their asthma symptomsPhoto by Andrea Piacquadio from Pexels. I stumbled through my daughter’s job, lugging my heavy cart to the checkout after she told me it was break time. We had dinner plans, but I was exhausted. I was running on 2.5 hours of sleep, and I usually need a solid 8 to 10 hours to get by.

How to Lower Your Blood Pressure Naturally

Enjoy a slice of pepperoni pizza today!Photo by cottonbro from Pexels. Not in the mood to cook today? No problem - after all, September 20, 2021, is National Pepperoni Pizza Day. Now you have the perfect excuse to order pizza for carryout or delivery.

Distractions You Might Experience When You Work From Home

Protect your career by setting healthy boundaries. Don't be afraid to set boundaries as a work-from-home mom or dad.Photo by Anastasia Shuraeva from Pexels. You’ve got a fresh mug of coffee on your desk, and you’re wearing your favorite sweatpants. Your laptop is powered on and ready for a productive day. You’re ready to tackle your workload while the kids are napping or watching a TV show.

Looking for a Healthcare Career? Check Out These Hiring Events

Tackle your career goals by attending these hiring events. Pursue a career in healthcare by visiting these job fairsPhoto by Anna Tarazevich from Pexels. COVID-19 has increased the demand for healthcare workers in Missouri. Learn more about having a rewarding career at a hospital, doctor's office, or other medical facilities when you visit a local career fair in September. Job openings are available for many popular healthcare positions, and not all of them require a college degree. In fact, you only need a high school diploma or GED for some entry-level healthcare jobs in Missouri.

10 Ways to Celebrate Random Acts of Kindness Day in Missouri

Seniors Can Shop for Free Groceries at This St. Louis County Church

Let your favorite senior citizens know about this incredible opportunity in Hazelwood. Hope Church lets seniors shop for free this SeptemberPhoto by Andrea Piacquadio from Pexels.

7 Tips for Dealing With a Narcissist Boyfriend

Your boyfriend is attractive, intelligent, and charming — and he makes sure everyone knows it. If you can relate to that statement, your sweetheart might be a narcissist. Nearly 8% of American males have narcissistic personality disorder (NPD), a condition that's been getting lots of press lately. Narcissists often appear outgoing, confident, and fun, but feelings of shame or inadequacy lurk beneath their charismatic exterior.

Before You Complain About Food Stamps, Read This

“After reviewing your credit history, we regret to inform you…”. If you have fair or poor credit, you probably recognize these words. They’re basically a polite way of saying, “Sorry, your credit stinks. We don’t give people like you credit cards.”

A Story About Cats for People Who Say All Lives Matter

I used to claim I didn’t see color. Back in high school and my early 20s, I made cringeworthy statements like “I’m colorblind.” I was a member of my school’s cultural diversity club and owned a shirt that said “One Race: Human” on the front.

You Won't Believe These Shocking Facts About Bipolar Disorder

Bipolar disorder is a chronic condition that affects more than 5.7 million Americans, which is approximately 2.6% of the adult population. This mental illness is characterized by periods of mania and depression, and it is usually treated with a combination of counseling and prescription drugs. Occasionally, other treatments such as ECT and light therapy are used for patients with bipolar disorder.