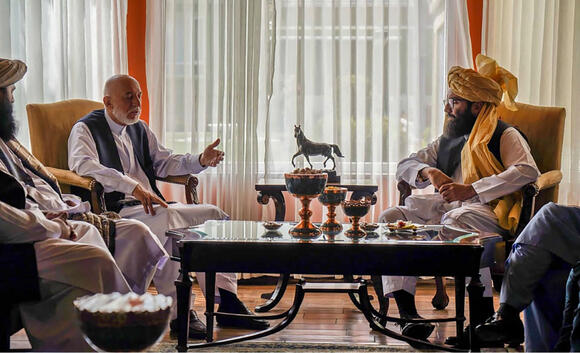 Karzai meets with the Taliban.Getty Images

Karzai seems ready to get back to those good ole days saying, "The Taliban government in Afghanistan needs internal legitimacy for it to gain international recognition. Encouraging expression of the free will of the Afghan people should happen in the form of elections throughout the country."

This weekend, Karzai spoke with the Voice of America, charging that Afghanistan is at a critical juncture in its history and Afghans should “unite” and create a government premised on “the expression of the will of the Afghan people.”

“Legitimacy within our own country for this government [Taliban] or any other government is the foundation of recognition by countries and the international community,” Karzai said.

“How to bring about legitimacy within the country is of course premised on either an election or, in the case of Afghanistan, especially under the current circumstances, the expression of the will of the Afghan people through the Loya Jirga and the introduction of a constitution and so on,” he added.

Karzai became president in the aftermath of the American invasion of Afghanistan in autumn 2001. He served as president until 2014, running a government defined by rampant corruption, nepotism, and record-breaking narcotics cultivation. Estimates of how much money Karzai and his family stole from U.S. taxpayers range into the billions.

Now, he looks to establish a new lucrative role in the Taliban government.