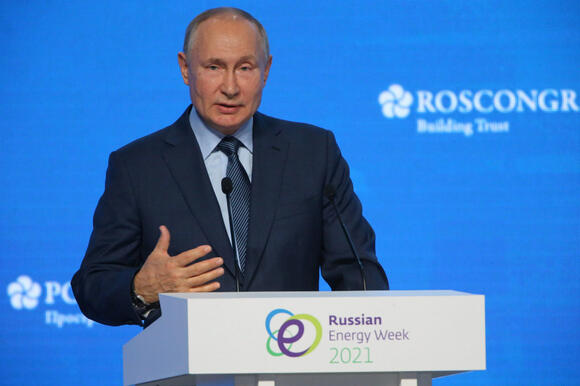 At a plenary session of Russian Energy Week, President Vladimir Putin said that Russia had overtaken the United States in high-tech weapons systems.

"The United States is only developing hypersonic missiles with a speed of slightly more than Mach 3. And our systems are flying at speeds in excess of Mach 20. It's not just a hypersonic missile; it's an intercontinental missile. And they are on combat duty already in Russia," Interfax quoted Putin as saying.

"I would like to draw your attention to the fact that we, having such systems, and for the first time in history, are overtaking our main competitors, in this case, the United States, in high-tech weapons systems. We do not abuse this, do not threaten anyone," Putin added.

According to Putin, the nuclear arms race had restarted as a result of the U.S. withdrawing from the Anti-Ballistic Missile Treaty in 2003. He said that he considered it "the cornerstone of international security."

Putin said, at the summit, last week, that Russia had two ways forward. "Either we create our own missile defense, which "costs a lot of money and it is not known how it will work," or to develop missiles that will overcome American defenses."

"I said we're going to do it. The answer from the American partners was as follows: our missile defense is not against you. You do what you want. We will proceed from the fact that it is not against us," Putin explained. The arms race "is not on our initiative," he stressed.