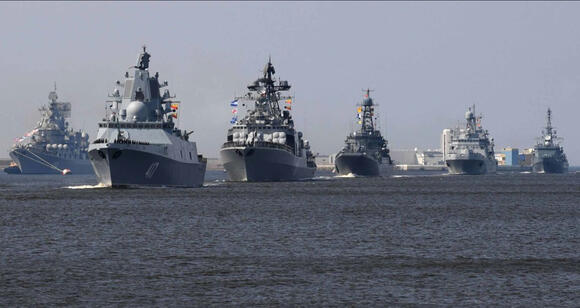 The U.S. Navy has rejected claims that they tried to enter "Russian territorial waters in the Sea of Japan during Russian-Chinese naval drills on October 15th."

"The Russian Defense Ministry's claim about the interaction between our two Navy ships is false," stated U.S. Navy's Pacific Fleet headquarters in a statement. "U.S. destroyer, the USS Chafee, was conducting routine operations in international water in the Sea of Japan on October 15 when a Russian Udaloy-class destroyer came within about 60 meters of it."

The U.S. statement described the encounter as "safe and professional," saying the ship was conducting operations "in accordance with international law and custom."

Russia’s Defense Ministry said the Russian ship, Admiral Tributes, approached the USS Chafee when it failed to adhere to warnings to leave an area declared off-limits due to exercises with artillery fire.

"The United States will continue to fly, sail, and operate where international law allows," the U.S. Navy said in defense.

Many analysts say that Moscow’s relations with the United States and its Western allies are at post-Cold War lows. The soured relations make the last few series of potentially dangerous close encounters between Russian and NATO warplanes and navy ships more likely to go from aggressive posturing to a real conflict.

This weekend incident was the second in four months. In June, Russia said it chased a British destroyer, claiming the vessel had breached Russian territorial waters.

In early April, Russia announced that it was closing off portions of the Black Sea off the Crimean Peninsula and near the Kerch Strait to foreign warships and other state vessels from April 24 to Oct. 31. The closures come when Russia is significantly building up its forces in Crimea and around the Ukrainian border on a scale not seen since it invaded Crimea in 2014.