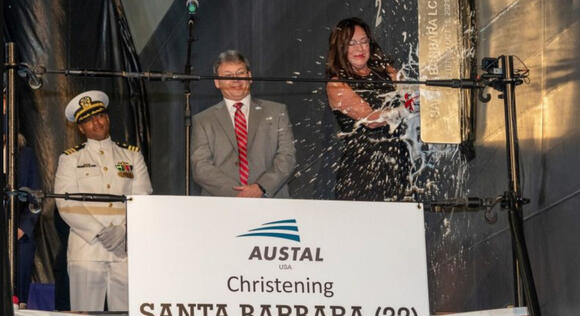 According to the United States Department of Defense, on October 16, 2021, the U.S. Navy has christened an Independence-variant littoral combat ship (LCS), the future USS Santa Barbara (LCS 32), during a ceremony that was held, Saturday, October 16, 2021.

LCS 32 is the 16th Freedom-variant LCS and 32nd in the LCS class. It is the third Navy ship named in honor of the city of Santa Barbara.

The propulsion systems of the LCS-32 include two gas turbines, two diesel engines, four waterjets, a retractable Azimuth thruster, and four diesel generators. She will be able to reach a top speed of 40 knots (87 km/h) with a maximum cruising range of 4,300 nautical miles (8,000 km) at 20 knots (37 km/h).