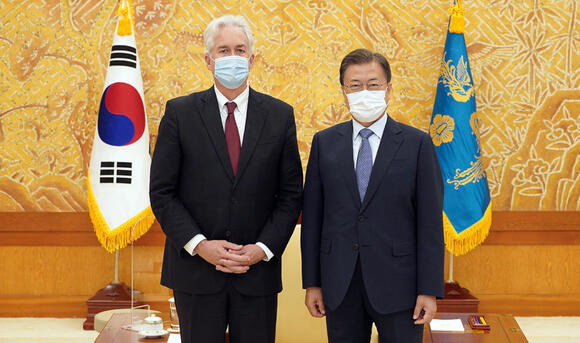 Last week, President Moon Jae-in held a meeting with the U.S. Central Intelligence Agency (CIA) chief to promote the Korea-U.S. alliance as a foundation of the nation's security.

The visit happened the same week that North Korean leader Kim Jong Un said, "The U.S. has frequently signaled it's not hostile to our state, but there is no action-based evidence to make us believe that they are not hostile. The U.S. is continuing to create tensions in the region with its wrong judgments and actions."

The Associated Press reported that Kim described the U.S. as a "source" of imbalance in the Koreas and pledged to build an "invincible military capability" for North Korea that potential opponents would not want to go up against.

It was a first visit to South Korea for CIA Director William Burns since taking the job. He expressed deep respect to Moon's efforts to maintain peace and stability on the Korean Peninsula, the presidential office Cheong Wa Dae said in a statement.

Moon and Burns discussed intelligence cooperation between the two allies and the current situation on the Korean Peninsula. They also discussed the 400 Afghans, who had helped the Korean government in their war-torn country and evacuated to South Korea.

Nuclear talks between Washington and Pyongyang have remained stalled since the Hanoi summit in 2019. Yang Wook, a military expert who teaches at South Korea's Hannam University, said, "Basically, North Korea wants to send this message: 'We'll continue to develop new weapons and arm ourselves with nuclear force, so don't slap sanctions with these as we can't agree on the double standards."