Michael Moates is a Journalist at NewsBreak. Moates is a Licensed Behavior Analyst with the Virginia Board of Medicine. He is a lifelong scholar focusing on studies in psychology, communications, education, and emergency response. He has an Associate of Arts in Criminal Justice, a Bachelor of Science with a concentration in Psychology, a Master of Arts with Areas of Study in Psychology and Communications, and is currently finishing up a Doctor of Education. He has been published by the Dallas Morning News, Daily KOS, Independent Journal Review, The Blaze, and the Denton Record Chronicle. 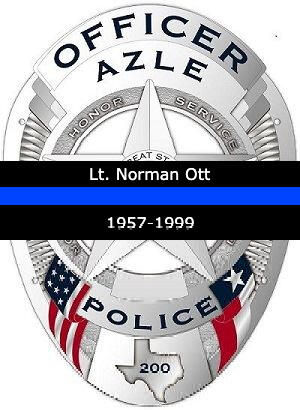 The Ott family has a long proud history of serving the citizens of Azle, Texas. Lt. Norman Ott, was a police officer with the Azle Police Department for many years from 1981-1994. Prior to that he worked for the Weatherford Police Department from 1979-1981. Lt. Ott served in various capacities including as a Drug Awareness Resistance Education Officer, police trainer, and even Interim Chief of Police. He was Azle Officer of the Year in 1988 and Azle Citizen of the Year in 1992.

He was also a big influencer in the operations of the police explorer program. After his death, his wife continued to support that legacy being present to receive a proclamation in January of 2010.

He is survived by his daughters hosted a Relay for Life Event at Azle High School. They did this to honor his legacy and promote life.

You can read his obituary here:

Background from TD: The idea of a Peace Officers Memorial Day came into effect on October 1, 1961, when Congress asked the president to designate May 15 to honor law enforcement officers. President John F Kennedy signed the bill into law on October 1, 1962. Each year, the president of the United States proclaims May 15 as Peace Officers Memorial Day and the calendar week of each year during which such May 15 occurs as Police Week.

According to the Legal Information Institute, the president is requested to issue a proclamation to: designate May 15 as Peace Officers Memorial Day; to direct government officials to display the United States flag at half staff on all government buildings; and to invite state and local governments and the people to observe the day with appropriate ceremonies and activities.

Michael Moates is a Journalist at NewsBreak. Moates is a Licensed Behavior Analyst with the Virginia Board of Medicine. He is a lifelong scholar focusing on studies in psychology, communications, education, and emergency response. He has an Associate of Arts in Criminal Justice, a Bachelor of Science with a concentration in Psychology, a Master of Arts with Areas of Study in Psychology and Communications, and is currently finishing up a Doctor of Education. He has been published by the Dallas Morning News, Daily KOS, Independent Journal Review, The Blaze, and the Denton Record Chronicle.

Opinion: Dr. Jan Nisbet Exposes The Deep Abuses In The Field Of Behavior Analysis At The Judge Rotenberg Center

Senior Vice Provost for Research at the University of New Hampshire, Dr. Jan Nisbet, exposes the deep corruption at the Judge Rotenberg Center in Canton, Massachusetts. Dr. Nisbet lays out a path on how its founder, the school, and the government have not only failed the students but how they have abused them.

According to the Council of Autism Service Providers, "No. “Punishment,” as that term is used in ABA, is not bad. Unfortunately, though, that term is exploited by those who are misinformed about our practice. “Punishment” never involves retribution or harm to the recipient of services."

Anyone who has lived and Texas and wants to get licensed in a field that is under the purview of the Texas Department of Licensing and Regulation knows that it is nearly impossible to get them to take action of any kind. They are extremely slow and take forever with almost everything.

Opinion: Sanger Police Chief Waylan Rhodes Should Be Fired For Violating The Constitution And Breaking Into People's Car

Opinion: Sacred Heart Academy Is Acting Within The Bounds of Psychosis

After his team won by 88 points earlier this week, a Connecticut high school girls basketball coach was punished for one game. After a 92-4 loss to Lyman Hall on Monday night, Sacred Heart Academy reprimanded coach Jason Kirck and apologized.

30 years ago, the Isis Theatre slowly faded away and no one was sure that it would ever return. But a family with a vision brought it back in 2021. Dr. Jeff Smith and his wife Debbie Garrett-Smith made extensive efforts to revive the theatre and restore it to its original glory. They call it Downtown-Cowtown at the Isis Theatre. It appears to have become a family venture with their daughter Jamie running Guest and Media relations.

An employee at the Cedar Park Regional Medical Center has faced backlash after lying by saying that he was a Licensed Medical Doctor in Texas. Vishal Patel who serves as the Director of Operations at the medical center has claimed to hold a Doctor of Medicine from Uniwersytet Medyczny w Lublinie and to be licensed by the State of Texas but according to the medical board he is not.

In this article, I will use the ABC's of behavior analysis to evaluate each action taken during the traffic stop confrontation between Daunte Wright and Kimberly Potter. On April 11th, 2021, 26-year police veteran Kimberly Potter and a new trainee officer initiated a traffic stop of Daunte Wright. There were three antecedents to this traffic stop. 1) Illegal turn, 2) Expired Registration, and 3) illegal object on rear view mirror.

Kelly Leiter shares her heart with the world in a time when the United States is facing a true identity crisis in the school system. The system is broken and Kelly has the perfect simplistic solution. Teaching kids in a very simple way.

Lack of Leadership Intervention Puts Fort Worth Citizens In Danger

City of Fort Worth CouncilCity of Fort Worth Council. Mayor Mattie Parker took over this year for Former Mayor Betsy Price and it has been a very rocky road. To start, the 911 Dispatch Center which takes calls during emergency situations has had a low staff rate and continuing high response times. One individual said, "I waited on hold for nearly 12 minutes. That is the difference between life and death."

Beloved School Board Member Chosen For Distinction As A Master Trustee

According to the Eagle Mountain-Saginaw Independent School District, Board Trustee Dr. Marilyn Tolbert, "was recently selected by the Texas Association of School Boards (TASB) to begin the process of earning distinction as a Master Trustee. Tolbert joins 35 other trustees from across the state for the yearlong education leadership study program. This is the highest designation recognized by TASB.”

On November 13th, 2021, Yajaira Guevara took to social media to share a video of an altercation between a student and a substitute. This video was illegally obtained by her daughter, Mariah Escobar. The student has Autism and the sub assaulted the student by "intentionally or knowingly causes physical contact with another when the person knows or should reasonably believe that the other will regard the contact as offensive or provocative [1]."

Man Fleeing Officers Says I "Did Not Need" Their Services

A man who was 40-years-old was taken into custody early Friday morning after he allegedly engaged in harassment of his partner. According to police, he caused damage to her car by using a crowbar and led officers to chase him because he "did not need" their services.