Mike McKibbin is an independent journalist on Colorado's Front Range and covers Douglas County for NewsBreak. 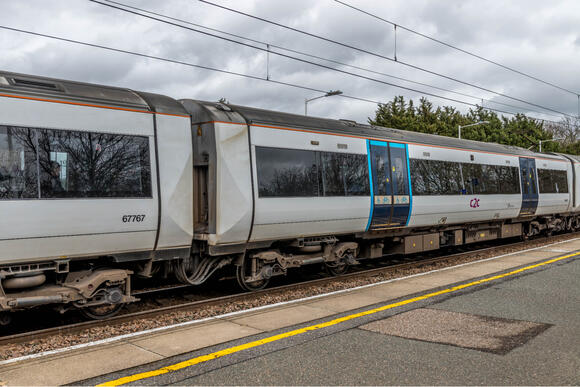 Photo by Eddie Bugajewski on Unsplash

[CASTLE PINES, COLO.] Voters across much of Colorado's Front Range could be asked to approve a sales and use tax in the next few years to help pay for a proposed multi-billion dollar, high-speed passenger rail service between Pueblo and Fort Collins.

Castle Pines City Councilmember Deborah Mulvey told her colleagues during a May 24 work session a sales tax is just one of several funding sources under study by the 17-member Front Range Passenger Rail District board of directors that began meeting this month. Mulvey is one of four members appointed by the Denver Regional Council of Governments.

The Colorado legislature created the district in 2021. It includes all or parts of 13 counties near Interstate 25 from Wyoming to New Mexico.

"The idea was to help keep the tax rate lower with a larger district," Mulvey said. "I'd say they could go to the voters in two years, maybe less."

Along with most Republican lawmakers, commissioners in Douglas and El Paso counties opposed creating the district due to the potential cost of the railway and the possible use of eminent domain to acquire property for a route. A designted route is also pending before the board.

One state report estimated initial rail service could cost $2 billion. But when considering costs for a total build-out along a dedicated double-track, the study estimated final costs could reach $14 billion.

Mulvey said one discussion is whether to link the line to Amtrak's Southwest Chief line further south. The passenger rail district replaced the Southwest Chief & Front Range Passenger Rail Commission, which studied the potential of a north-south rail line.

Along with sales and use taxes, Mulvey said the district could form improvement districts — with approval from property owners within a 2-mile radius — to help recover costs. The district could also issue bonds.

"There is already financing in place through grants and existing legislation that can help start the process," Mulvey added.

She plans to push the board to seek other existing funding sources at all levels of government and partners. Phasing the project could help keep costs down.

"I"m the only representative from the southwest metro region, so I'm going to have very open ears to what the region wants," Mulvey said. "I'm going to really press them to hold outreach and education efforts in our areas because this will really impact us."

Mulvey said the rail service would likely travel at up to 60 mph.

Mike McKibbin is an independent journalist on Colorado's Front Range and covers Douglas County for NewsBreak.

Volunteer wants to use experience to serve DougCo in Colorado House

[DOUGLAS COUNTY, COLO.] Deciding to seek office was a "natural evolution" for one of two Republican candidates for state House District 43 on the June 28 primary election ballot.

[DOUGLAS COUNTY, COLO.] Private property owners in unincorporated Douglas County could get help — including money — to mitigate their wildfire risk under a proposal presented Monday to the county commissioners.

[DOUGLAS COUNTY, COLO.] The Castle Pines City Council took the first step toward forming a regional economic development collaborative in Douglas County. On May 24, the council became the first to approve a memorandum of understanding between the city, the county and 10 other entities:

[CASTLE PINES, COLO.] The City of Castle Pines has added its name to the growing number of Colorado municipalities to adopt a wildfire mitigation plan following the devastating Marshall fire in Boulder County at the end of December.

[DOUGLAS COUNTY, COLO.] The Douglas County Commissioners have found a controversial plan to use water from the San Luis Valley to help support the county's growth does not qualify for federal pass-through funds.

[CASTLE ROCK, COLO.] Whether elected, reelected or appointed, the next Castle Rock town council members will earn nearly twice as much as those already on the council. Current council members unanimously approved the first salary increase for local officials in 14 years at Tuesday night's meeting.