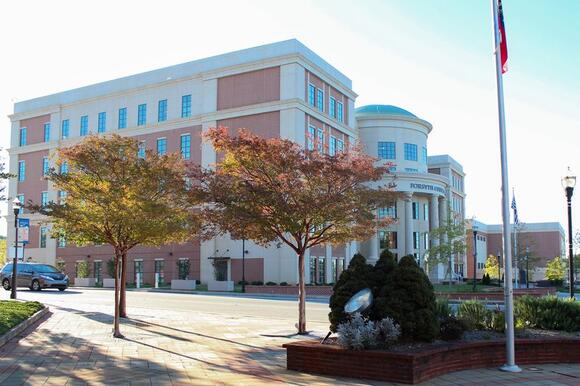 The left turn lane is expected to be blocked throughout the construction process. The County expects to reopen it later this year, weather permitting. 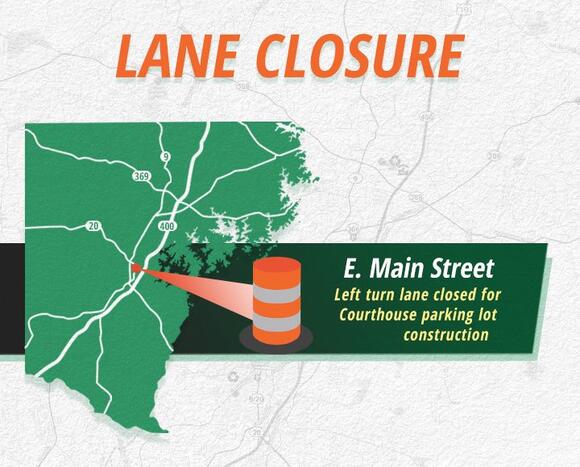 Forsyth County transportation officials also have a new update on the ongoing major construction project at the SR 369 and 400 interchange. 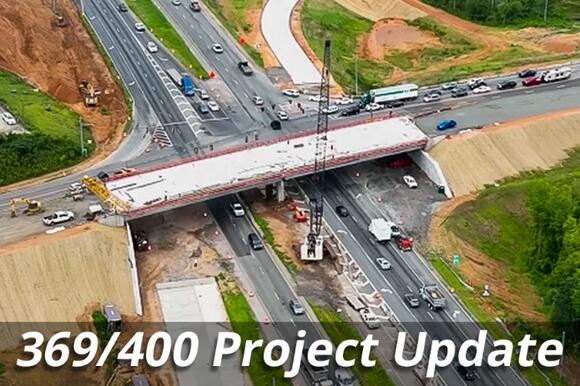 Officials have just announced that the east and west lanes of SR 369 are expected to move onto the new bridge by the end of this year.

Paving for the approach ramps to the bridge is expected to begin in early fall, and the interchange is scheduled to be completed in early 2024, weather permitting.

This massive road construction project will widen SR 369 for a two-to-three mile stretch from just west of SR 9 to slightly east of SR 306. When completed, the existing two lane road will have two lanes in each direction with a 20-foot raised median. A 10-foot multi-use trail will be added along the south side of the road while five-foot sidewalks will be installed on the north side of SR 369.

The project is also creating a new partial cloverleaf interchange at the existing intersection of SR 369 and US 19/State Road 400.

Forsyth County has posted a new "On the Move” video explaining the latest progress in the project. It will post more videos as it has updates on road construction projects.

(Forsyth County, GA) Delays are expected all week on SR 400 as construction crews work along the highway in the northern section of Forsyth County. The northbound right traffic lane was closed on Monday, September 26 from SR 369 to Martin Road to begin working on the shoulder along 400 and land restriping. The lane will remain closed for construction between the hours of 9 a.m. and 4 p.m.

(Photo/Oscarville: Below the Surface) (Forsyth County, GA) Lisa Crosby has been teaching Georgia social studies classes to middle and high school students in North Georgia for more than two decades, but she didn’t learn the history of the town of Oscarville in any textbooks.

How safe do you feel in Forsyth County? Sheriff’s Office wants feedback on job performance

Tourist spending on the rise in Forsyth County

Father and son hike to the Indian Seats at the top of Sawnee Mountain(Photo/Discover FoCo) (Forsyth County, GA) More tourists are heading to Forsyth County, according to new information released by Discover FoCo, the county’s Destination Marketing Organization. The group also reports that Forsyth County is now ranked fifth out of the 34 counties that make up the North Georgia travel region.

(Forsyth County, GA) Drivers heading through northern parts of Forsyth County will need some extra patience this week as road construction is forcing one lane to close. The right traffic lane on SR 400 northbound from exit 17 (Keith Bridge Rd/SR 306) to Martin Road will be closed from 9 a.m. until 4 p.m. this week, weather permitting. The lane closure began on Saturday, September 17 and is expected to last for a week, except on Sunday.

(Photo/Oscarville: Below the Surface) (Forsyth County, GA) The fictional series inspired by the true story of the town of Oscarville is one step closer to becoming a reality. On Thursday, September 15, the official trailer for the first episode of “Oscarville: Below the Surface” was released. The trailer can be viewed on the official website, Facebook, and YouTube accounts for the series.

(Forsyth County, GA) With the November 8, 2022 General Election and Special Election less than two months away, the push is on in Forsyth County to recruit poll workers. The Voter Registrations & Elections Office has scheduled several orientation sessions for Forsyth County residents interested in learning more about what a poll worker does.

(Forsyth County, GA) How did an actress from South Carolina come to star in a television series based on the Black town submerged in Lake Lanier? It began with a Facebook post.

(Forsyth County, GA) Forsyth County residents can receive the new bivalent COVID-19 booster at the Department of Public Health, as shipments of the vaccine have been arriving in Georgia this week.

(Forsyth County, GA) More details have been released about Stacey Abrams’ (D) upcoming campaign stop in Forsyth County. Stacey Abrams will be the featured guest at the One Georgia Assembly on Sunday, September 18 at the FoCAL Center(Photo/Stacey Abram's Facebook page)

(Photo/Four Scyths Haunted Attraction on Facebook) (Forsyth County, GA) Clues are being planted around Forsyth County this month, and the race is on to find them. But contestants are not tracking down typical scavenger hunt items like a blue pen or empty paper towel tube; they are on the hunt for envelopes containing free tickets to the upcoming House of Four Scyths Haunted Attraction.

The new Dunkin' will open Friday, September 2 at 5290 Matt Hwy(Photo/Dunkin') (Forsyth County, GA) Dunkin has a big prize in store for the first 200 guests who walk through the doors of its 200th location in metro Atlanta - free coffee for a year.

While free lunch for all Forsyth County students is over, some may still qualify

(Forsyth County, GA) Forsyth County Schools is hoping to clear up some confusion regarding school lunches. Frequent posts on social media may be leading some residents to believe free lunch is no longer available to those in need. In fact, the national Free and Reduced Lunch program was never eliminated. What has changed this year is the US Department of Agriculture (USDA) has ended the nationwide program that provided free lunch to all students across the country for the past two school years.