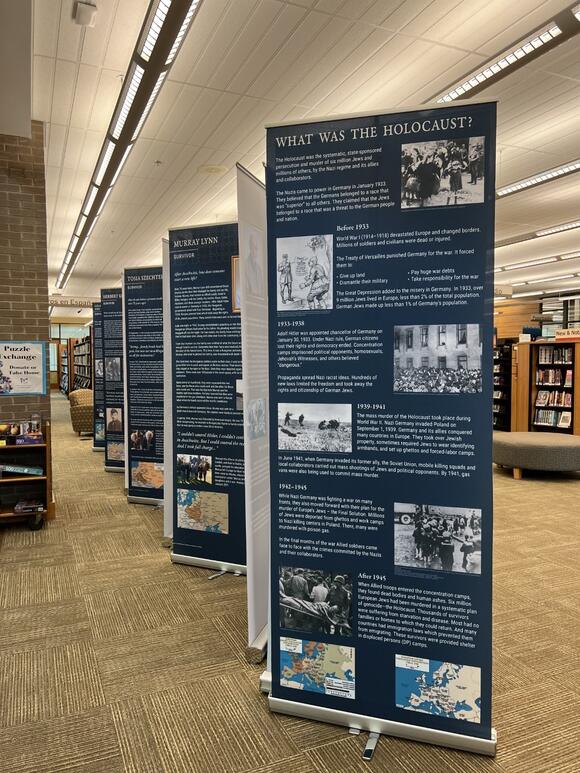 "Georgia's Response to the Holocaust: Survivors and Liberators" is on display at the Post Road Library at 5010 Post Road(Photo/Michelle Hall)

(Forsyth County, GA) The Post Road branch of the Forsyth County Public Library (FCPL) is currently the home to an exhibit honoring some of the survivors and rescuers of the Holocaust.

"Georgia's Response to the Holocaust: Survivors and Liberators" is a touring exhibit from the Georgia Commission on the Holocaust in partnership with the Georgia Public Library Service. The exhibit is a display of banners that feature stories of couragious Holocaust survivors and liberators who were from Georgia or later became residents. 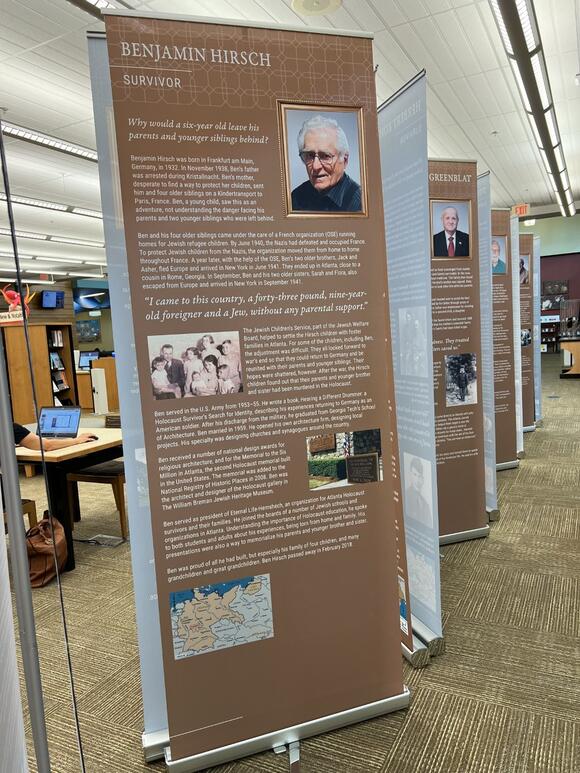 The exhibit is one of three Holocaust memorials traveling throughout Georgia to 88 public libraries over the course of three years.

“Opportunities like this are available on a first come, first served basis and get filled up quickly so we jumped at the chance to sign up to host this one,” said Leslie Marinelli, FCPL communications manager. “As a library system, we love hosting exhibits from other organizations because they attract people to our libraries who might not otherwise visit.”

So well done and very sad. This was an amazing exhibit. It was very informational. I will suggest to my husband, son, and daughter to come see it." - FCPL patron

Throughout World War II, especially from 1941 through 1945, more than six million Jews were killed as the German Nazis attempted to cleanse Europe of the Jewish people. The Holocaust, as it became known, ended when the prisoners in concentration camps were liberated. Many of those liberators were American soldiers.

“One of the enduring lessons of the Holocaust is that we should never forget it,” said Kim Ottesen, FCPL programming manager. “We think our community will be interested to learn about Georgians who helped liberate Holocaust survivors, as well as the survivors who settled in Georgia.” 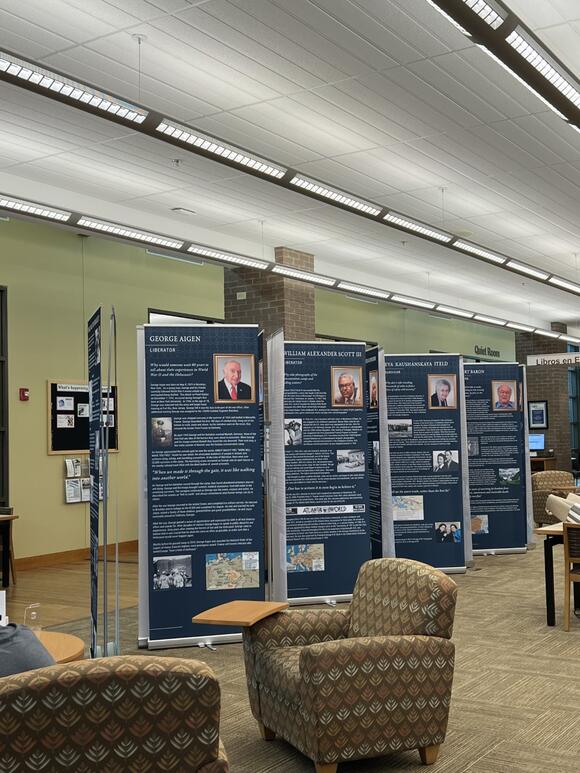 The exhibit is located at the front of the library's main room and will be on display until August 22, 2022(Photo/Michelle Hall)

Marinelli believes this local perspective will make the “horrors of the Holocaust” more tangible for all in Forsyth County who go see the exhibit.

“I hope people will take the time to read these stories and make their own connections to the brave Georgia neighbors who survived or helped to end this catastrophic period of history,” Marinelli said.

“Georgia's Response to the Holocaust: Survivors and Liberators” will be on display at the Post Road Library until August 22, 2022.

We are Jewish and can't tell you enough how amazing it is that this exhibit is at our local library! There is not a big Jewish community here so it is surprising and touching that Post Road Library was chosen as a destination!" - FCPL patron

Another Holocaust event is also planned at the Post Road Library. “It Started with Words” - a presentation by the Museum of History and Holocaust Education - will be held on Thursday, August 18 at 6:30 p.m.

If you have a news tip in Forsyth County, please email michelle.hall@newsbreak.com

New car shopping? Why the sticker price in Forsyth County might not be close to what you’ll ultimately pay

(Forsyth County, GA) It’s no secret car dealers are looking to make a profit, oftentimes selling cars for way above the recommended sticker price. But as the demand for new cars still outweighs the supply due to the microchip shortage that started during the pandemic, dealerships are blaming the market for their markups.

The USDA free lunch program, which began during the COVID-19 pandemic, has expired.(Photo/Getty Images) (Forsyth County, GA) When the 2022-23 school year starts this Thursday, August 4, in Forsyth County, parents will need to plan on whether their children will be brown bagging or buying their lunch.

(Forsyth County, GA) The Humane Society of the United States has honored the Forsyth County Board of Commissioners (BOC) with the Humane Law Maker Award. The award was presented during the BOC meeting on Thursday, July 21.

(Forsyth County, GA) While the newest variant of COVID-19 is said to be the most contagious yet, the transmission level in Forsyth County remains low. (Image/Georgia Department of Public Health)

Swim Atlanta Midway (5059 Post Road) was the site of a chlorine leak on June 15 that made nearly 20 children sick(Photo/Michelle Hall) (Forsyth County, GA) A hazardous materials emergency sickened 20 young children and adults at the Swim Atlanta pool in the Midway Family Festival on June 15, just as the evening commute was picking up on Post Road.

Headed outdoors in Georgia this summer? Watch out for another tick disease

(Forsyth County, GA) The summer is off to a humid and rainy start - perfect conditions for ticks to come out and hang onto the fast-growing blades of grass. For years those who enjoy spending time outdoors have had to worry about getting infectious diseases from ticks like Lyme Disease and Rocky Mountain Spotted Fever. And now residents in Georgia have another potentially-deadly tick-borne illness to watch out for: the Heartland Virus.Dangers of tick seasonAccording to the Georgia Department of Public Health, ticks are most active from April through September and live in grassy, brushy or wooded areas.“Lonestar tick is our most common tick,” said University of Georgia entomologist Elmer Gray. “They are everywhere that there’s deer. Any place deer are around your yard, edges, there's going to be ticks.”

Firefighters Michael and Levi Sierra(Photo/Levi Sierra) (Forsyth County, GA) For new firefighter Levi Sierra, May 23 was a day he’s been waiting for - his first day on the job.

Why seniors say Forsyth County is a great place to retire

Seniors taking part in an exercise class at the Hearthstone Room at Central Park(Photo/Forsyth County Senior Services) (Forsyth County, GA) In the last several years, it may seem like more and more senior living neighborhoods are popping up around Forsyth County. From active adult communities to assisted living centers, it appears Forsyth County is becoming known for being a great place to retire.

(Michael Morton/M Photo + Video) (Forsyth County, GA) The lunar eclipse late Sunday night, May 15, was a sight to behold. A Forsyth County photographer shared the images he took for anyone who missed it, or who wanted to see it again.

Still a seller's market for real estate in Forsyth County(Photo/Getty Images) (Forsyth County, GA) It’s no secret the Forsyth County housing market has skyrocketed in the past couple years. List prices are often just a suggestion and bidding wars start as soon as a “for sale” sign appears in the front yard. Historically, late spring and early summer are hot times to buy a house and so far, 2022 is proving to be on track. The difference this year is there's not a lot to choose from.

FoCo voters can check wait times before heading to the polls