Professional writer and journalist with concentration in data analysis. I specialize in interpreting data to give you unbiased, understandable information related to the state of California. 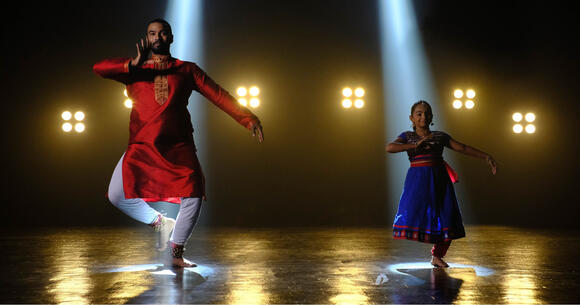 Photo by nik radzi on Unsplash

Today, my friend Brittany and I went to downtown to sample our first Bollywood dance class. I know, I know. I have been living under a rock if I have never taken a Bollywood class. But I haven't. Well, I hadn't. New York City is the home to so many great Bollywood studios and I'm so glad that I finally got around to giving it a try. It was an absolute blast.

Brittany and I entered the dance studios around 5:45pm and were pleasantly surprised that the place was veritably quiet. We signed up at the door (it was assumed that we had already paid via Groupon, but nobody checked anyway) and entered the large mirrored studio. I looked around as the students filed in. I was surprised to see that there were no dancer-looking people in it. Just a bunch of normal-looking happy people. I was immediately relieved. I was terrified that I would be transported to a background package in a New York City-based episode of So You Think You Can Dance when I know nothing about the style. I breathed a little easier.

Our beautiful and petite teacher walked to the front of the class and introduced herself. The class we took was Bollywood Basics and is recommended to all newcomers to Bollywood dance. Our teacher, explained that we would do a quick warm-up and then we would learn an entire dance by the end of the class. She encouraged us to ask questions, leave the room and come back, and participate as much as we desired. She even smiled and said that we were welcome to chat while we danced if we wanted. Okay, I got it, she wanted us to have fun.

Then she turned on some Indian club-like music with a driving beat and started with a step touch. We tried various easy movements during the warm-up, mostly dance steps with specific hand movements, but it was at least a little fun. Our teacher was funny and charming and made everyone young, old, big, and small in the room feel comfortable,

"Feel free to add hips and shoulders to any movements if you want. In Bollywood, the more hips and shoulders, the better!" She explained that many of the steps we were learning were derived from classical Indian dances that were danced around harvest time, so many looked like harvesting plants or stamping soil, etc. I realized that there was much more to this Indian dance stuff than met the eye.

Our teacher, obviously, knew much more than she was letting on, but managed to just hint at details of the dance and focused more on the having fun part. It helped that the technique of this genre of dance lent itself to being easily danced by a layperson. There were no New York City Rockettes-style pointed toes, piroettes, or high legs, just bouncing, hip shaking, and expressive hands.

I could see where a dancer advanced in this technique could do much more than we were attempting in the class, but the movement was easy enough for most people to catch on and interesting enough to keep me engaged for an hour. Our routine (which we did, in fact, finish before the end of class) was politely sassy and actually a bit of an oblique workout.

Our teacher translated the words of the song as we danced and laughed as we did a "throwing heart" movement, "women are always breaking their lover's hearts in Bollywood dance." The dancers in the room giggled and threw their imaginary lovers' hearts to the floor with an arm flick and a hip shake.

We finished our dance and filed out of the room to the changing room where I heard murmurs of "that was fun" and "where's the next class?" I listened and realized I had enjoyed my introduction to Bollywood dance. It's a rare and wonderful person that up and decides to take an Indian dance class instead of just putting in an hour on the treadmill or the elliptical. I was inspired by the courage of my classmates.

Our teacher suggested some favorite Bollywood films to rent while a woman in her late fifties with dreadlocks put on her Birkenstocks (with socks!) and talked about the dance steps with a thin, hunched mousy looking girl of about twenty. We had all shared a lovely experience. It wasn't hard, it wasn't complex, and I will definitely not be adding Indian dance as a special skill on my resume. That wasn't the point, though. I had a fun time. That was. The next time you're looking for a fun workout in New York City, I highly recommend getting your groove on in a Bollywood dance class.

Professional writer and journalist with concentration in data analysis. I specialize in interpreting data to give you unbiased, understandable information related to the state of California.

It has been a tough year for so many. Companies based in Los Angeles (and, thus, their employees) have been forced to creatively pivot in the face of a relentless onslaught of changes and obstacles.

Four places to get a quick, quality holiday haircut in Los Angeles

It's time to sit around the table gobbling turkey with loved ones. But, if you're still working from home, you might be rocking some overgrown pandemic hair. In the interest of making the best impression around at your festive fall events, here are four places to get a good and quick holiday haircut in the county of Los Angeles.

California residents expect more from their employers in 2022

Thursday, November 18th marks the first day of a three-day Los Angeles memorial titled "Strength + Love" to celebrate those who supported the city and to remember those who passed away due to the Covid-19 pandemic.

California's return to the office might be more expensive than expected

One third of Californians returning to the office expect to spend more money than they did when working from home during Covid-19 office closures, according to the summer 2021 MassMutual Consumer Spending & Saving Quarterly Index. And almost one quarter of the people polled who are returning to work are concerned about the increase in expenses stemming from their return to the office.

California residents are "revenge shopping" in 2021

Some call it "revenge shopping." After more than a year of decreased pandemic spending on travel, clothing, and dining out, shoppers in California are ready to spend their money. And so far this holiday season, they are definitely spending their hard-earned money. And a lot of it.

More California girls have contemplated suicide than boys, according to the California Healthy Kids Survey

The California Healthy Kids Survey (CHKS) is a confidential series of questions answered by students in the fifth, seventh, ninth, and. eleventh grades in the state of California. The anonymous survey collects data on students' health risks, their everyday behaviors, school violence, youth resilience, school safety, and the overall health and wellness of these students, amongst other related data. This data is used to create future plans to improve California schools and create resources to assist students that are struggling.

California has the largest number of LGBT adults, along with Texas, Florida, and New York

The University of California Los Angeles' Williams Institute released an overview of estimated numbers of people self-identifying as lesbian, gay, bisexual, or transgender that was derived from the Gallup Daily Tracking Survey. This survey tracks 1,000 adults in the United States each day for 350 days per year - examining "extensive demographic breaks and cross-tabulations" of 175,000 people per year.

A 2020 report issued by the United States Census Bureau shows that the state of California gained 2.2 million more residents between 2010 and 2020. And, according to information obtained from census participants, the population of 39,538,223 residents self-identified as more racially diverse than they did in 2010.

California's mass exodus is headed largely to one state

They're calling it the "mass exodus." Families and individuals who lived in large cities before the Covid-19 pandemic are rumored to be headed in large numbers outside the cities. While the term "mass exodus" does not reflect the more subtle U.S. Census data, there is a trend that has been seen in the migration of Californians.

The 2021 University of Southern California Casden Spring State of the Market Forecast paints a dismal picture for the future of rent prices in 2022. The report, which is issued annually, "describes trends in the multi-family residential real estate market and analyzes relationships among market demand, supply, prices, and policies." And this year's report shows sizable rent increases in many areas in the Southern California area.

Surge of applications to California universities may extend to 2022

Los Angeles’s new ordinance that patrons of restaurants, gyms, bars, and salons show proof of their full vaccination Covid-19 status went into effect on Monday of this week, but many Los Angeles residents are expressing their confusion as to how, where, and when these new rules will be enforced.

High cost of living in Los Angeles contributes to growing homeless population, here's how to help

According to the U.S. News and World Report, the city of Los Angeles is not only the area in the state of California with the largest number of homeless residents, but it is also has the second largest homeless population in the country (behind New York City).

2021 was the second driest year in the history of the state of California and the Metropolitan Water District of Southern California is warning residents that it's time to take action. They issued a statement this week that urges California residents to begin to voluntarily reduce the amount of water they use in their daily activities so that more extreme measures do not need to be taken in the future.

Yamashiro Restaurant overlooks Los Angeles' Hollywood boulevard from its perch on a a hill 250 feet above. The ornately crafted building, which took hundreds of artisans to create, was completed in 1911 and commissioned by Eugene and Adolph Bernheimer to display their collection of fine Asian art. Today, Yamashiro has reopened after a recent closure, has a new and improved menu for trendy Los Angeles diners, and…it still has a few ghosts.

Donna Heinel, the former USC senior associate athletic director in Los Angeles, agreed to a plea deal this week after being accused of helping the children of wealthy and powerful people across the country get into college by posing as fake sports recruits. The 60-year-old Heinel faces up to 46 months in prison after what people are calling the "Operation Varsity Blues" scandal.

During prohibition, Americans created many inventive ways to continue to imbibe alcohol. After the eighteenth amendment made drinking alcohol illegal from 1920 to 1933, Los Angeles residents decided to keep the party going…underground. Los Angeles' subterranean spaces quickly became makeshift speakeasies and places for other nefarious activities. Today, adventurous explorers can find some of these spooky old tunnels located under Downtown Los Angeles.

This week, Amazon placed pop-up toy shops in Los Angeles County - one in the Glendale Galleria and one on Melrose Avenue in West Hollywood. These shops, which opened on Tuesday, November 2nd, will stay open through Monday, November 22nd and they will feature more than 100 toys from Hasbro, LEGO, Disney, and more. The company stated that they understand shoppers want the in-person holiday shopping experience, complete with festive music and physically picking up and choosing items.