Cubans in Miami send medicines to the Island

In order to offer a breath of life to dozens of island residents, groups of Cubans in Miami created a humanitarian aid corridor.

On this occasion, they sent drugs such as cephalexin, furosemide and doxycillin, among others.

However, the members of the aid group allege that the list of medicines that thousands of Cubans need on the island would be endless. Unfortunately, in Cuba they are scarce or do not exist.

Yaquelin Abreu, a member of the group “Todos Somos Placetas”, says: “What is happening in Cuba right now is inhuman,” reported Telemundo51.

Sahidy Mata: member of the group “Todos por Cienfuegos”, says: “the objective of sending things hand in hand is so that we do not lose anything”.

Rudy Acosta, from the CU7 Christian ministry, says: “we have daily communication with these pastors, who are in the field in the villages working with these people”.

"First of all, we focused on the fight against COVID, lowering the numbers so that Cienfuegos returned to normality as soon as possible," says Mata.

"Days of many gravediggers calling us and telling us that they could not overwork, it was very sad," says Abreu. And he adds: "That's when we really said we have to get together and do something fast and that's when the oxygen shortage started."

With the financial support of the more than 28,000 followers of the group Todos Somos Placetas, Yaquelin says that 2 oxygen respirators were purchased and sent to Cuba, which are still in service today.

In Cuba, collaborators such as Dr. Abdiel Rodríguez, a specialist in intensive and emergency medicine, receive shipments and try to meet the needs of the people. 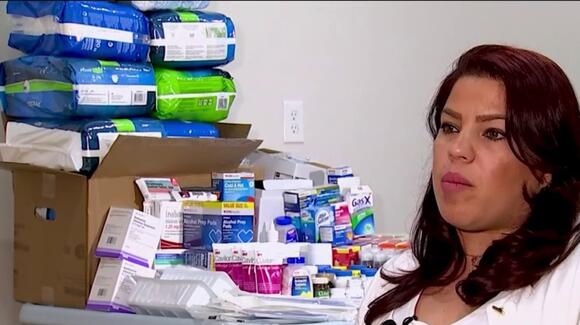 "It seems to me that no one better than a doctor who is suffering together with the patients, can manage the resources that he has in his hands," says Dr. Rodríguez.

“Right now we are sending people across Canada, the volunteers. We have not been lucky enough to find a cheap passage ”, says Mata.

And it is that finding a balance between the purchase of medicines and the cost of tickets, sometimes hinders their mission of solidarity.

"What we do is that we sell, unfortunately, a part of the luggage and we send half of the donations and half of what we sell," says Mata.

"A treatment with an antibiotic like Rosefine was costing him around 30,000 Cuban pesos, impossible to pay, they don't have to eat, food has gone up in price outrageously," says Acosta.

To these shortcomings, the CU7 Christian Ministry missionaries, active in sending aid since 2017, try to respond, also by sending them hand in hand.

"It is much more difficult, it is much more complicated, expensive but our premise has been that none of the aid we send goes through any channel of the Cuban government, and we know that many of them may have their eyes on us", Acosta says.

With an increasingly deteriorated health infrastructure and a deficit of medicines that has worsened for days, for Cubans, this humanitarian aid that comes from abroad is a hope, a sigh of life that the regime unfortunately rejects.

USA: Couple steals COVID-19 donations and abandons their children with a letter

The couple left a written note for the children, ages 13, 15 and 16. The fugitives go by the names of Richard Ayvazyan and his wife, Marietta Terabelian, who were facing jail for mass fraud, being found guilty of conspiracy to commit bank fraud, wire fraud and money laundering of covid-19 aid. A couple of months later, these husbands decided to cut off their electronic tracking bracelets and fled their California home, abandoning their three teenage children.

Masks will be optional in Orange County schools

The masks are optional in schools in Orange County, as reported by school authorities. The students no longer need a form of voluntary exclusion from the representative to be exempt from the use of the mask in the classroom.

$ 3.5 million in cryptocurrency seized by the IRS in a year

The agency indicated that digital currency has become the most dominant form of payments in criminal cases. This Saturday the Internal Revenue Service (IRS, for its acronym in English), reported that during a year it seized more than $ 3.5 million in cryptocurrencies.

To accompany Thanksgiving, all the love, flavor and aroma of the fall season! Try this delicious pumpkin pasta for lunch, dinner, or as a side to a protein. If you prefer to do it without the mushrooms, you can add all the herbs last, when mixing the pasta with the sauce. You can also add sausage or serrano ham. It is irresistible and easy to prepare. Get inspired with gratitude and prepare your version!

From February 22 to 27, the Island Gardens Club & Marina of Florida will be the imposing venue for the start of the most international season in the history of the World Padel Tour, with the celebration of the Miami Padel Open.

These are the top winners of the Latin Grammy 2021

The Latin Gammy returned to Las Vegas in its 22nd edition, with the theme "Rediscovering life through music" after having performed in Miami without an audience and without special awards last year due to the pandemic. The tribute to Rubén Blades as Person of the Year and the return of Christina Aguilera to the event after two decades are among the most anticipated performances.

Partial lunar eclipse: this is how the phenomenon was seen in the US

The longest partial lunar eclipse in almost 600 years was recorded at dawn on Friday, November 19, and was seen in almost all of Latin America and North America. In this way, astronomy lovers had something to enjoy during the early hours of Friday, since the lunar eclipse could be seen in the United States.

This Friday, US President Joe Biden will undergo his first routine medical examination as US president. The check-up will be done at Walter Reed Military Hospital in Washington.

The suspect demanded money from a teller and left with an undisclosed sum of cash. Federal authorities are seeking the help of the population in the search for a man who robbed a bank in southwest Miami-Dade.

Rick Torcise is a 61-year-old farmer and businessman serving as a youth leader for the church in Homestead and now facing a Miami-Dade County child, records show. The 17-year-old met Rick Torcise at the New Beginnings Christian Fellowship of Homestead . Torcise hired him to work out of his home in the Redland farm area, police said.

A bicyclist was killed by a bus in Florida

The bill (SB 988), introduced by Sen. Ileana Garcia, a Miami Republican, comes after many centers stopped or limited visits during the COVID-19 pandemic. The bill includes a legislative finding “that it is in the best interest of the state and its residents that patients and residents of health care facilities are allowed to visit visitors of their choice during their hospitalization or residential treatment. ”Reported Orlando Weekly.

Alert! Florida is one of the states with the most puppy scams in the US

Florida ranks high on the list published by Veterinarians.org of the states in the country with the most puppy scams. The report indicates that from January 1, 2021 to October 31, 2021, there were 165% more puppy scams in the US, reported Diario las Américas.

A 14-year-old girl who shot several police officers with guns found in a home she broke into with another 12-year-old after escaping from a home for minors in Volusia County in northeast Florida, will be tried as an adult .

The U.S. Food and Drug Administration (FDA) authorized the emergency use Friday of the Moderna and Pfizer COVID-19 booster vaccines for all adults. The Moderna booster had received authorization from the federal government on October 20 for its use in people over 65 years of age and high-risk people with pre-existing conditions, reported Telemundo51.

The Miami Heat got their fourth win in a row

Once again Jimmy Butler was a fundamental factor for the Miami Heat to win for the second consecutive night at home. This time their victims were the Washington Wizards whom they beat with a score of 112 to 97.

Flooding from heavy rains on Thursday caused Miami drivers a living nightmare. Miami Heat fans struggled to get to the FTX Arena to watch their home team take on the Washington Wizards.