Recently, 433 posted a pretty hilarious eFootball video on Twitter that literally made me LMAO. The Saudi Arabia Public Investment Fund, which bought Newcastle United, a British soccer club in the Premier League, is worth around $320B. That's a lot of money, huh?

Its owner, Mohammed bin Salman Al Saud, colloquially known as MBS, is a Saudi Arabian politician who is the crown prince, deputy prime minister, and minister of defense of Saudi Arabia. He also serves as the chairman of the Council of Economic and Development Affairs and chairman of the Council of Political and Security Affairs. With that much money and influence, Newcastle United is now able to sign as many soccer stars as they want. But M'bappe and Haaland? Thanos, Iron Man, and Hulk? That's insane, man.

eFootball is a football simulation video game developed and published by Konami. It is a free-to-play game after being completely rebranded from the original Pro Evolution Soccer (known as Winning Eleven in Japan) series to the eFootball series. The game's first season, entitled eFootball 2022, was released on 30 September 2021. At launch, eFootball was panned by critics for its graphics, controls, and lack of content.

Konami decided to completely rebrand the Pro Evolution Soccer series with a free-to-play edition this year and it was met with a furious response. Many believe the game wasn't finished at launch and Konami quickly got to work on Version 1.0.0, which would bring major fixes. However, a statement published in the early hours of this morning has indicated that won't be happening.

The official eFootball Twitter account has announced that Neymar Jr has become the newest ambassador for the eFootball series. 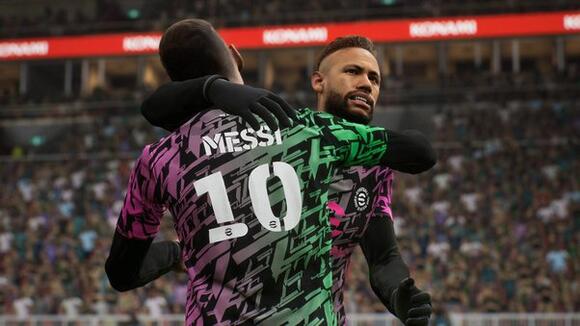 eFootball will be available worldwide first on PlayStation5, PlayStation4, Xbox Series X|S, Xbox One, Windows 10, and PC Steam. It will then become available on iOS and Android soon after. 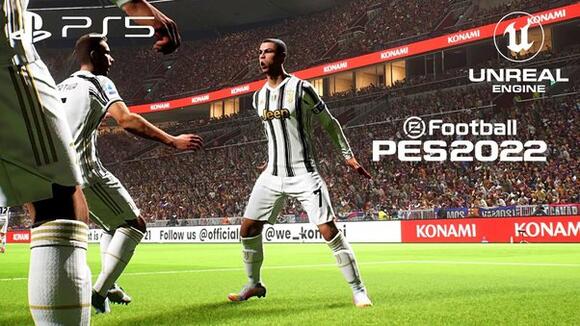 As you might know, Konami has opted to switch engine for PES 2022, moving to Epic's Unreal.

In an interview with Konami's Seitaro Kimura, producer on the eFootball PES series, he pointed to a few examples of how Unreal has already helped the development process.

One specific example is that with Unreal Engine, designers can take on various tasks without programmers’ help by using Blueprint.

By doing so, we believe that we can improve the production speed, improve the skills of individual designers, and receive many other benefits.

Another aspect that will be greatly improved with Unreal Engine is the graphics. 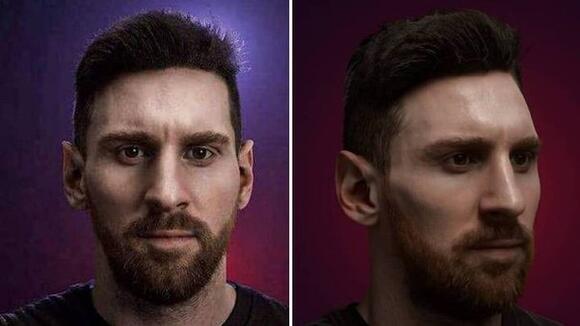 The image above shows how Messi could look in PES 2022 with Unreal Engine - practically the same as in real life!

Fans are very excited at the prospect of having near-perfect in-game features for the top players around the world.

Fans couldn't be more excited for Konami's next release, with PES 2022 set to arrive on a brand new engine and with loads of new licensed teams!

Konami said that PES 2022 will bring “staggering improvements to all areas of the game”, including more realistic player models and animations, enhanced physics, and photorealistic visuals.

There are “large updates” in the works for both MyClub and Master League as well, Konami added.

As things stand, Konami still has deals in place with plenty of footballing heavyweights.

The flagship club is Juventus, which does not appear in any other game thanks to their agreement with Konami.

Barcelona and Bayern Munich have also been strong flag bearers for PES over the years, with both club's stadiums - the Nou Camp and Allianz Arena, exclusive to PES 2021.

PES fans will be now be wondering, will eFootball have the rights to the same clubs as PES?

Well, I think so. With Konami recently adding Italian clubs Atalanta and Napoli to their roster, we shouldn't see too much change in the licenses.

Well, are you disappointed in the new eFootball installment? Or are you still looking forward to the 1.0.0 patch?

"I have many things to tell you and very little time… I come from a universe parallel to yours. My world is desperately in need of your help. Only YOU can save us." Besides the new covid nickname... this game has unique features from his time. Isn't bad at all. You'll just adapt, and the game will reward you with an amazing history. Come on nomad, let's walk together until we find our paradise.

Why Is Valorant Seemingly Easier than Any Other FPS Game?

This Thanksgiving, Play Halo Infinite with Your Friends and Family!

Update: Halo Infinite has been released earlier than expected! Just check out how many players are rushing into this Season 1 for the new free-to-play installment!. I’m in dilemma as of Halo Infinite. I am a huge Halo fan, in fact, hardcore one since I was a little kid. Having gr up with the franchise, I love all games, except for Halo 5 Guardians which kinda lacks the glamor, which its predecessors, of course, do exhibit.

How to Fix Bugs in GTA Trilogy Definitive Edition?

Grand Theft Auto: The Trilogy – The Definitive Edition is a compilation of three action-adventure games in the Grand Theft Auto series: Grand Theft Auto III (2001), Grand Theft Auto: Vice City (2002), and Grand Theft Auto: San Andreas (2004). It was developed by Grove Street Games and published by Rockstar Games. All three games are remastered, with visual enhancements and gameplay upgrades. It was released on Microsoft Windows, Nintendo Switch, PlayStation 4, PlayStation 5, Xbox One, and Xbox Series X/S on 11 November 2021, and is scheduled for release on Android and iOS devices in the first half of 2022. The games will feature "across-the-board upgrades including graphical improvements and modern gameplay enhancements for all three titles, while still maintaining the classic look and feel of the originals".

What to Expect from Final Fantasy V - Pixel Remaster?

Final Fantasy V is a fantasy role-playing video game developed and published by Square in 1992. It is the fifth main installment of the Final Fantasy series. The game first appeared only in Japan on Nintendo's Super Famicom.

In our previous article, we introduced Netflix's 10 Rumored Mobile Games on Android and IOS. Now that Netflix Gaming is a thing on both platforms, its streaming service is dedicated to growing its library of games way beyond that. The company is announcing new titles that subscribers can look forward to. One of the new games heading our way is a League of Legends spin-off by the developers behind the Bit. Trip series, Choice Provisions. "Hextech Mayhem: A League of Legends Story", the new game on Netflix, seems to continue the studio’s rhythm lineage and looks to merge a Bomberman gameplay style with music and a lot of interesting styles.

What Exactly Is Facebook's Metaverse?

Want to visit exotic places… just at your home like what you see in the movie Ready Player One? Through Metaverse technology it is possible. It is the same technology which Facebook is working on: before all, let's understand what metaverse is:

GOG.com is a digital distribution platform for video games and films. It is operated by GOG sp. z o.o., a wholly-owned subsidiary of CD Projekt based in Warsaw, Poland. GOG.com delivers DRM-free video games through its digital platform for Microsoft Windows, macOS, and Linux.

How to Be Awesome at Fortnite?

I still hear the RPG Jack O’ Lantern’s laugh in my nightmares. I’ve been playing Fortnite Battle Royale for almost a year now. Since the release of its game, I’ve earned over 730 wins with 11,000 kills. I have plenty of other stats that confirm my credibility, but I’m here to offer you advice on getting better.

We’re all enthusiastic about games, which means that we’re hawk-eyed when looking for the Steam Black Friday deals of 2021. We’re bound to see some excellent deals come forward on some of your favorite games from 2021 and before, with many of them hitting historical lows on Valve’s absolutely huge platform. This means that we’re going to go through everything that you can expect from the Steam Black Friday deals of 2021, including AAA, Indie, VR games, and many, many more. We could see thousands of games on sale on Steam this Black Friday, but no worries, we’ve got you covered.

Netflix's Arcane Gets 9.4/10 IMDB Rating in Celebration of League of Legends Anniversary

IMDB: 9.4/10https://www.imdb.com/title/tt11126994/?ref_=ext_shr_lnk. Vi bounces her leg when she’s nervous. It’s something she does throughout the first four episodes of Arcane, the Netflix series based on League of Legends lore, and it’s a tiny yet charming habit. Vi’s leg shakes up and down with anxious anger as she argues with her friend from a squashed armchair in their makeshift lair; later, her knee bounces as she sits alone in a dark room, facing certain doom. It’s something that makes Vi feel real, like she has a history that she carries with her, as natural as her pink hair.

EDG Crowned for the League of Legends World Championship 2021

The League of Legends World Championship wrapped up over the weekend, concluding another season of the premier esports scene. The grand finals pitted the reigning LPL champions EDward Gaming against the reigning LCK champs DAMWON Gaming, over a best-of-five series to determine who would be dubbed the latest world champion.

Bad news for those of you who have been waiting for some new content to land in eFootball 2022: its version v1.0 update has been postponed until spring 2022. Version 1.0 was supposed to land in eFootball 2022 next week on 11th November. However, Konami has today put out a statement delaying the update into next Spring – making it so players will have to wait until at least March to enjoy some new content in the game.

Elden Ring Discounts Even Before the 15-Min Gameplay Preview

PC players can currently pre-order both the base edition or the deluxe edition of Elden Ring for Steam at a 20% discount through Green Man Gaming. The highly anticipated Elden Ring is still a few months away from its launch date, but one retailer has already given the title sale discounts. Fans recently received an in-depth look at the upcoming FromSoftware title in the form of a twenty-minute Elden Ring gameplay preview.

Today has brought bad news for fans of the upcoming Marvel's Midnight Suns game originally scheduled for Spring 2022 as Firaxis Games today announced that the game’s release has been delayed.

So, you like mobile games, huh? Well, you’ve come to the right place, as we absolutely love them. So much so that we’ve decided to create a list of all of the big new mobile games of 2021-2022 so that you know what you’ve got to look forward to. We’ll even keep this updated as the year goes on, adding new releases as we discover them, so you’ll never miss out on an exciting new game to play.

A new NVIDIA GeForce leak has revealed that more PlayStation games are coming to PC, like Ghost of Tsushima, Horizon Forbidden West, and The Elder Scroll VI. A new leak involving the NVIDIA GeForce service has revealed some of the PlayStation games that are coming to PC in the future, including Ghost of Tsushima and Returnal. The identity of several upcoming PC ports of console games was potentially revealed in September when a data mine of the NVIDIA GeForce service brought up several names and tentative release dates.

Let the Games Begin! What mobile games might Netflix roll out?

Popular streaming giant Netflix has launched the first collection of games available for Android users worldwide. Netflix subscribers can now play five mobile games. These include "Stranger Things: 1984", "Stranger Things 3: The Game", "Shooting Hoops", "Card Blast", and "Teeter Up". The rollout started on Tuesday with the Netflix games available to download on the Google Play app store for all members on Android mobile and tablet devices globally. The mobile games will now begin slowly rolling out on the Netflix app for Android.