An Aussie freelance writer and editor writing about parenting, life and current events in Australia, and everything in between. 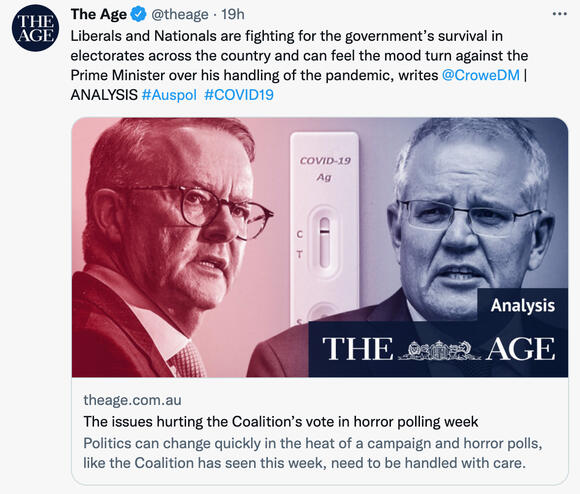 Resolve ran the first main opinion poll for 2022 that resulted in the Coalition dropping from 39 percent to 34 percent, with Labor in front for the first time at 35 percent in the primary vote.

The government's handling of the recent surge of Covid-19 cases in Australia has been controversial as decisions have centred around an attempt at reviving the economy at the cost of the public and the health system.

There's been a dire lack of rapid antigen tests (RATs) available for the general public combined with unregulated price gouging by retailers.

When asked on January 3 whether the government will reconsider handing out free RATs, Prime Minister Scott Morrison responded:

We've invested hundreds of billions of dollars getting Australia through this crisis. But we're now in a stage of the pandemic, where you can't just make everything free because when someone tells you they want to make something free, someone's always going to pay for it and it's going to be you.

Furthermore, it was reported that during a Hillsong (of which Scott Morrison is a known member) event that took place (that appeared much like a music festival with large crowds despite claims to the contrary during a statewide ban on singing and dancing) in January, each attendee was given a free RAT, and if an attendee got a positive result, they were given another free RAT just to be sure.

At a time when the general public are scrambling to find even one RAT.

Despite calls for Hillsong to be fined for the singing and dancing that took place at the event, NSW Police attended and made the call not to issue any infringements. Not only was this seen as a shock decision by the general public, NSW Premier Dominic Perrottet and Health Minister Brad Hazzard expressed their disdain.

While that may not directly be Scott Morrison's failure, his well-known ties to the controversial Hillsong Church and their ability to avoid fines for singing and dancing while there's a clear ban on singing and dancing, isn't a good look and has resulted in outrage across the state.

These latest issues appear to be part of what has resulted in the Coalition's drop in the opinion polls, but according to the same Resolve poll, Scott Morrison is still the preferred prime minister at 38 percent, to Labor leader Anthony Albanese's 31 percent.

With the federal election due to take place in coming months, only time will tell whether Scott Morrison can retain the top spot or whether the latest poll is an indication that he's halfway down a slippery slope with no way to climb back up.

An Aussie freelance writer and editor writing about parenting, life and current events in Australia, and everything in between.

I'm Not Going to Punish My Kids for Using "Naughty" Words

My 10-month-old was crawl-stomping (he’s kinda aggressive when he wants to get somewhere fast) into the bathroom just as my daughter had emerged from the bath. "F*ck the hell!" she said (translation: f*cking hell).

We haven't wanted to venture too far from home with the pandemic still running rampant. But heading into the third year of lockdowns, masks, avoiding crowds, and being cooped up at home with two small children, we decided it was time to find a mini holiday that's not too far away and not in a busy city location.

Dog Attacks Can be Avoided if Dog Owners Act Responsibly

My dog was attacked by another dog, and not for the first time. It’s a horrible, stressful experience and something I hope doesn’t ever happen to your dog. In recent years, I've encountered at least one dog off-leash every couple of days when I'm out for a walk with my dogs. And I'm not the only one. TV veterinarian Dr Katrina Warren has noticed an increase in the number of dogs off-leash in public areas that aren't designated off-leash areas.

It’s the goodbyes that stress me out the most. “Can I have a hug and a kiss?” someone asks my three-year-old daughter. “No,” she replies as she clutches at my skirt and tries to hide.

Nine-year-old Charlise Mutten was reported missing on Friday, January 14 from a luxury property in Mount Wilson, which sparked an extensive search by authorities. Her body was found in a barrel along the Colo River on Tuesday, January 18. Justin Stein, the fiance of Charlise's mother, Kallista Mutten, was charged with Charlise's murder.

As an avid reader, I’m usually learning about parenting techniques through books, as well as good old Google for questions like Is my 3-year-old a sociopath? and What are the symptoms of a concussion? (Okay, so I haven’t really googled the former but it does cross my mind every time my daughter looks me in the eye and does the very thing I told her not to do.)

Is It Normal to Get Back to Pre-Baby Weight?

I finally caved and bought two new pairs of jeans the other day. I’m five months postpartum and I’ve been living in one pair of jeans that fit plus my maternity jeans where the elastic at the back has a massive hole.