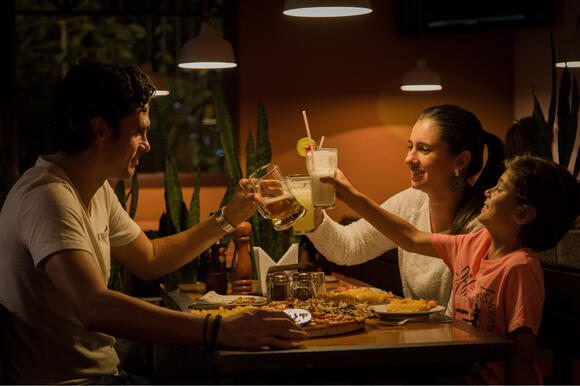 Down the Kanawha River from West Virginia's capitol city of Charleston is the small city of Dunbar.

Once a thriving area for Native Americans—as noted by the 11 burial mounds found in its 2.8 square miles—Dunbar became an agricultural community and vineyard, then an industrial community known for its glassmaking, bottling operations, and tractor company.

Today, Dunbar is a mostly residential city with commercial properties clustering around the Interstate or the Dunbar Bridge. While there are many locally-owned restaurants, pubs, and sports bars, the five most popular restaurants, according to TripAdvisor users, tend to focus on the easily found chains and franchises.

Although Ridge View BBQ is technically in the neighboring unincorporated community of Institute, WV, across from West Virginia State University, the boundaries between the two communities have blurred over the years, and plenty of Dunbar residents seek out the Ridge View BBQ drive-thru. The bright and cheery permanent location opened in 2011 and operates on weekdays to allow the family owners and operators to run a food truck at festivals and events. As the name suggests, the menu focuses on such BBQ classics as hickory-smoked ribs, pulled pork, and brisket. They also offer hot dogs, burgers, wings, chicken tenders, hot bologna sandwiches, and the house pork rinds. Ridge View BBQ is located on Fairlawn Avenue.

Since 2005, Los Agaves Mexican Restaurant has been serving Mexican food to West Virginians from its three locations. The locals refer to the Dunbar location as one of the “Mexican Shoney’s” restaurants even though they moved into the former Shoney’s building more than fifteen years ago now. Los Agaves has an extensive menu full of the expected Mexican and Tex-Mex staples, such as quesadillas, burritos, nachos, and fajitas, as well as dinner plates and more combination plates than anyone would expect. Adults can enjoy a wide variety of beers and ‘fish bowl’ glasses of Margaritas, frozen or not, and everyone can enjoy the desserts. In Dunbar, Los Agaves Mexican Restaurant is located on Dunbar Avenue.

Sticking with Italian cuisine, on the opposite end of Dunbar, hungry eaters can find a branch of Gino’s Pizza and Spaghetti House. While Gino’s restaurants do offer a variety of pizzas—including flatbread pizzas—and the option of regular spaghetti or baked spaghetti, they offer other dishes as well. Patrons can choose wings, salads, and sandwiches, including the “pizza bun,” a French bun baked with tomato sauce, cheese, and the diner’s choice of pizza toppings or the “pubwich,” a sandwich with the house pizza crust instead of bread. In Dunbar, Gino’s Pizza and Spaghetti House is located on Fairlawn Avenue.

Rounding out the top five most popular restaurants in Dunbar, according to TripAdvisor users, is the fast-food chain restaurant Captain D’s. With more than 500 locations across the United States, Captain D’s is perhaps best known for its hush puppies, deep-fried balls of cornmeal dough. Meal options typically include a battered or grilled fish or shrimp option with a breadstick or hush puppies and the choice of two sides, such as green beans, coleslaw, corn-on-the-cob, mac-and-cheese, okra, and more. A few chicken-based options are also available. In Dunbar, Captain D’s is located on Dunbar Avenue.