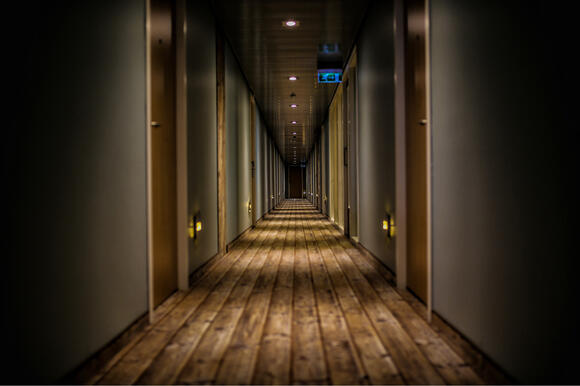 This October, six of these seven haunted hotels are accepting guests, for those brave enough to spend a night or two.

The Blennerhassett Hotel in Parkersburg

Opening in 1889 in the middle of an oil and natural gas boom, The Blennerhassett Hotel is a grand and elegant hotel in downtown Parkersburg. Guests and visitors have reported seeing more than a dozen different ghosts in the stately ballrooms, historic library, antiquated elevators, and elsewhere. The most well-known story centers around designer, builder, and then-mayor Colonel William Nelson Chancellor roaming the library and the halls. He, like most of the ghosts at The Blennerhassett Hotel, has no ghastly past tying him to the place.

The Lowe Hotel in Point Pleasant

Point Pleasant, West Virginia may be mostly known as the home of the Mothman, but it has other supernatural and paranormal draws, including the historic Lowe Hotel. Built in 1901, this once grand and upscale hotel leaves guests feeling like they’ve stepped into the past. Ghosts include a woman dancing like she might have in the old grand dance hall in the 1920s, a sea boat captain who waits in a room overlooking the Ohio River, and a few others wandering around the old halls.

Even cozy bed-and-breakfasts cannot escape the paranormal in Harper’s Ferry, West Virginia. While Harper’s Ferry’s National Park, historic buildings, past epidemics, fires, floods, and Civil War history bring paranormal hunters from all around, not much is known about the spirits who haunt the Harper’s Ferry Guest House. However, guests have reported a gruff old man who has no problem shoving them and a few other spirits.

The General Lewis Inn in Lewisburg

On the opposite end of the state, Lewisburg, West Virginia is also known for being a haunted city. The sprawling estate of the General Lewis Inn houses an opulent historic residence from 1834 with the West Wing’s hotel added in 1929. While the guest rooms are renovated and seemingly quite modern these days, that has not stopped the sightings of a woman in white and a child in some of the rooms. Guests also report seeing Reuben, a slave who was supposedly murdered in the area or perhaps even in the dining room where he now sits at a table.

The Clarion Hotel Morgan in Morgantown

Originally known as the Hotel Morgan before being bought by the hotel group Clarion, this luxurious 1920s hotel in Morgantown’s historic district boasts a two-story ballroom, a new restaurant overlooking the city, and presidential guests. The owners refute that the hotel is haunted, arguing that the stories about paranormal sightings have all come in the last twenty years. It’s unclear if the tales of a little girl who supposedly drowned in a bathtub and now haunts the room with her presence and intense sadness are multiple sightings or not, but paranormal investigators can decide for themselves.

The Wells Inn in Sistersville

Along the Ohio River in northwestern West Virginia, in the tiny town of Sistersville, The Wells Inn provides guests with a step back into another time. Ephraim Wells built the hotel in the mid-1890s and is now said to be haunting its halls. Guests have reported things moving without reason, doors opening and closing, inexplicable footsteps, and the sound of someone writing when no one is around.

While Hill Top House Hotel is currently being completely rebuilt after multiple major fires since its construction in 1888 caused irreparable structural issues, people had reported seeing spirits, hearing laughter, finding furniture moved, and hearing loud noises. Paranormal investigators might want to keep it in mind for its planned reopening in 2024.