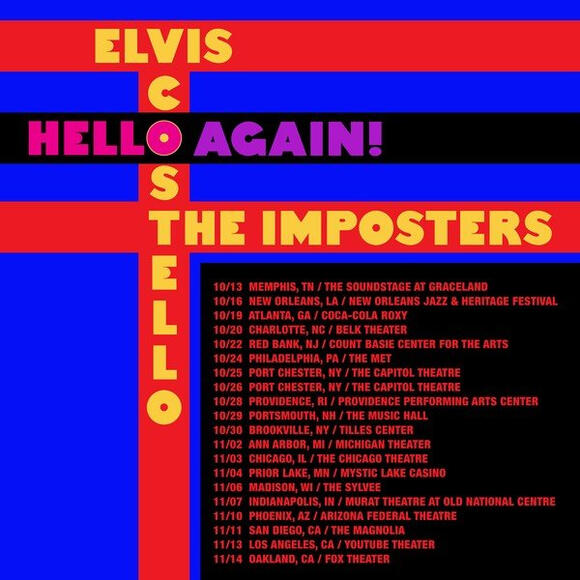 Two-time Grammy-winning English singer-songwriter Elvis Costello will be heading on tour again this October and November, he announced this week.

Costello will be performing with The Imposters, who have been his band since 2002. The "Hello Again" tour, which kicks off on October 13, 2021 in Memphis, Tennessee, will consist of twenty shows across nineteen U.S. cities.

Costello, a prolific musician who began his music career in the 1970s, often defies genre expectations and appeals to a wide variety of fans. He originally formed the backing band The Attractions after his first album and worked with them in the studio and on tours for nearly a decade. After parting ways with his backing band in 1986, Costello mainly worked as a solo artist until 2002 when he began working with The Imposters. The Imposters have two of the original members of The Attractions and one new member.

Unfortunately for West Virginians hoping to see Elvis Costello and the Imposters, none of their shows will be happening in the Mountain State. In fact, the only show happening in a neighboring state is the October 24th show at The Met in Philadelphia, Pennsylvania.

Still, fans in West Virginia who are willing to travel have options. Depending on which direction they wish to travel, fans may find shows in North Carolina, New Jersey, or Tennessee. These options may even be closer to home than Philadelphia.

Die-hard fans willing to make a larger trip may wish to catch Costello at the New Orleans Jazz & Heritage Festival on Saturday October 16th. The festival is a nine-day event that features hundreds of musical acts in a wide variety of genres. Big name acts performing the same day as Elvis Costello and the Imposters include Stevie Nicks, H.E.R., Jon Batiste, and Irma Thomas.

If seeing Costello live is not an option, fans in West Virginia may be heartened to hear that Costello is releasing a new album in September. The album, ‘Spanish Model,’ is a Spanish-language version of his 1978 sophomore album ‘This Year’s Model.’ Rolling Stone magazine ranked ‘This Year’s Model’ at #98 in the 500 Greatest Albums of All Time in 2003.

Costello will not be singing on ‘Spanish Model.’ Instead, the album will use the original music tracks with new vocals from Spanish-speaking artists, including Luis Fonsi, Sebastian Yatra, Fito Paez, and many more. The official music video for Juanez’s version of “Pump it Up” has already been released. The album will be available on September 10th.

Tickets for the tour go on sale July 23rd.

October 13, 2021: Memphis, Tennessee at The Soundstage at Graceland

October 24, 2021: Philadelphia, Pennsylvania at The Met

November 6, 2021: Madison, Wisconsin at The Sylvee