Meet Dúi, an adorable dog that looks like a cat 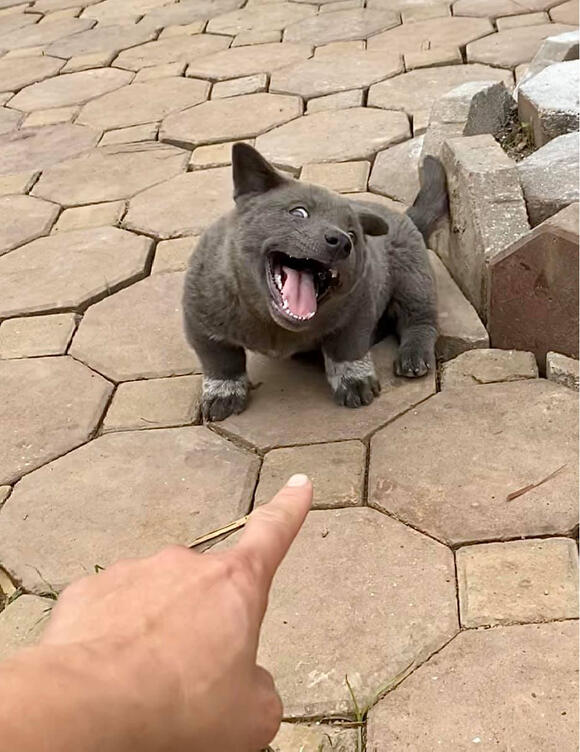 Dúi, a dog that lives in the city of Hanoi in Vietnam along with his parents, Hai Anh and Tuan, has an unusual appearance. He is gaining popularity on the internet because of his resemblance to a cat.

Dúi sometimes has an uncanny resemblance to a cat because of his fluffy gray hair, pointy ears, and long docked tail. His unusual appearance can be attributed to the fact that he comes from a mix of rare breeds, including an ancient native breed of Hmong, which is popular in the mountainous regions of North Vietnam, and a short-legged breed, Dingo, which is a breed that comes from Australia.

Pictures of this cute Vietnamese puppy Dúi surfaced on the internet two years ago, when they were shared on Reddit with the tagline 'Meet the derpiest fuzzball to ever walk the earth'.

His pictures instantly went viral, and the netizens were left amused with his bizarre expressions and antics. His owners even started a Facebook account for him where they keep uploading his pictures. The page had over 1,35,000 followers in 2020 and has received 191K likes (as of July 2022).

Dúi also has an Instagram account with 12K followers and over 700 posts (as of July 2022). The account has his videos and pictures, which are sure to melt hearts!

One of Dúi’s owners felt that there may have been some kind of a genetic mutation that made Dúi look like a corgi mix. They say that Dúi is a happy-go-lucky dog.

On 26 June, a 28-year-old mother gave birth to a baby girl with no limbs. She was born in a small village named Sakla in the Vidisha district of Madhya Pradesh, a state in India.

The mysterious village where all babies born are girls

The residents of a small village in the Dominican Republic have left the outside world astounded with its mysterious characteristic. All children born in this village are girls until some of them hit puberty and develop male external reproductive organs.

Mary Toft, the woman who claimed to have given birth to rabbits

Mary Toft, a twenty-five-year-old illiterate servant from Godalming, married Joshua Toft, a journeyman clothier. Her family was shocked when she gave birth to rabbits. An obstetrician named John Howard was being asked to examine the case. However, Howard was convinced she was telling the truth. He recorded that Mrs. Toft produced a rabbit's head, the legs of a cat, and, in a single day, nine dead baby rabbits.

Chastity Patterson, 23, from Arkansas, used to text her father, Jason Ligons, who died in a car accident four years ago, every day on his old phone number. The night before his fourth death anniversary, she texted her father “Hey Dad. It's ME. Tomorrow is going to be a tough day again.” She was amazed at what happened next.

Meet the 'one kidney village' where residents have only one kidney

After the Taliban took over the once beautiful country of Afghanistan, its economy was demolished, and almost 500,000 Afghans lost their jobs. 49.9% of the Afghan population lived in poverty which has forced people to sell organs to pay debts, buy food, and, in some cases, prevent selling their children.