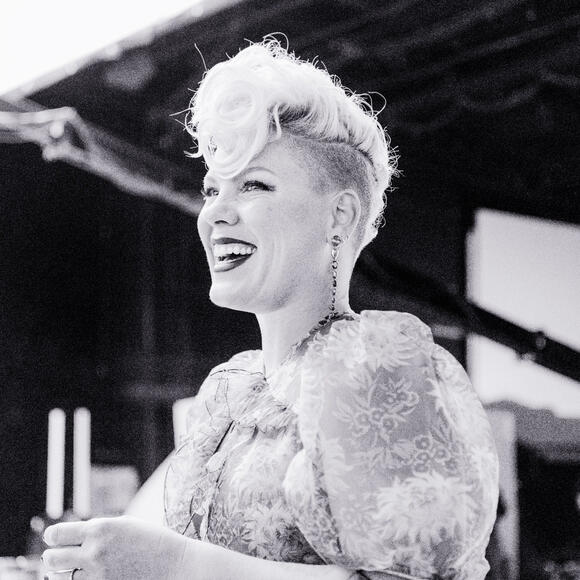 Given the overturning of Roe v. Wade, Alecia Beth Moore, as is Pink's real name, vehemently sent a tweet. With the Supreme Court making a ruling that returns "The abortion issue to the people's elected representatives," there have been massive protests by the public. This decision by the Supreme Court has incurred the wrath of celebrities and Democratic-Republicans as well.

Famous musician Olivia Rodrigo even staged a musical protest against this decision at the Glastonbury Music Festival in the United Kingdom. Pink's tweet garnered a great response, with many people liking, commenting, and retweeting it. There were many hateful comments to which Pink replied and did not take them lying down. She had the perfect response to many who criticized her.

There was one tweet, in particular, that got out of hand by Kenny v/s Spenny comedian Spencer Rice who tweeted about Pink stating that he hopes her agent survives the stroke, to which Pink replied, "I am my agent. We are fine".

This particular tweet angered Pink's fans, who flooded his social media accounts with hateful comments, following which Rice made a video on Twitter that confirmed that his comment was only a joke. He also replied to Pink, saying that she has an exceptionally supportive fanbase, following which Pink urged her fans to leave Spencer Rice alone.

She continued criticizing the Supreme Court's ruling on Sunday as she wrote in her tweet about how years of racism, wars, misogyny, and pandemics have hurt everyone and have literally 'fried everyone's nerves.' On an optimistic note, she added that we are all in this together, and good will trump evil. She also added, "And to all of you sad, old white men asking me if I still make music. I realize you're out of touch- so ask your kids... Oh wait- you can't. They hate you."

On June 24, the Supreme Court ruled 6-3 to uphold Mississippi's Gestation Age Act which was 2018 ruling and banned abortion after the 15 weeks of pregnancy, barring cases such as medical emergencies and fetal abnormalities.

Meet Midas, the adorable four eared cat, who is an internet sensation

Midas, a cat from Turkey who was born with a set of additional ears and a defective jaw has become an internet sensation because of her unusual appearance. This cute cat has become a social media star with a massive fan following of over 336K followers on Instagram.

Meet Shyja, the woman who flaunts her mustache with pride

In a world where women are paying money to remove their facial hair, meet a woman who is sporting her mustache with pride. Shyja, a 35-year-old hailing from the Kannur district in the Indian state of Kerala, declared that she loves her mustache in a Whatsapp status.

A video of a newborn baby with redness and cracks on the skin has gone viral because of its ‘alien-like’ appearance. People are calling it ‘demon child’ and ‘alien baby.’ According to the video, this unusual baby was born to Sajeda, wife of Shafiq, in the Ratlam district of Madhya Pradesh, a state in India.

A goat gave birth to a baby with a rare "humanoid" appearance in the Cachar district of the north-eastern state of Assam in India. This incident took place in Gangapur village in Dholai Vidhan Sabha Constituency in December 2021. Shankar Das, who owns the goat, was left stunned by the turn of events.

Stories of MLM (multi-level marketing) members using Facebook and Instagram to find potential members to grow their network are common. MLM members have also started using dating apps to connect with more people. They disguise recruiting events as dates and try to convince their date to join their business.

Meet Moet, the cat with no eyes, who is an internet sensation

Moet is an eight-year-old blind Persian cat who is stealing the hearts of millions with her adorable videos and pictures. Born in the streets of Oman, Moet was hungry and just a few weeks old when she was brought into a pet shop.

A blind dog has found a friend, a guide cat, that will help him navigate through their house so that he won’t step on her or bump into things. Disclaimer: This isn't the picture of Blaze and Satin. It's an image taken from Pexel;Photo by belen capello from Pexels.

Dad wants son to forgive him for abandoning family

Is one entitled to forgiveness because they repent their actions?. A recent Reddit post about a dad, who abandoned his family, trying to bond with his son went viral with over 5K upvotes and 500 comments.

He vaccinated over 30 students with the same syringe, and then asked, "How is it my fault?"

An alarming case of the negligence of Covid-19 vaccination and 'one needle, one syringe, one time’ protocol occurred in Sagar, a city in Madhya Pradesh, an Indian state. Jitendra Rai, the vaccinator, vaccinated at least thirty students using a single syringe in a prestigious school. He claims he did so because the authorities provided him with only one syringe. He also added that the ‘head of department’ said he should vaccinate all children with it.

Meet Simba, a goat with 22-inch long ears, who became an internet sensation in days

Simba, a goat from the city of Karachi in Pakistan, has won the hearts of many with strikingly long ears. When the internet sensation was born on June 4th this year, his ears were only 19 inches long. His ears are now 22 inches long and show no sign of stopping growing.

Does one have the upper hand in a relationship if they possess more assets?. A property deed is a vital document that lists the owners of a particular property. Based on the deed, the owners might get the right to control, drive income, possess, and do more with the property.

Local fishermen finds 'whale vomit' worth over $3.5M from the sea

A group of local fishermen from Vizhinjam, India, came across ambergris or whale vomit worth over $3.5M approximately (as of July 2022). They have handed it over to the coastal police as per reports.

Chess is a game of strategic thinking, concentration, and patience. Violence is rarely a part of it. But in a chess tournament in Moscow, Russia, a robot playing chess grabbed the finger of a seven-year-old boy and fractured it.

Woman wants to combine her wedding with her son's

Should one force their daughter-in-law to have a double wedding?. Weddings are ceremonies celebrating the union of two people who vow to support and love each other. But sometimes family members try to enforce their likes about the ceremony, creating problems.

Should one come clean to a person about their spouse’s infidelity?. An extra-marital affair can take a toll on one’s mental health, cause anxiety, and reduce self-esteem. They might also hate themselves and wonder whether they aren’t good enough because of their spouse's infidelity.

Man steals $14,000 from his hardworking girlfriend

The cost of education in the US is tremendously high. According to a research, the average cost of college is $20,770 for public schools (in-state) and $46,950 for nonprofit private schools.

Meet Dúi, an adorable dog that looks like a cat

Dúi, a dog that lives in the city of Hanoi in Vietnam along with his parents, Hai Anh and Tuan, has an unusual appearance. He is gaining popularity on the internet because of his resemblance to a cat.

Man tells his pregnant wife that he loves her sister

Although one can’t control whom they love, they can recognize their feelings initially and make appropriate decisions. One could either encourage the feeling or avoid the person to discourage it.

What if an unemployed person tries to take advantage of their spouse?. A lazy spouse can sit back and relax and add work to one’s already hectic schedule. Such behavior can make one resent their lazy spouse and damage the marriage.

Air hostess reveals what happens when someone dies on a plane

The chances of occurrence of a medical emergency on a plane are around 1 in 600, as per a study in the New England Journal Of Medicine. Have you ever wondered what happens in case someone dies on a plane?