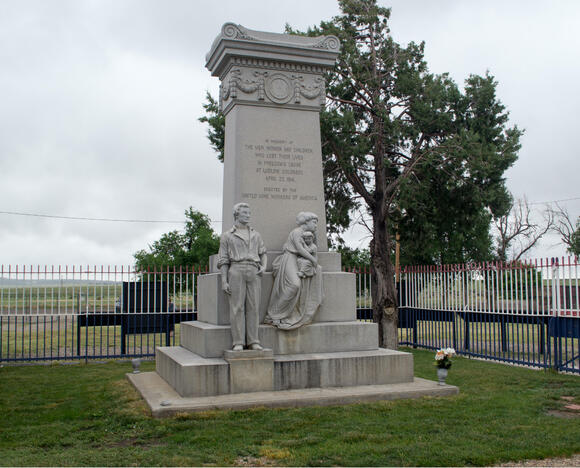 A monument to the victims of the Ludlow Massacre, erected in 1918.Don Barrett / Flickr

(Trinidad, Colo.) The United Mine Workers of America union will honor victims of the 1914 Ludlow Massacre in a remembrance that comes as organized labor sees a resurgence throughout the country.

The service, to be held from 10 a.m. to 1 p.m. Sunday at the Ludlow national historic landmark in Trinidad, will commemorate the 1914 gun battle between the Colorado National Guard, private guards and striking coal miners living in a tent colony.

“At least nineteen people died, including one guardsman, five miners and thirteen women and children who suffocated as they hid from the gunfire in a pit,” according to the Colorado Encyclopedia. “More died in violence throughout southern Colorado over the next few days. No matter how the casualties are counted, the Ludlow Massacre is one of the bloodiest events in American labor history.”

The remembrance, which the union holds each year, comes at a time when unionization is gaining momentum across Colorado and the nation.

In January, grocery workers and King Soopers/City Market stores in the Denver metro area, Boulder and Colorado Springs reached a contract where the company said it will spend $170 million in wage increases during the three-year agreement and make additional investments in health care.

Nationally, requests for the National Labor Relations Board to conduct elections to determine if employees want to be unionized rose 57 percent in the first half of the federal agency’s 2022 fiscal year compared with the same period a year prior. A Gallup poll conducted in August 2021 showed 68 percent of Americans approve of labor unions, the highest reading since 1965.

“Unions are definitely being sought in workplaces where people are thinking their rights are not being adequately addressed,” said Ellen Kelman, senior partner who practices employment and labor law with the Denver-based Kelman Buescher Firm.

The push for more organized labor comes as an outcropping of the pandemic, she said.

“The workers felt that employers didn’t care about their safety and health,” said Bob Butero, the Trinidad-based director of the mining union’s office serving the western United States and Canada. “Employers were going to sacrifice them for the ability to do business.”

THC-infused brownies for sale in Colorado in 2018.THC Photos / Flickr. (Across Colorado) The mix of cannabis product sales is changing as overall sales in Colorado’s legal marijuana industry slow, and prices for marijuana products decline.

(Denver, Colo.) Newmont Corp. and a union representing workers at a mine in central Mexico reached a profit-sharing agreement that averts a strike. Denver-based Newmont – the biggest gold miner in the world, both by stock market value and ounces produced – will pay the workers a profit-sharing bonus of the equivalent of $70 million, the company said this week.