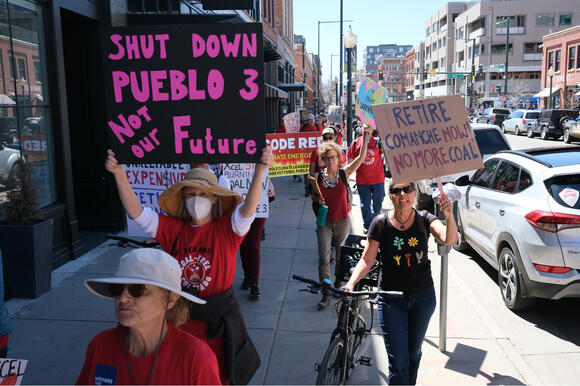 On Monday, the Colorado Public Utilities Commission (PUC) will deliberate whether to accept the company's planned 2034 shutdown date for its Comanche Unit 3 generating station. The company contends it needs more than a decade to bring less-polluting generation online. But opponents worried about local pollution and broader environmental damage want Xcel to shut the plant down sooner.

On Friday, environmental and community groups gathered in front of Xcel's downtown Denver headquarters to call for the plant's closure.

"The PUC should tell them to shut it down straight away," Velma Campbell, a 74-year-old Pueblo resident and member of Mothers Out Front, said in a speech. "We don’t need that air pollution."

Xcel spokeswoman Michelle Aguayo said the plant is an essential asset as the company brings on more renewable resources.

Under a plan put forward by the company and agreed to by parties including the cities of Denver, Boulder and Pueblo, the plant would begin running under reduced operations in 2025 and be retired in 2034, earlier than initially proposed, Aguayo said. Overall, that agreement would reduce carbon emissions in the state by 87% from 2005 levels by 2030.

She said that it would also give employees time to transfer or complete retraining and for the company and communities to find ways to deal with tax impacts and other economic concerns.

"This timeline gives the industry the time it needs to develop new, zero-carbon dispatchable resources that are available 24/7 in all weather conditions," Aguayo said. "Reliability, affordability and a just transition are all critical considerations in this clean-energy transition."

But Western Resource Advocates, a Boulder-based environmental group that filed a revised position statement with the commission on Wednesday, wants the regulators to require Xcel to analyze a potential 2029 shuttering, saying that date would save ratepayers money.

In March 2021, the commission released the results of an investigation into Comanche 3's operations. It cited poor maintenance practices and equipment defects and said the plant had an average of 91.5 down days each year from when it started commercial operations in 2010 through the end of 2020. Only 27 percent of those outages were planned.

According to Environmental Protection Agency data, the plant – including Units 1 and 2 – is one of Colorado's biggest polluters, releasing 4.5 million metric tons of carbon dioxide equivalent in 2020. In recent years, it topped the list, releasing 9.3 million metric tons in 2018, but shutdowns have lowered its emissions.

Feds approve energy transmission line that will run through Colorado

Wind turbines in Medicine Bow, Wyoming, in May 2012.Tony Webster/Flickr. (Moffat County, Colo.) The White House on Thursday said it gave the greenlight for construction of a 416-mile electricity transmission line that will run through northwestern Colorado and could increase power reliability in the state even though it won't directly serve households or businesses here.

A Nikola Tre electric truck on display at the Colorado State Capitol in March.Colorado Department of Transportation. (Across Colorado) Back in March, Aurora-based Wagner Equipment Corp. became the first in Colorado to offer an electric semi truck. As of Tuesday, the heavy equipment dealer hadn’t sold any of the Nikola Corp. vehicles but had three “solid” proposals in front of potential customers.

A truck tractor parked at McCandless Truck Center in Aurora.Matt Whittaker / NewsBreak Denver. (Aurora, Colo.) Just south of the Airport Boulevard exit in northern Aurora, as the Front Range gives way to the plains, lies an oasis for truckers traveling the major freight corridor of Interstate 70.

A drilling rig in Weld County.Scott Branson/Flickr. (Across Colorado) The Biden administration’s plans to hold oil and gas lease auctions in Colorado next month have drawn the ire of environmental groups who worry about the effect new drilling will have on climate change.

EVgo launched the company’s first fast charging station at a Colorado Whole Foods Market in 2018.EVgo Network/Flickr. (Across Colorado) A new study found that Colorado is the fifth easiest state to charge electric cars, underscoring a state push to electrify the transportation sector and the increasing popularity of the vehicles amid rising gasoline prices.

An anti-buzzed driving ad in Toronto, Canada.Cory Doctorow/Flickr. (Denver, Colo.) With the Mile High 420 festival underway in Denver, the Colorado Department of Transportation and AAA Colorado want to remind people that driving high is dangerous.

Fed legalization could be double-edged sword for Colo. cannabis biz

Proponents of marijuana legalization carry a 51-foot inflatable joint near the White House in 2016.ep_jhu/Flickr. (Across Colorado) Federal cannabis legalization could end up being a double-edged sword for Colorado marijuana businesses depending on how Washington structures regulations for an industry that added more than $2 billion to state coffers since legal recreational sales began in 2014.