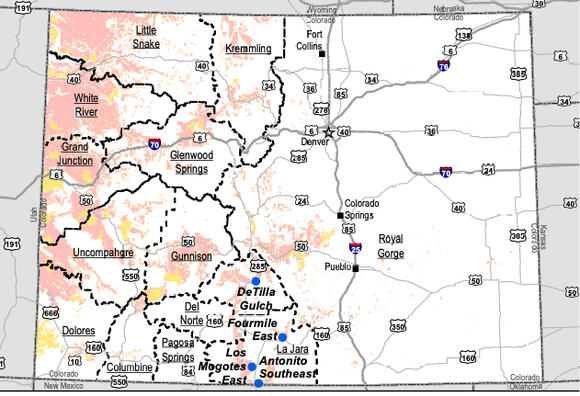 Solar energy zones in south-central Colorado. (The Fourmile East area is no longer available for utility-scale solar development.)Screenshot from a BLM website.

(Alamosa, Colo.) The Bureau of Land Management is soliciting interest for utility-scale solar energy development on more than 13,000 acres of public land in the San Louis Valley of south-central Colorado near Alamosa.

That acreage is part of the agency’s largest solar development solicitation since designating 17 solar energy zones in Colorado and other states in a 2012 planning effort.

“Scaling up support for responsible renewable energy production is one of the BLM’s top priorities as we work across the Department of the Interior to lead the way in creating a clean energy economy in the United States,” BLM director Tracy Stone-Manning said. The agency is housed inside the Interior Department.

In Colorado, the specific areas identified for solicitation are:

Located in Conejos County on the New Mexico border, the Antonito Southeast zone sits in a semi-arid basin of undeveloped scrubland used for BLM-authorized grazing, the agency said. Alamosa, located about 34 miles to the north, is the biggest nearby town.

The DeTilla Gulch zone in Saguache County lies in a high-elevation basin in the Rocky Mountains. Alamosa is about 50 miles to the south.

Also located in a high-elevation basin in the Rocky Mountains, the Los Mogotes East zone in Conejos County about 12 miles north of the New Mexico border lies in a flat alluvial fan topped by scrubland. Alamosa is about 22 miles to the northeast.

The bureau is also requesting development interest in Nevada and New Mexico as part of the recent solicitation announcement.

The areas are part of about 870,000 acres of federal public land the BLM has allocated “as environmentally preferable for solar leasing based on the areas’ high potential for solar energy, suitability for utility-scale solar facilities and limited potential for natural and cultural resource conflicts.”

(Glenwood Springs, Colo.) The company developing a solar array and battery facility at Colorado Mountain College's Spring Valley at Glenwood Springs campus said the project is nearly complete and will be operational this fall.

An electric-car charging station with a car plugged in.Ivan Radic / Flickr. (Denver, Colo.) The U.S. Department of Transportation gave the green light to a Colorado plan for a statewide electric-vehicle charging network, unlocking $57 million in federal funds for the state, officials said this week.

A Union Pacific engine heads a weekly train from Grand Junction to Montrose.Chuckcars / Flickr. (Across Colorado) Colorado coal mine managers and coal-fired power plant operators are bracing for a potential national railroad strike that would disrupt fossil fuel shipments from western Colorado to utilities in the state.

Goats beginning to graze the noxious weeds at Malmstrom Air Force Base in Montana.Elin Pierce / U.S. Fish and Wildlife Service / Flickr. (Pitkin County, Colo.) For the seventh year in a row, the Roaring Fork Transportation Authority has hired Goat Green to bring in hundreds of goats to graze on weeds along 20 miles of the Rio Grande Trail corridor.

An installation at the Solar Technology Acceleration Center in Aurora.U.S. Department of Energy / Flickr. (Across Colorado) Colorado added 32 megawatts of solar generation capacity in the second quarter of this year, bringing the percentage of the state’s electricity from solar to nearly 6%, according to numbers from the Solar Energy Industries Association.

Front Range foothills above Boulder with wildfire haze and dust kicked up from a tractor.Bo Insogna / Flickr. (Boulder, Colo.) The Boulder City Council gave preliminary approval to add a proposed climate tax to the November ballot.

A steel worker at the mill in Pueblo.Helen H. Richardson/The Denver Post via Getty Images. (Pueblo, Colo.) A European steel company backed by a sanctioned Russian billionaire is selling its steel mill in Pueblo amid tensions over the war in Ukraine. So far the company hasn’t let the city know if any potential buyers are interested.

(Denver, Colo.) Slumping cannabis sales in Colorado are increasing the stakes for Denver’s marijuana industry as it faces a ballot initiative that would place a new tax on the city’s weed sales.

(Gunnison County, Colo.) A burning underground coal seam started a fire southeast of Somerset that officials say may continue for a long time. On Monday, the Gunnison County Sheriff’s Office said on Facebook that it was aware of a fire burning near Colorado 133, posting a photo of smoke on a hill with a helicopter above. It said crews were managing the fire, and additional resources were on their way.