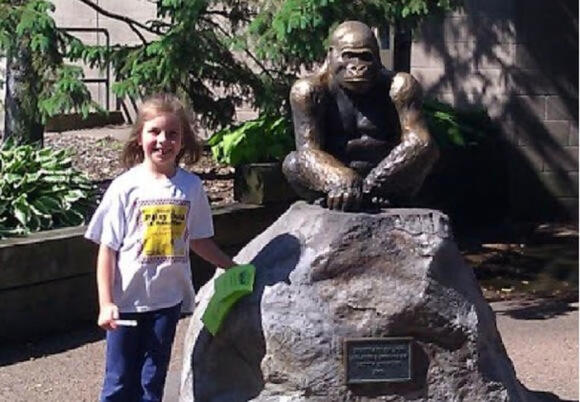 SAINT PAUL, MN - On a spring day in 1994, visitors to Saint Paul’s Como Zoo were surprised to see a gorilla enjoying a stroll on the zoo’s grounds. His forty-five-minute-long escapade created a memory for those in attendance that will last a lifetime.

Each year millions of people come to visit the Como Zoo. There are few better ways to enjoy a beautiful Minnesota day than going to the zoo and seeing the animals up close. It’s a fun time — one that a person goes into without expectations because you can simply never know what you’ll get to see.

On May 13, 1994, patrons, usually content seeing the animals in action on the inside of their enclosures, unwittingly became part of the zoo experience.

At 11:30 AM, a crowd smiled and laughed as they watched the gorilla Casey II (affectionately known as Casey) bounce up and down at the center of his enclosure. Suddenly he leaped, jumping from the raised middle island toward the surrounding fifteen-foot cement wall. With the strength of a — well, 400-lb gorilla, Casey pulled himself up and over the wall. He then hopped a small fence and went for a walk.

Zoo officials quickly ushered visitors to safety — interestingly, the insanity of the moment didn’t seem to be a cause for alarm for many in attendance. Visitors spoke of Casey’s complacent demeanor and that he seemed just as shocked to see them as they did him. No one reported feeling threatened.

Seven Saint Paul police officers and eleven zoo guards immediately trailed Casey. After being allowed a short time to roam the grounds, they shot the gorilla in the “backside” with a tranquilizer dart. Unhappy about being shot, Casey pulled the dart out and tossed it to the ground.

Casey calmly continued his journey before curiously stopping in his tracks. Standing in front of the gate at the end of the zoo’s driveway was veterinarian Ralph Farnsworth — who the gorilla likely associated with needles to sedate him before medical procedures.

Not a fan of the first tranquilizer dart and not willing to deal with more of the same, he strolled back to his enclosure, climbed back over the fence, and jumped back inside. Before he returned, he took a moment to stand on a picnic table near the women’s restroom and inadvertently left footprints in some recently poured asphalt.

Interestingly, the tranquilizer dart the hit Casey never injected. He had returned to the exhibit of his own accord. After the incident, zoo officials began planning safety upgrades to his space to keep escape from happening again.

Thankfully, no one — including the gorilla — was harmed. While it was a scary situation for all involved, including the many children there on a field trip that day. It gave everyone there something to talk about for a very long time.

The whole ordeal was best summed up by kindergartner Bobby Valikus, who, when asked about the events of the day, exclaimed, “It was awesome.”

A short time after the event, the zoo painted gorilla feet throughout the grounds to show future visitors the path that Casey traveled the day he took in the sites.

There were many theories about why Casey left his enclosure, but no one could say for sure. It is an event that is still talked about in Minnesota over twenty-five years after it happened.

On Saturday, January 13, 1996, nine-year-old Amber Hagerman and her five-year-old brother Ricky went with their mother Donna Whitson to Arlington, Texas, to see their grandparents. At around 3 PM, the two kids, who had bicycles at the house, asked if they could ride in the neighborhood. It was 70 degrees, and the kids wanted to get out and enjoy the beautiful weather.

Hanging of the Dakota 38: The Largest Mass Execution in US History Took Place on December 26, 1862

"We have waited a long time. The money is ours, but we cannot get it. We have no food, but here are these stores, filled with food. We ask that you, the agent, make some arrangement by which we can get food from the stores, or else we may take our own way to keep ourselves from starving. When men are hungry they help themselves" ~ Taoyateduta (Little Crow), 1862.

Fred Korematsu was born in Oakland, California, on January 30, 1919. After graduating high school, he wored as a shipyard welder, a job he was fired from after the Japanese bombing of Pearl Harbor on December 7, 1941. That horrific attack turned the United States against its Japanese-American citizens.

MINNEAPOLIS, MN - An explosion in popularity of bicycling followed the introduction of the "safety" bicycle in the mid-1880s. It was intoxicating to travel as far as your wheels would take you, and soon a large portion of society was riding a bicycle. There were also social benefits. Bicycles played a crucial role in the drive for better public roads during this time, as well as being a driving force behind the women's emancipation movement of the era.

St. Paul Police Officer James Sackett (1970)St. Paul Police Department. On May 21, 1970, twenty-seven-year-old St. Paul Patrolman James Sackett, only on the job eighteen months, returned to work after enjoying a short paternal leave after the birth of his fourth child. Sackett's professional life was the fulfillment of his lifelong ambitions. Shortly after midnight, Sackett was murdered while responding to a call for help for a pregnant woman.

John's Bar, 2500 Marshall Street, Minneapolis.MNHS. John's Bar and Funhouse, formerly located at 2500 Marshall Ave NE in Northeast Minneapolis, was one of many saloons that once occupied the location on the corner of Lowry and Marshall since 1905. It was a popular local bar that opened in 1946, one which found itself at the center of a scandal in 1953 that rocked the city of Minneapolis and the Midwest as a whole.

ST. PAUL, MN - In the days leading up to Easter 2006 a cloth bunny, pastel colored-eggs, and a sign reading “Happy Easter” were taken down from the lobby of the St. Paul City Council offices after concerns over the appropriateness of publicly recognizing the Christian holiday in a government building. The simple act of putting up decorations ignited a political firestorm that reached every corner of the United States—and parts of the world.

The business partnership between William Constans and Jacob Schmidt began on August 4, 1884 when Schmidt purchased a fifty-percent interest in the North Star Brewery. With this purchased he replaced Reinhold Koch as part-owner of the brewery located down-creek from Swede Hollow at the foot of St. Paul’s Dayton’s Bluff.

The Bicycle Scorcher Menace of the 1890s

ST. PAUL, MN - The safety bicycle revolutionized bicycling in Minnesota (and beyond) in the mid-1880s. More and more people began riding, and the bicycle’s popularity grew exponentially. Despite this, little was done to accommodate the new mode of transportation. Ever-increasing numbers of bicyclists, called “wheelmen,” rode on sidewalks packed with pedestrians. Frequent collisions made travel unsafe and led city officials to pass an ordinance that forced riders off of city sidewalks and onto the street.

MINNEAPOLIS, MN - At noon on December 1, 2017, Minneapolis craft brewer Modist Brewing Co. officially launched its latest offering, a limited-release Mosaic Double IPA titled 'Dilly Dilly' in its North Loop taproom. A little more than two hours later, a representative of Anheuser-Busch's InBev, the company that produces and distributes Bud Light, walked through their doors to present one of the most unique cease & desist letters in recent memory.

ST. PAUL, MN - In January 1885, Merriam Park was incorporated into the city limits of St. Paul. In negotiations, the parties involved agreed that no saloon would be licensed within a four-mile radius of the newly annexed area, beginning with Merriam Park at the center. This agreement included a portion of the 200-acre region to the north known as the Midway district.

The 1985 film "That Was Then... This Is Now" put St. Paul's east side on the national stage, even if for only a short time. The movie showcased the neighborhood's eclectic mix of old and new structures along East Seventh Street, places like St. John's hospital, 7-11, 10,000 Auto Parts, and Spanky's Saloon.

The History of Whiskey the Horse of Fort Snelling

Whiskey, the famed Army horse at Fort Snelling, with Captain W.R. Hazelrigg, his trainer.(1934)MNHS. Horses were a significant part of life in the United States Army in the early part of the twentieth century. Hubs located near forts, called remount stations, were stocked with fresh horses, allowing an officer to exchange a travel-weary mount for a fresh ride.

The History of the Minnesota State Capitol Rathskeller

ST. PAUL, MN - After nine years of construction, the Minnesota State Capitol opened its doors to the public on January 2, 1905, one day before the 34th Legislature convened. Designed by architect Cass Gilbert, the magnificent new building, constructed with care and elegance throughout, was deemed the crown jewel of Minnesota. The German-themed rathskeller located in the capitol's basement was a hidden gem within the grand structure.

The History of the Hamm's Bear

ST. PAUL, MN - The iconic Hamm’s Bear was first sketched on a restaurant napkin by ad executive Cleo Hovel during a “three-martini” lunch meeting at Freddie’s restaurant in Minneapolis. Among those in attendance were Hovel and “Betty” Burmeister of the Campbell-Mithun ad agency, Howard Swift, a TV animator from Swift-Chaplin in California, and representatives from St. Paul’s Hamm’s Brewery.

The Sweet Shop Bakery Comes to Saint Paul's East Side: A 'Pop-In' Event is February 12th and 14th from Noon - 6pm

Come one, come all! The Sweet Shop bakery is hosting a pop-in event at 935 Maryland Ave E on Saturday February 12th and February 14th from noon - 6PM. Bakery owner Ashley Fowler, a former resident of St. Paul’s east side is excited to introduce her assortment of freshly-made treats to the community she considers home. “Sweet” is her bakery's love language, and she is passionate about using food to create meaningful connections.

The Rand Liquor Ordinance of 1892

The Rand Ordinance article titleMinnesota Historical Society. In the second half of the 19th century, Minnesota was caught up in the national alcohol temperance movement. The intoxicating liquor industry was at the center of a conflict involving those who felt alcohol negatively influenced society and those who advocated drinking for enjoyment. By the 1880s, the fight between the factions reached a fever pitch.