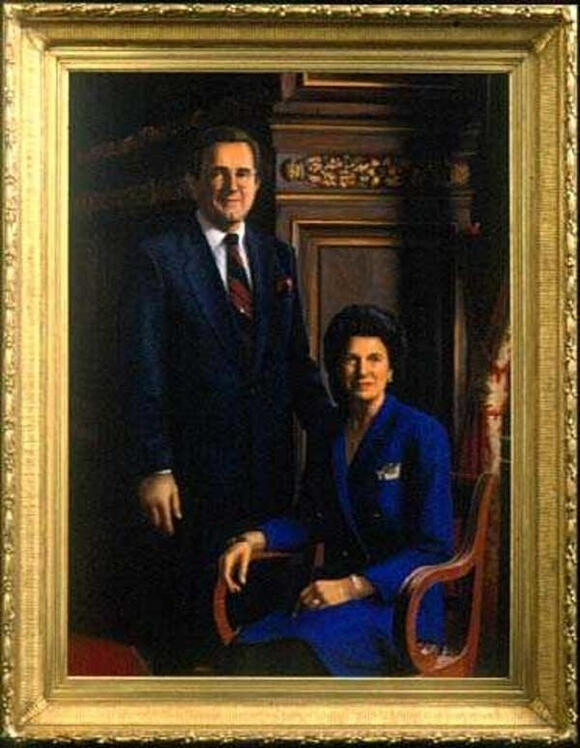 SAINT PAUL, MN - In 1991 outgoing Governor Rudy Perpich commissioned artist Mark Balma to paint a portrait of him and his wife Lola to be placed on the walls of the State Capitol. This was (and is still) traditionally done to commemorate those who had served as the state's chief executive. The portraits were then hung on the walls of the Capitol building at the end of their term. Perpich, having served previously as governor, already had a painting. A "portrait war" ensued.

Perpich is the first person in Minnesota history to serve non-consecutive terms in the governor's seat, from 1976-1979 and 1983-1991. His first portrait, commissioned at the end of his first term, showed him standing in front of an open-pit mine in Hibbing, MN. It was a call to his Iron Range roots, an homage to his hometown and its importance to him.

In March of 1991, the Capitol Area Architectural and Planning Board voted to allow each state governor to have only one portrait regardless of their length of time in office. Perpich already had his in place in the Capitol from his first term and wouldn't be allowed a second one. He requested that the new painting become a replacement for the first, but the Planning Board declined his request, ruling the governor must be the only subject in the portrait.

As the outgoing governor, Rudy wanted his wife Lola, who he felt was an integral member of his administration, to be recognized for her contributions. But it was not allowed. The idea of adding the first lady to the governor's portrait hadn't come up in over 130 years of statehood, so the board ruled in favor of maintaining precedent.

The Perpich family was famously close-knit, and the outgoing governor was not going to back down. In his opinion, just because it hadn't been done in the past didn't mean it shouldn't be done now.

Perpich felt that the decision of the Capitol regulatory officials was unfair. He argued that if his predecessor Al Quie, the man who defeated him in 1978, could be shown with his horses, then he should be allowed to include his wife. Perpich couldn't understand why this was an issue and wondered "if most men don't like their wives or something."

When that argument failed to gain traction, the family paid $4,000 to rent a billboard on University Avenue. Located less than five blocks from the State Capitol, it showed a replica of the duo's portrait and bore the message, "They won't let us in the Capitol, so `Hi` from here." The Planning Board was not swayed, and the single first-term portrait of Perpich remained in the Capitol.

Although Perpich wouldn't live to see it, he passed away in 1995, his and Lola's joint portrait eventually found its way onto the State Capitol walls. On June 27, 2000, five years after his death from colon cancer and on what would have been his 72nd birthday, it was unveiled at a ceremony at the State Capitol.

The 10-year battle had ended with the portrait hanging alongside those of Minnesota's other governors. Because only one portrait could be displayed, it replaced the one completed after his first term.

It was the first time in state history that the first lady was portrayed alongside her husband.

Image of the Stroh Brewery in east St. PaulPlaceography.org. Shortly after the Stroh Brewery Co. (Stroh’s) finalized its purchase of the G. Heileman Brewing in July of 1996, rumors began to swirl that their east St. Paul plant — the former Hamm's Brewery complex — would be shuttered. Heileman's flagship production facility in LaCrosse, WI, could support the combined volume of both sites, and the prevailing opinion was the smaller, antiquated facility would be closed.

On Saturday, January 13, 1996, nine-year-old Amber Hagerman and her five-year-old brother Ricky went with their mother Donna Whitson to Arlington, Texas, to see their grandparents. At around 3 PM, the two kids, who had bicycles at the house, asked if they could ride in the neighborhood. It was 70 degrees, and the kids wanted to get out and enjoy the beautiful weather.