Researcher and content creator for the Minnesota Then Beer and Brewing History Museum.

The Story Behind St. Paul's "Monument to the Living" 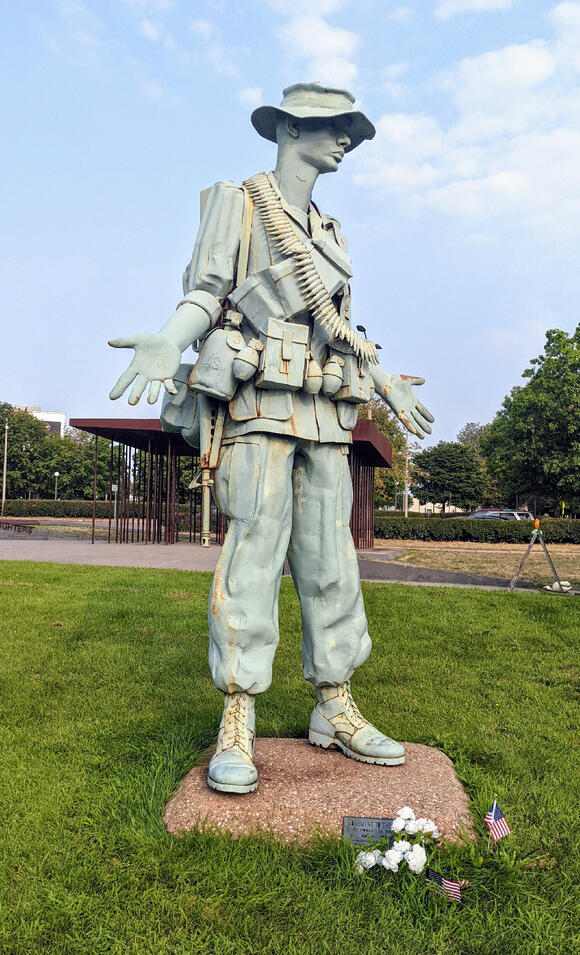 "Monument to the Living" statueMatt Reicher

On May 22, 1982, only days before Memorial Day, the “Monument to the Living” statue was unveiled on the Capitol Mall in St. Paul. It was created by Vietnam veteran and artist Rodger M. Brodin and was made with 2,500 pounds of steel hammered and welded together.

A soldier with an M16 slung over his shoulder stands with with outstretched arms asking “Why did you forget us?” Brodin left the soldier’s expression up for interpretation, refusing to say whether the pose was a shoulder shrug or a show of despair.

He didn’t feel it was his right to tell others how to view his work.

The piece, a gift for the veterans of America, is located to the west of the Veterans Services Building. It was dedicated to soldiers who fought and survived wars and conflicts, and looked to preserve the memory of those who left to fight but didn’t make it back.

Brodin took more than a year to complete the project. He used it to help deal with the trauma he struggled with after his return from Vietnam. The finished product differed from the artist’s initial plan for the work. Years prior Brodin wanted the piece to convey depression and initially envisioned a soldier surrounded by skulls and punji sticks.

The finished work represented a change in Brodin. Conversations with fellow veterans helped him overcome his own depression. He hoped the statue would become a vehicle to help fellow soldiers open up about their own experiences, both during the fighting and after it ends, and heal.

The $23,000 paid for the statue and installation was raised by VFW chapters throughout the state—with an assist from various American Legion groups.

No state funds were used.

Today, "The Monument to the Living" can be found near the corner of John Ireland Blvd and W 12th St, west of the Veteran Service Building.

Researcher and content creator for the Minnesota Then Beer and Brewing History Museum.

The Twin Cities Brewery Boycott of 1935

Appreciation -- Twin City Brewery StyleJuly 12, 1935 Minneapolis Spkoesman. “When prohibition was repealed, it was thought that the reopening of employment in the brewing and distilling industry would be open in a larger measure to all American citizens, including the Negro. That this hope has not been realized in many localities may be illustrated by the fact that not a single brewery in Minneapolis or St. Paul has one of the Negro group in its employ,” ~ Cecil Newman.

The Highway Hi-Fi Record PlayerMac's Motor City Garage. In the years following World War II, the automobile firmly cemented its position as the king of travel in the United States. Urban sprawl, thanks in no small part to a rapidly ever-expanding highway system, moved people away from city centers, thereby keeping them in their cars longer than ever before as they traveled from point A to point B. Drivers had the AM radio to entertain them as they traveled but had little choice in what they listened to as they made their way down the road.

In 2011 the Surly Brewing Co, to meet growing customer demand, hoped to expand their operation by opening a new multi-million dollar facility in the Twin Cities. To recoup some of the costs associated with such a significant venture, they wanted to include a restaurant and beer garden. Their goal was to sell their beer to customers at the new site. However, according to Minnesota's liquor regulatory system enforced at that time selling beer on the proposed site was illegal.

SAINT PAUL, MN - The history of Saint Paul's Mears Park began on July 1849, when landowners Robert Smith and Cornelius Whitney passed the land known as the Whitney & Smith Addition to the public (there was no formal city of Saint Paul at the time). The park, known a short time later as Smith Park, was occupied by squatters until 1872 and shortly after became the first workhouse for the city. Law enforcement took vagrants and other lawbreakers serving less than fifteen days to Smith Park to break rocks until their sentences were up.

Prohibition, the Blind Pig's HopeOahu, Hawaii Evening BulletinIn the earliest days of alcohol enforcement, from the moment that public officials began to author legislation to control liquor flow, people looked for ways to circumvent those rules. One example of this is through the use of blind pigs and blind pig saloons.

The History of 'Rushing the Growler'

‘Rushing the Growler’ was a slang term that gained practical prominence in the late nineteenth century. It described the process of bringing an empty growler or growlers to a local tap house to be filled with alcohol — usually beer — and then carrying the container off-site to drink its contents.

President Roosevelt Signs the Relaxation of the Volstead ActPolitico. “I think this would be a good time for a beer.” - President Franklin Delano Roosevelt, (March 12, 1933)

Women’s Christian Temperance Union signDistant Innocence. The National Department of Scientific Temperance Instruction (STI) was an integrative scholastic effort created by the Women’s Christian Temperance Union (WCTU) that taught both the science of the human body and promoted temperance ideals designed to protect it. The program, eventually implemented in schools nationwide, made physiology and hygiene a compulsory part of classroom instruction as well as illustrated the adverse effects of alcohol on the human body. The goal of the program was to reach a generation of potential users before they’d developed an appetite for harmful vices.

SAINT PAUL, MN - In 1991 outgoing Governor Rudy Perpich commissioned artist Mark Balma to paint a portrait of him and his wife Lola to be placed on the walls of the State Capitol. This was (and is still) traditionally done to commemorate those who had served as the state's chief executive. The portraits were then hung on the walls of the Capitol building at the end of their term. Perpich, having served previously as governor, already had a painting. A "portrait war" ensued.

Samuel Huntington Morgan was born on February 21, 1911, in Duluth, Minnesota. At age 7, he and his parents moved to Saint Paul. Morgan was a long-time attorney and an ardent champion of Minnesota's outdoors. Due to his advocacy efforts, several of the state's most popular open spaces have been created, preserved, or expanded.

Was Hall-of-Fame Outfielder Dave Winfield Traded by the Minnesota Twins in 1994 for Dinner?

Dave Winfield, a native of St. Paul, is one of the top all-around athletes to come out of Minnesota.Star Tribune. Saint Paul native and Central High School and University of Minnesota great Dave Winfield had an illustrious professional baseball career that culminated with him being elected into the sport’s Hall of Fame in 2001.

SAINT PAUL, MN - When Mary Peek and her husband, Roland, went out to dinner at Saint Paul's Dayton's Department store restaurant on Saturday, August 22, 1970, neither knew the events of that day would change their lives forever.

The Life and Death of the St. Paul's "Notorious" Faust Theater

SAINT PAUL, MN - In the city's Thomas-Dale neighborhood, the Faust Theater, formerly located at 626 W. University Ave., was opened in 1911 by Henry J. "Heinie" Breilein. For a large part of its history, including a couple of ownership changes, ownership ran a quiet, family-friendly business.

The Shooting of Will Sidle: An 1877 Love Story that Turned Deadly on the Streets of Minneapolis

MINNEAPOLIS, MN - The story of Will Sidle and Kate Noonan began as a 19th-century tale of love that transcended society’s social barriers. In the end, it was one of unrequited love and revenge.

SAINT PAUL, MN - Locals were shocked when Saint Paul butcher and prominent local citizen Louis Arbogast was murdered. Arbogast, his wife, and four daughters lived a seemingly mundane, uneventful life in a large home near the city’s downtown. From the outside, they appeared to be nothing short of a happy family that loved each other a lot.

FALCON HEIGHTS, MINNESOTA - The 1946 Minnesota State Fair was an opportunity to celebrate an America that emerged victorious after World War II. Force to close in 1945 due to wartime fuel shortages, the state was ready to open its gates and celebrate the "Great Minnesota Get Together."

A Three Season Journey Comes to an End: The Minnesota Norsemen's Final Season (1979)

1979 Minnesota Norsemen Team GuideStirrups Now! Twitter Page. The success of 1978 carried the Norsemen into the 1979 season with a belief that big things were just around the corner for the team. They were the league runner-up and looked forward to building on that strong showing. They entered the new season hoping to bring a league championship home to St. Paul’s Midway Stadium.

Re-branding the Goofy's: the First Season of the Minnesota Norsemen (1978)

There were many changes for the Minnesota team leading up to the 1978 ASPSL season. Once known as the Goofy’s, the team was now the Norsemen. New owner Steve Doran had the financial means that former owner Joe Houle lacked, and ensured players and fans the money issues that caused the team to sputter in 1977 were a thing of the past.

Professional Slow-Pitch Softball Comes to Minnesota: The Inaugural Season of the Minnesota Goofy's (1977)

1977 Minnesota Goofy's Softball Team LogoFun While it Lasted. The game of softball has roots dating back to the late 19th century. Over the years, the popularity of the sport increased and by the 1970s it was the most popular participation sport in the country.

SAINT PAUL, MINNESOTA - One of the many unfortunate byproducts of the gangster era was everyday people getting caught in the crosshairs of criminal behavior. When that happened, unsuspecting bystanders had their lives changed forever, or worse, saw their end due to a flurry of bullets. A person rarely had a second chance to be in the wrong place at the wrong time.