St. Paul's First Bridge to Cross the Mississippi River, and the Annexation of West St. Paul 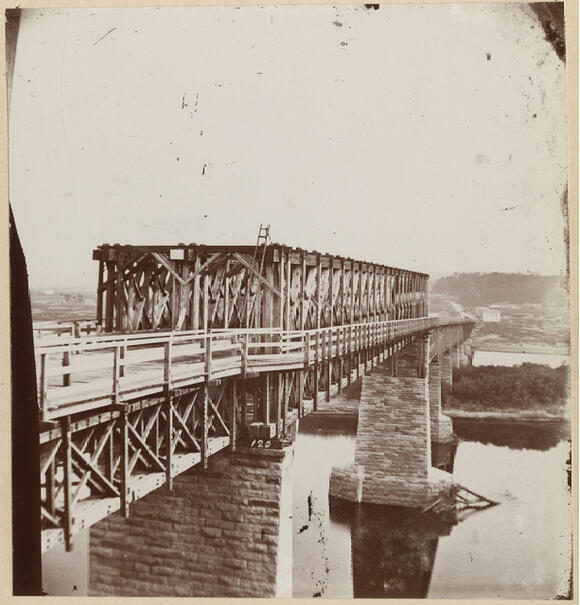 The Organic Act, passed by Congress on March 3, 1849, established a territorial government in Minnesota. On September 3 of that year, St. Paul was the site of the first local legislative session. The city was incorporated and declared the capital on November 1, 1849.

During the 1850s, the treaties of Traverse des Sioux and Mendota opened up southern Minnesota to settlement. A number of cities sprang up within a few years. It was difficult for newcomers to do business in the newly named state capital, St. Paul, from the south side of the river. The city of Hastings was quickly becoming a center of commerce for the surrounding area. A bridge was needed to connect the north and south banks of the river to continue St. Paul's growth.

The Territorial Legislature enacted a charter for the St. Paul Bridge Company on March 4, 1854. They were given a task to choose a location in St. Paul and build a bridge that crossed the river "from bluff to bluff". In accordance with the charter, no other bridge could be built within one mile of their completed bridge for a period of thirty-five years. At that point, the bridge would be jointly owned by Ramsey and Dakota counties.

In order to maintain the charter, the company had to begin construction within two years after signing the agreement. The St. Paul Bridge Company had difficulty selling its stock and was forced to request an extension from the Legislature. The Legislature agreed in March of 1856 to allow the company to begin work later that year. Construction began in fall, with a new deadline of four years instead of five.

Despite flooding in the Spring of 1857, work continued. Later that year, the company's financial problems reached a peak. In September an estimated 15 laborers and mechanics refused to work until their back wages were paid. Since the company couldn't meet those demands, it requested assistance from the city.

In March 1858, St. Paul leaders loaned the company $100,000 worth of city bonds to help pay its debts and continue construction. The St. Paul Bridge Company agreed to use the bridge property as collateral. If they could not pay the loan interest, they would relinquish the bridge to the city.

It was originally called "The St. Paul Bridge" and completed in June 1859. The project cost $165,855.81 with $115,000 of it funded by the city. This 1311-foot Timber Truss bridge was built almost entirely with lumber, keeping costs low. The bridge stretched from Wabasha Street to Bridge Street (later known as Dakota Avenue, then South Wabasha) across the river from St. Paul.

Crossing the bridge required a toll payment. Traditionally, foot passengers paid 10 cents, horses, mares, and mules 25 cents, and swine and sheep were 2 cents each. It turned out that people weren't using the bridge as much as the company expected and that they couldn't make their interest payments on the loan. As per their agreement, the city took control of the new bridge and used gate receipts (above expenses) to collect its debt. The city acquired full ownership of the bridge from the company in March 1867 for one-third of its stock value.

1858 marked the incorporation of West St. Paul. Its leaders expected it to become a manufacturing hub across the river from St. Paul. The bridge toll prevented this from happening. Residents of West St. Paul felt that the toll bridge burdened them more than other communities. City leaders thought the tolls were "inhibiting (the) development of the West Side..." They hoped their annexation into St. Paul would convince the city to end the toll requirement.

St. Paul had similar reasons to bring annexation into reality. City officials desperately wanted to reach across the river to the other side as well. They desired access to unused land, and also that annexation would "assist (their) law enforcement.". Criminals evaded capture by crossing the bridge out of the city’s jurisdiction. However, St. Paul was unwilling to lift the toll without anyone willing to contribute to maintenance. If the bridge toll remained, Dakota County will not relinquish West St. Paul.

By 1874, pro-annexation conversations became more prominent. As a result, it was only a matter of time before St. Paul agreed to remove the toll. A vote for the annexation of West St. Paul was held on November 3rd in both Ramsey and Dakota counties. The toll on the bridge was lifted as part of the agreement, allowing free traffic to travel from one side of the river to the other. The city of West St. Paul was annexed into Ramsey County at noon on November 18, 1874, and the bridge tolls were abolished.

The increased traffic on the bridge has prompted concerns over its structural integrity. Many of the bridge's weathered lumber spans were converted to iron during the 1870s and 1880s. Structural problems soon led to the reconstruction of the bridge. In 1889, work began alongside a temporary bridge. In August 1900, the new structure opened for traffic.

SAINT PAUL, MN -- One of Minnesota's most brutal and cold-blooded crimes occurred in a downtown Saint Paul butcher shop shortly after noon on February 18, 1905. At 12:05 PM, seventeen-year-old Walter Gerenz, delivery boy for Christian Schindeldecker's butcher shop at 523 West 7th St., walked home to have lunch. He returned forty minutes later to find the shop's front door bolted shut. Assuming his boss had stepped out, Gerenz went around back to enter.

Photo of Jennie and her sister Alice MatthewsLynn Blewett/Star TribuneMINNEAPOLIS, MN - The March 23, 1912, death of Alice Matthews shocked the city of Minneapolis. Attacked by a dark, brooding figure only a couple of doors from her home, she did everything possible to try to save her own life. Matthews fought bravely, but her cries for help went unheeded. Her case dominated local papers for a few weeks. However, the story eventually became old news, and her attacker was never found.