My name is Mark Elworth Jr. I'm a long time marijuana legalization activist. I'm from Nebraska and chairperson of the Legal Marijuana NOW Party of Nebraska.

This story is sponsored by the Legal Marijuana NOW Party of Nebraska.

The 4/20 Rally in Kearney, Nebraska was a successful event this year! The Legal Marijuana NOW Party of Nebraska held the 9th edition of this event on the busiest corner in town on the public sidewalk in front of Walgreens.

This year the LMN Party is celebrating its first year on the Nebraska ballot as as major political party with three pro-cannabis candidates to boot.

Celebration, cannabis pride, and overall good cheer was in the air as activists held up "Vote Marjiuana" and "Cannabis is Safer" signs in front of 1000s who where waiting in rush hour traffic during the 2 1/2 hour event.

Activists asked Nebraskans to vote for the LMN Party's candidates in the upcoming primary and general elections.

Approximately 50 supporters showed up to the 4/20 Rally. All of them took home signs to display their support in their house and car windows and literature on how to vote for Legal Marijuana NOW. 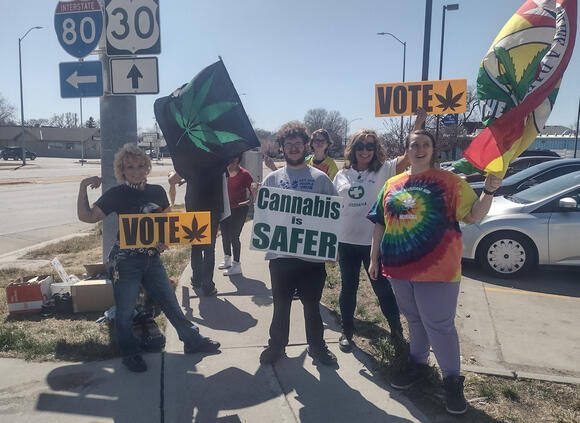 The Nebraska petition process is a continuous two-year cycle, with the next cycle starting in August 2022 and ending in July 2024 for the 2024 General Election ballot.

Some of the LMNP chairs and candidates were in attendance, including Krystal Gabel, the LMNP National Party Chair. She was thrilled with everyone coming out to support.

Mark Elworth Jr, US Congress D3 candidate, was in attendance as well. Mark is the Nebraska State Founder and State Chair of Legal Marijuana NOW Nebraska.

Dezi, the LMN Party's State Secretary, showed serious support by bringing her family to the 4/20 Rally in Kearney before they went to the 420 Snoop Dogg concert in Lincoln.

Dezi brings a lot of positivity to the Party and to all our events. She even donated the LMN lighters for our giveaway (that made nine winners really happy!).

She's collected signatures to get LMN on the ballot, helping us build the Party for quite some time.

The LMNP has three candidates on the ballot in 2022.

Mark Jr is running for US Congress, Larry Bolinger for State Attorney General, and Leroy Lopez for State Auditor.

Here are all your necessary LMN links:

My name is Mark Elworth Jr. I'm a long time marijuana legalization activist. I'm from Nebraska and chairperson of the Legal Marijuana NOW Party of Nebraska.

This story is sponsored by "Brush! Welcomes Everyone" Brush! is legally spelled with a exclamation mark(Photo Credit: City of Brush!, CO) Brush, Colorado is a vibrant city of 5,339 that is located on the high plains in the South Platte River Valley off I-76.

Where to find Amethyst in Kansas City?

This story is sponsored by Midwest Stones (http://midweststones.biz/). Amethyst Cathedrals(Photo Credit: IGM) The best priced and quality Amethyst is at Midwest Stones located inside The Brass Armadillo Antique Mall in Kansas City, Missouri.

Farm Hemp and Make CBD Oil for Profit in Nebraska

This story is sponsored by the Legal Marijuana NOW Party of Nebraska. The Big Question for farmers wanting to grow hemp: How much can be made? (Source: CBD Seeds) Nebraska passed the Hemp Farming Act on May 30, 2019. Hemp is now legal to farm and manufacture into products in Nebraska.

Rock Your World, Gem and Crystal Store Now Open in Lakewood and at the Mile High Flea Market

This story is sponsored by Rock Your World. Rock Your World is a rock and crystal shop with two locations and a selection of 1000s of stones. Happy customers at the Lakewood Colorado Retail Location.

This article is sponsored by Nebraskans for Third Parties. Scott Zimmerman, Libertarian candidate for Nebraska Governor, is hosting the LP Convention Kick Off in Lincoln on April 7, with the LP State Convention happening April 8 and 9 in North Platte.

The Lincoln Gem and Mineral Club's 62nd Annual Gem and Mineral Show, "Agates Around the World," is this weekend in Lincoln, Nebraska. Thousands are expected to attend with dozens of venders selling gems and minerals. Guest demonstrators will also be present to teach their lapidary specialties.

This story is sponsored by Midwest Stones. Large selection of amethyst is always available at Midwest Stones. Midwest Stones is Nebraska's best kept secreton where to purchase discounted gems and crystals. They have 11 fully packed cases in two of Nebraska's most popular and heavily visited antique malls:

In Nebraska this year, five statewide races for Executive Branch offices are on the ballot. A total of five Third-party candidates from the Libertarian and Legal Marijuana NOW Parties, respectively, have filed to run for four of these offices. The Nebraska Democrat Party is running only one candidate across all of these statewide races, further improving the chances of a Third-party candidate win.

The Legal Marijuana NOW Party of Nebraska is throwing a Rush Hour Rally in Lincoln, Nebraska. 48th and O street (on the sidewalk) The LMN Party will have all three of their 2022 candidates in attendance: