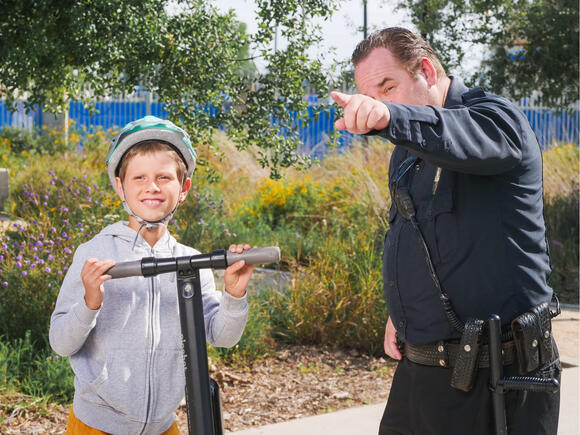 HOUSTON, TX — University of Houston Clear-Lake or UHCL alumna Karlie Hinkle has been working to educate UHCL University Police and Houston Police Department in efforts to prevent law enforcement officers from using unnecessary physical force or escalate problem behavior when attempting to get the compliance of individuals with Autism Spectrum Disorder.

Hinkle, who obtained Master of Arts from UHCL in 2020, creates and implements a training protocol that coaches officers on how to adapt their approach for people with autism.

In July, an article containing her training protocol was published in the Journal of Autism and Developmental Disorders. Through her research in 2017, she found that by the age of 21, nearly 20% of individuals with autism had been questioned or stopped by law enforcement, and 5% of those instances had ended with the person being detained.

Because of this data, Hinkle, now a graduate assistant pursuing her doctorate in industrial/organizational behavior management at Western Michigan University, affirmed that the training is necessary.

Hinkle's team did a pilot study involving an officer at UHCL, a middle school resource officer, and a chief of security from a community college. Those methods turned out to be effective, so, they moved the training to the Houston Police Department (HPD).

They had done a group training with 12 Houston police officers at a time, with six completing a role-play and lectures, and the second group of six officers who only obtained the training via a lecture format. They found that an autism-specific training should be supplemented with role-play to practice the steps they created from a checklist for the officers.

They worked closely with HPD when developing those steps, some of which they were already teaching in de-escalation training for their work with mentally ill people. The training's main component is to teach officers how to build trust and rapport to gain compliance from a person, and to try different methods to gain compliance before using physical means.

Crisis Intervention Trainer of HPD Travis Cogbill claimed that they have 40-hour, weeklong classes they offer to become certified as a CIT offers, and the advanced courses touch on hot topics in the community. Her training was incorporated into the regular 40-hour training.

The HPD trains about 100-120 officers a month. Police trainees who haven't yet graduated and are inexperienced are also taking the course which has been added up to three CIT classes taught once or twice a month, with up to 75 trainees per class.

The autism training brings them a different perspective because for many of them, it's the first scenario that exposed them to people with autism. Despite Hinkle not being around Houston anymore, they are still teaching her material. Officers who have been in this situation have told Cogbill they might have gone hands-on unnecessarily, but they recognized what was going on in time.

Officers don't have a way to track whether or not they've had an encounter with a person on the autism spectrum. So, they track their CIT calls which generally involve mental health issues, including autism. But, they can't say specifically what issue the officer is responding to. There are 45,000 mental health-related calls per year.

Cogbill noted that officers are not qualified to diagnose mental illness. They just need to realize there's a disorder going on so they can help those who are in need. He explained that the officers are learning to interact with people who are nonverbal, just to let them know they're here to help, and to ease their anxiety.

The HPD has specialized units specifically for mental health-related calls and Hinkle's training is so valuable because it supports what they're already teaching in de-escalation and active listening.

HOUSTON, TX — The Houston Independent School District has announced the appointment of Wanda Paul, a Houston native and a veteran business operations officer, as its new chief operating officer. Paul will begin her work in her new role on September 20.