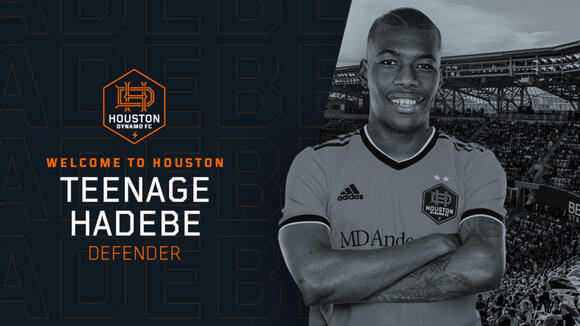 Houston signed the 25-year-old defender through the 2023 season, with a club option for the 2024 season. He can play center back and left back.

The Bulawayo, Zimbabwe native joins Houston after two seasons in Europe with Turkish side Yeni Malatyaspor. The 5-foot-11 defender appeared in 60 games for the Turkish side and scored two goals.

Hadebe's achievements in Turkey were a spot in Süper Lig Team of the Season honors following his first year and five Turkish Süper Lig Team of the Week honors during the 2020/2021 season. The left-footed central defender also featured in the UEFA Europa League qualifier in 2019, playing against Slovenia's Olimpija Ljubljana.

"After a lengthy process, we are very pleased to have secured the transfer of Teenage Hadebe to Houston. Teenage is a naturally left-footed center back with speed, athleticism, and an imposing presence," said Senior Vice President and General Manager Matt Jordan.

Jordan was pleased that Hadebe chose Houston Dynamo as his next destination. The Dynamo also like to thank Ed Segal for making this transaction possible.

Hadebe moved to Malatyaspor after two seasons with Kaizer Chiefs in South Africa's DStv Premiership from 2017 to 2019. The defender led the Chiefs to the Nedbank Cup final in 2019 and tallied an assist in the 2-0 victory over Cape Town City in the tournament quarterfinals.

He also represented the South African side in the CAF Confederation Cup, earning four appearances through the second round.

"Teenage is a player that we had been following for quite some time. His athletic ability and excellent speed made him one of the best defenders in the Turkish Super League and will be a perfect partner for Tim Parker as they grow together for years to come," said Dynamo head coach Tab Ramos.

Hadebe began his career in his hometown of Bulawayo with Bantu Tshintsha Guluva Rovers Football Club, where he played from 2012-2015. The 25-year-old defender then moved to Highlanders FC, still in Bulawayo, then joined Chicken Inn FC in 2017 before moving abroad.

With the addition of Hadebe, the Dynamo has 28 players on the roster, and all six international spots are occupied.